From Jamestown to Mars, it Takes Explorers with Imagination 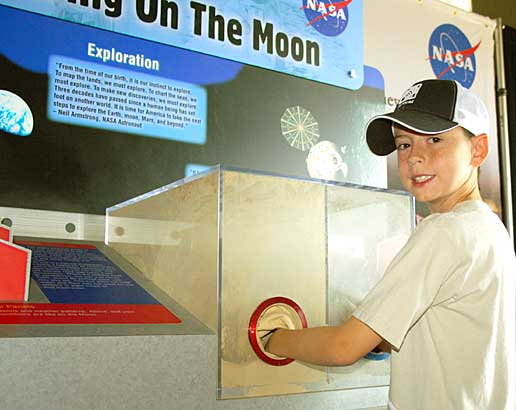 Image above: Getting the dirt on exploration, Kyle Wallace of Evansville, Indiana, feels the difference between a soil sample from earth and a replicated batch of moon dust in the NASA exhibit at AirVenture. NASA photo

Four centuries ago, pioneers from England were humbled by the elements as they struggled to maintain a community at Jamestown on Chesapeake Bay. They learned from their mistakes and they learned from successful native Americans that exploration is not for the timid or the unimaginative.

At AirVenture this year, NASA draws parallels from this historic example to explain the passion that fuels the agency's vision for space exploration. A display in the NASA building compares a 17th century astrolabe, a tool mariners used to sail the seas, to modern global positioning system hardware. The threshold of technology drives the level of exploration that can be accomplished, moving the world from a seafaring age to a spacefaring era, planning for a return to the moon.

Didier Rault, an atmospheric scientist from NASA's Langley Research Center, staffs the agency's Jamestown exhibit at AirVenture with a single-minded passion for exploration. He delights in sharing the spark of exploration with children, confident they are the ones who will bring present scientific notions to fruition. "I think anybody who does research is an explorer," Didier says, broadening the concept to include more than just those on the pointy end of the rocket.

Didier's display includes two boxes, one containing earth soil and another replicating moon dust. Visitors may thrust a gloved hand into each box to feel the differences. Where the Jamestown settlers had to grapple with sandy soil that hampered crops, lunar visitors who want to stay for any time will need to accommodate the severely abrasive properties of moon dirt, created by the driving energy from countless impacts by meteorites.

But there's a hidden bonus in the seemingly sterile moon dust: it contains as much as 40 percent oxygen, and NASA scientists anticipate mining this unlikely pay dirt to supply lunar explorers with breathing oxygen.

Didier likes to segue from Jamestown to Lewis and Clark as he describes the benefits of exploration. Few would dispute the global impact of Lewis and Clark's pathfinding journey west, and yet, he says, the duo were trying to give the United States a leg up in the fur trade. That goal is extinct, but the benefit of their exploration lives on. It is that sense of an optimistic unknown that drives explorers like Didier on.

"We might not know exactly why" humans need to return to the moon until we actually get there for an extended period, he explains. "Once they get there, people are going to get ideas," he enthuses. He envisions extended collaborations between private industry and NASA to capitalize on what explorers will find on the moon.

To run with the optimists, a visit to the NASA building at AirVenture is always in order. Just go visit; you might not know why until you get there.