Larry Huebner Could Help you go to the Moon 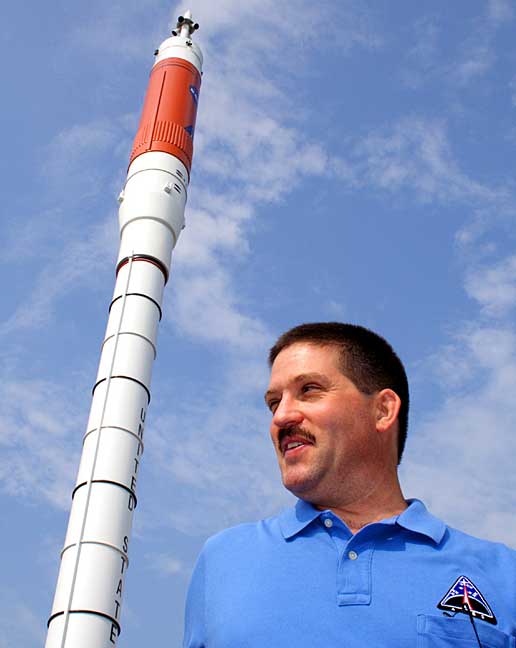 Image above: Larry Huebner of NASA's Marshall Space Flight Center stands next to the Ares I model at Oshkosh. NASA photo

It's reasonable to believe the sea of aerospace-savvy faces at AirVenture includes visitors who will one day set foot on the moon. And NASA's Larry Huebner is here to help.

Huebner is a NASA engineering manager helping to shape the Ares I and Ares V rockets that will supplant the space shuttle and return humans to the moon for extended stays. He has a Forum on that topic scheduled for 10 a.m. Saturday in Forum Pavilion 10.

Has the Ares concept changed since last year? "To a man on a fast horse, the configurations look the same" this year, he says, adding that some subtle key differences are emerging as the design matures. Huebner's task of helping create a viable vehicle system must mesh with another team's requirement to create the ballistic Orion space capsule, larger than Apollo, to carry humans into space. "The biggest changes that are going on right now are at the front end," he explains, where the needs of Orion must be accommodated. Current studies predict Orion could be subjected to more than 160 decibels of acoustic loading – noise created by shapes in the design – that could damage the capsule unless steps are taken to mitigate this phenomenon. Huebner's confident the acoustic signature can be tamed.

NASA seeks a smooth path to the moon and Mars by using proven components to create the Ares system. Ares I will use segments of solid rocket boosters like those employed on the space shuttle now. Ares will stack five segments for its mission; each shuttle booster uses four. Ares V will be a bigger heavy lift vehicle for cargo only. Together, Huebner explains, it will be possible to launch humans into low earth orbit aboard an Orion Ares I, and launch cargo and science modules on Ares V, to be mated to the Orion capsule for the ride to the moon or beyond. Some in NASA are considering sending unmanned Ares V loads to Mars, where they would remotely deploy living quarters before the arrival of human explorers.

But for all the economy of using existing shuttle motors for Ares, the necessary addition of another segment to the stack means the stretched model must be tested to ensure its aerodynamic performance in the atmosphere is predictable. Huebner is excited about the first Ares launch, currently set for April 2009 that will boost a four-segment first stage and an anatomically correct dummy upper stage into a Mach 4.5 suborbital trajectory. The first stage, intended to be recovered and re-used like shuttle boosters, will be as long as a production model so engineers like Huebner can validate its ballistic traits as it tumbles back through the atmosphere. That's what Huebner needs to ensure – tumbling – to keep an otherwise stable booster from baking on one side as it encounters atmospheric heating. This really is rocket science, folks. Huebner says he is packing some discussion of rocket aerodynamics into his Forum presentation Saturday in acknowledgment of the AirVenture audience's predisposed taste for such things.

A quick look at the Ares I model shows the Orion launch abort/escape mechanism to be configured differently than its Apollo predecessor. Where Apollo's escape rockets were offset above the capsule, with their solid propellant above them in a traditional configuration, NASA is looking to put the propellant below the nozzles on Orion, with the exhaust making a U-turn as it exits to pull Orion away from Ares in event of an emergency. The space above the nozzles in the abort rocket spike can be filled with other gear now, Huebner says.

He says the Orion/Ares combo is forecast to have significantly greater safety than the space shuttle, due in part to the presence of a launch escape rocket system to boost the Orion crew capsule clear of a malfunctioning Ares, should that ever occur. The traditional capsule-and-rocket configuration of Ares I adds to this safety margin, Huebner says, putting the people in the Orion at the top of the stack, far away from the "energetics" (his rocket-scientist term for rocket fuel, for those of us still wrestling with programming our TV remote controls).

Ares is also premised on an updated version of a rocket motor originally used for Apollo missions. This upper stage engine's development should save some time and money too, by using a proven technology.

So where do we stand at this point? Huebner says flight tests of Ares will begin in April 2009, with a full-up five segment Ares I probably launching in 2012, and the first Ares I-boosted Orion visiting the International Space Station as soon as 2014. An Ares V plus Ares I combo could visit the moon by 2020. Mars may be attainable 10 years after that. The Ares family has a long and bright future. Huebner is happy to be where he is, on the ground floor of the program. "The timeline is set for me to be able to see the launch vehicle architecture for generations," he explains. "And that's pretty exciting – to be on the front end of that."