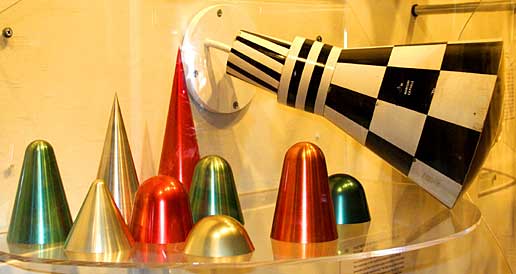 Image above: Nose cones of various shapes, sizes, and colors are displayed at the EAA Museum exhibit during this year's AirVenture 2007. NASA photo

Sawtooth helicopter blades that muffle the "whop! whop!" and elegant wind tunnel models that are a fusion of sculpture and engineering set the tone for an exhibit of NASA aerodynamic shapes in the EAA Museum during AirVenture 2007.

The immutable laws of physics must be heeded. NASA designers have interpreted how to use physics to achieve safer, quieter, faster, more efficient airplanes for many decades. It's a collaboration of nature and humanity showcased in "Aerospace Design - The Art of Engineering From NASA's Aeronautical Research", a traveling exhibit that pauses in the EAA Museum until October.

Some of the displayed items are gleaming works of art in their own right; others carry utilitarian engineering markings and grids vital to informing designers how a real aircraft based on this technology would perform. You can almost hear the wheels turning in the mind of legendary NASA engineer Richard Whitcomb as you come face-to-face with a wind tunnel model of the F-8 Crusader modified with a supercritical wing. This validated Whitcomb's notion that later flew on a full-size NASA F-8, before entering mainstream design philosophy in many of today's jetliners, improving performance at high cruise speeds.

A craftsmanlike wooden biplane model from the 1920s is accurate down to features on the face of the miniature pilot in the open cockpit. Much of the work of the NACA – the National Advisory Committee for Aeronautics which preceded NASA—created a baseline of data on general aircraft efficiencies. Understanding the drag induced by uncowled radial engines led to the NACA's development of cowlings that increased efficiency and cooling, critical to exploiting ever-more powerful engines of the 1930s.

Many of the rocket shapes that have lofted Americans into space are instantly recognizable in this unique assemblage of functional art; even moon rockets must leave and return through the atmosphere, and that affects their design.