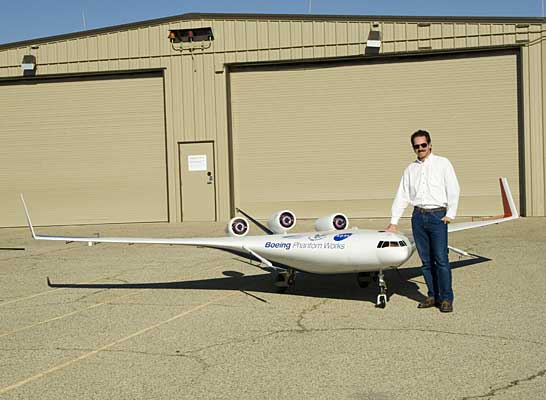 Nine-year-old Gary Cosentino watched the television with awe on July 20, 1969, as two men exited an odd-looking craft called the Eagle lunar module, climbed down a ladder and set foot on the moon.

When astronauts Neil Armstrong and Buzz Aldrin became the first men to walk on the surface of the moon during the Apollo 11 mission, it was an event that went on to inspire Cosentino, like many others, to seek out a career in aerospace. But few have had the opportunity to shake hands with one of the living legends who helped set the course of their lives.

Cosentino has now had that privilege.

"I was watching you guys when I was 9," Cosentino told Aldrin when the famed astronaut visited NASA's Dryden Flight Research Center recently. "That's why I'm here today. If it wasn't for you I'd be doing something else."

Cosentino, now NASA's project manager for the X-48B Blended Wing Body flight research at Dryden, jumped at the chance to tell one of his idols everything that series of events has meant to his life.

"I have always wanted to say those words to someone from that era," Cosentino reflected. "I've had a chance to meet two of them, Vance (Brand) and now Buzz. I probably would not be here today in this field, working for NASA, if it wasn't for the impression they made on me in those years when I was watching every launch."

That impression led Cosentino to pursue an undergraduate degree in aerospace engineering at the University of Arizona, awarded in 1982, followed by a masters in the same discipline from the University of Colorado two years later.

After a short time as a propulsion engineer for General Dynamics' Convair division, Cosentino was hired by NASA Ames Research Center near San Jose, Calif., as an aerospace engineer specializing in computational fluid dynamics. He worked on various aircraft and propulsion configurations, including design work on the subscale NASA/Boeing X-36 Tailless Fighter Agility Research Aircraft.

Cosentino transferred to NASA Dryden January 1998 as project manager for the X-36 flight test project, and also was given project management responsibilities for other unmanned technology demonstration aircraft, including the Altus II and Perseus B. After 6 ½ years leading the planning and flight test effort for the X-45A UCAV (J-UCAS), Cosentino was then assigned to his current role with the X-48B.

Aldrin, now 77, spent about three and a half hours touring NASA Dryden and several of its current projects, including a spin in the Blended Wing Body simulator's pilot's chair. He was then treated by Air Force representatives to a tour of the Air Force Flight Test Center at Edwards Air Force Base, where he served as commandant of the Air Force Test Pilot School for a year after his stint as a NASA astronaut. He was in the area to be honored by the Lancaster JetHawks baseball team that evening during the ball club's annual Aerospace Appreciation Night.

"It was really an honor to meet a guy like that, who did so much and definitely charted a course for my future without ever knowing it," Cosentino concluded.