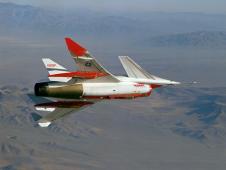 From mid-1979 to January 1983, two remotely piloted, experimental Highly Maneuverable Aircraft Technology (HiMAT) vehicles were used at the NASA Dryden Flight Research Center at Edwards, Calif., to develop high-performance fighter technologies that would be applied to later aircraft. Each aircraft was approximately half the size of an F-16 and had nearly twice the fighter's turning capability.

HiMAT research at Dryden was conducted jointly by NASA and the Air Force Flight Dynamics Laboratory, Wright-Patterson Air Force Base, Ohio. Because the planes were controlled from a ground station, experimental technologies and high-risk maneuverability tests could be employed without endangering pilots. The aircraft were flown 26 times during the 3 1/2 year history of the program.

HiMAT experiments provided information on integrated, computerized controls; design features such as aeroelastic tailoring, close-coupled canards and winglets; the application of new composite materials; a digital integrated propulsion control system; and the interaction of these then-new technologies with one another.

HiMAT Design
The partners in the design of the two HiMAT vehicles were NASA's Ames Research Center, Moffett Field, Calif., and Dryden Flight Research Center and the contractor, Rockwell International. The three partners sought to bring the vehicles into flight status quickly by eliminating many tests that would have been required for a piloted vehicle. They took a high-risk approach to design by extensive use of unproven computational design tools developed at Ames. This resulted in a drastic reduction of wind-tunnel testing times but made it necessary to devote several flights to deriving stability and control data. 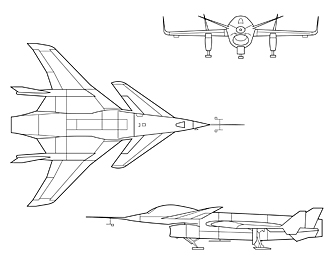 The HiMAT plane's rear-mounted swept wings, digital flight control system, and forward controllable canard made the plane's turn radius twice as tight as that of conventional fighter planes. At near the speed of sound and at an altitude of 25,000 feet, the HiMAT vehicle could substain an 8-G turn (that is, one producing acceleration equal to 8 times that of gravity). By comparison, at the same altitude, an F-16's maximum sustained turning capability is about 4.5 Gs.

The HiMAT vehicle was 23.5 feet long, with a wingspan of just under 16 feet. It was powered by a General Electric J-85-21 turbojet, which produced 5,000 pounds of static thrust at sea level. At launch, the HiMAT planes weighed 4,030 pounds (including 660 pounds of fuel). They had a top speed of Mach 1.4 (1.4 times the speed of sound). About 30 percent of the materials used to construct the aircraft were experimental composites, mainly fiberglass and graphite-epoxy. The cost of both vehicles was $17.3 million.

The small aircraft were launched from NASA's B-52 carrier plane at an altitude of approximately 45,000 feet. Each HiMAT plane had a digital on-board computer system and was flown remotely by a NASA research pilot from a ground station with the aid of a television camera mounted in the cockpit. There was also a TF-104G chase aircraft with backup controls if the remote pilot lost ground control.

Flying the HiMAT from the ground cockpit, using the microprocessor-based digital fly-by-wire control system, employed control techniques similar to those used in conventional aircraft. However, design of the vehicle's control laws had proved to be extremely challenging. After the research portion of the flight concluded, the pilot would land the HiMAT plane on the dry lakebed adjacent to Dryden. 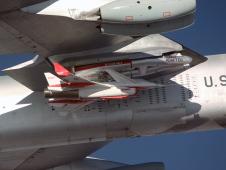 HiMAT subscale research vehicle mated to B-52 mothership in flight

An interesting aspect of the HiMAT program was the flight test maneuver autopilot, which was based on a design developed by Teledyne Ryan Aeronautical. Teledyne also developed the backup flight control system for the aircraft (with modifications done by Dryden engineers). The autopilot system provided precise, repeatable control of the vehicle during prescribed maneuvers so that large quantities of reliable test data could be recorded in a comparatively short period of flight time. Dryden engineers and pilots tested the control laws for the system, developed by the contractor, in a simulation facility and then in flight, adjusting them to make the system work as intended.

Once adjusted, the autopilot was a valuable tool for obtaining high-quality, precise data that would not have been obtainable employing standard piloting methods; the autopilot enabled the pilot to control multiple parameters simultaneously and to do so within demanding, repeatable tolerances. As such, the flight test maneuver autopilot showed itself to be a broadly applicable technique for flight research with potential benefit to any flight program.

The three-phase HiMAT project began in 1973. In August 1975 Rockwell International was awarded a contract to construct two HiMAT aircraft. The aircraft allowed researchers to test advanced technologies at a reduced cost. The goals of HiMAT included a 100 percent increase in aerodynamic efficiency over 1973 technology and maneuverability that would allow a sustained 8-G turn at 0.9 Mach and an altitude of 25,000 feet. The program achieved both goals.

The HiMAT project represented a shift in focus by researchers at Dryden. Through the Vietnam era, the crux of fighter research had been speed. In the 1970s, driven by a national energy crisis, new digital technology, and a changing combat environment, researchers sought to develop efficient research models for experiments into the extremes of fighter maneuverability. As a result, the quest for speed, long considered the key component of successful air combat, became secondary.

One of the HiMAT project's important contributions to flight technology was the use of new composite materials in structural design. HiMAT engineers used materials such as fiberglass and graphite to strengthen the plane and allow it to stand up to the high G-force conditions it encountered during maneuverability tests. Knowledge gained in composite construction from HiMAT strongly influenced other advanced research and the materials are now used extensively on commercial and military aircraft.

The X-29 employed much of the technology developed from HiMAT research, including the successful use of the forward canard and the rear-mounted swept-wing constructed from light-weight composite materials. The wing allowed for vast increases in maneuverability.

Experiments with small wingtip fins known as winglets were also conducted on HiMAT planes. Winglets, which reduce drag and can dramatically increase airplane fuel efficiency, are used extensively on private and commercial aircraft.

The two research planes are now on exhibit, one at the NASA Dryden Flight Research Center and the other at the Smithsonian Institution's National Air and Space Museum.