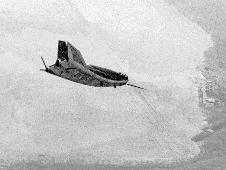 The HL-10 Lifting Body is seen here in flight over Rogers Dry lakebed.

Wingless lifting bodies attained aerodynamic stability and lift from the shape of the vehicle. Lift resulted from more air pressure on the bottom of the body than on the top. They used energy and aerodynamic lift for in-flight maneuvering and a powerless, glider-like landing.

The idea of lifting bodies was conceived in 1957 by Dr. Alfred J. Eggers Jr., then the assistant director for Research and Development Analysis and Planning at NASA's Ames Research Center, Moffett Field, Calif.

The lifting body concept was originally tested at Dryden with a plywood prototype designated the M2-F1 and built in late 1962. It featured a plywood shell built by Gus Briegleb, a sailplane builder from Mirage Dry Lake, Calif., placed over a tubular frame built at Dryden. The M2-F1 was towed aloft, first behind an auto and then a C-47 more than 100 times, to validate basic lifting body stability and control characteristics. This led to establishment of the formal program which resulted in the HL-10 and its sister vehicles.

Northrop Corporation built the HL-10. The contract for construction of the HL-10 and the M2-F2, first of the fleet of lifting bodies flown at Dryden and also built by Northrop, was $1.8 million. "HL" stands for horizontal landing, and "10" refers to the tenth design studied by engineers at NASA's Langley Research Center, Hampton, Va.

The HL-10 was delivered to NASA in January 1966. During the next 10 months it was instrumented for the research program and prepared for flight. The HL-10 and the M2-F2 were tested in wind tunnels at Ames before research flights began.

First flight of the HL-10 was on Dec. 22, 1966, with research pilot Bruce Peterson in the cockpit. Although an XLR-11 rocket engine was installed in the vehicle, the first 11 drop flights from the B-52 launch aircraft were powerless glide flights to assess handling qualities, stability and control. 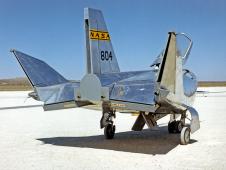 HL-10 is shown on the lakebed with its subsonic control surface configuration.

During a typical lifting body flight, the B-52 -- with the research vehicle attached to the pylon mount on the right wing between the fuselage and inboard engine pod -- flew to a height of about 45,000 feet and a launch speed of about 450 mph.

Moments after being dropped, the XLR-11 rocket engine (same type engine used in the Bell X-l) was ignited by the pilot. Speed and altitude increased until the engine was shut down by choice or fuel exhaustion, depending upon the individual mission profile. The lifting bodies normally carried enough fuel for about 100 seconds of powered flight and routinely reached altitudes of 50,000 to 80,000 feet and speeds above Mach 1.

Following engine shutdown, the pilot maneuvered the vehicle through a simulated return-from-space corridor into a pre-planned approach for a landing on one of the lakebed runways on Rogers Dry Lake at Edwards. A circular approach was used to lose altitude during the landing phase. On the final approach leg, the pilot increased his rate of descent to build up energy. At about 100 feet altitude, a "flare out" maneuver dropped air speed to about 200 mph for the landing.