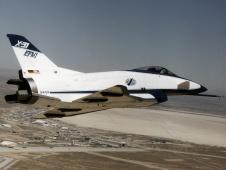 The first X-31 flies over Edwards Air Force Base, California, in 1993.

Angle of attack -- AOA or alpha -- describes the angle of an aircraft's wings relative to the oncoming wind direction, or the path of the aircraft's flight. In the X-31, the maximum angle of attack at which airflow could be maintained over the wings in normal flight was 30 degrees nose-up from the aircraft's direction of flight, beyond which the aircraft would stall. Flying in the post-stall regime – flying at angles of attack greater than the maximum – was achieved in the X-31 when thrust vectoring was combined with advanced digital flight controls.

Three thrust-vectoring paddles mounted on the X-31's airframe adjacent to the engine exhaust nozzle directed the exhaust flow to provide control in pitch and yaw. Made of carbon-carbon, the paddles could sustain temperatures of up to 1,500 degrees C for extended periods. In addition the X-31s were configured with movable forward canards and eventually with fixed aft strakes. Both supplied additional pitch control in tight maneuvering situations. 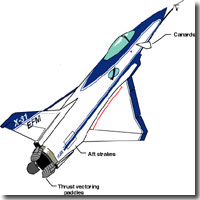 During the program's initial phase of operations at Rockwell International's Palmdale facility, pilots flew the aircraft on 108 test missions. They achieved thrust vectoring in flight and expanded the post-stall envelope to 40 degrees angle of attack before flight operations were moved to NASA Dryden in February 1992 at the request of the Defense Advanced Research Projects Agency.

At Dryden an international team of pilots and engineers pitted the X-31 against comparable but non-thrust-vectored aircraft to evaluate the maneuverability of the X-31 in simulated air combat. The test team included NASA, the U.S. Navy, the U.S. Air Force, Rockwell Aerospace, the Federal Republic of Germany, and Daimler-Benz (formerly Messerschmitt-Bolkow-Blohm and Deutsche Aerospace). The X-31s outperformed other aircraft lacking thrust vectoring through use of post-stall maneuvers, and achieved a potential kill ratio of 30 to 1.

On April 29, 1993, the second X-31 successfully executed a minimum radius, 180-degree turn using a post-stall maneuver, flying well beyond the aerodynamic limits of any conventional aircraft. The revolutionary maneuver has been dubbed the "Herbst Maneuver," for Wolfgang Herbst, a German proponent of using post-stall flight in air-to-air combat.

The first X-31 aircraft was lost in an accident Jan. 19, 1995. The pilot, Karl Heinz-Lang, ejected safely before the aircraft crashed in the desert just north of Edwards. Investigation indicated the crash resulted from ice accretion in the nose boom, which was not heated. The ice accumulation reduced the internal diameter of the data probe, which in turn led to incorrect data reaching flight computers. The result was an uncontrollable aircraft. Following the pilot's ejection, the X-31’s flight computers fought to regain control of the aircraft, which alternated between erratic and momentarily controlled flight until it struck the ground. 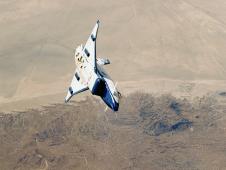 The X-31 program logged an X-plane record of 580 flights, 559 research missions and 21 demonstration flights at the 1995 Paris Air Show, where its performance wowed the crowds. The X-31 program was the first international experimental aircraft development program administered by a U.S government agency.

The X-31 design speed was Mach 0.9 with an altitude capability of 40,000 feet. For specific tests to determine thrust vectoring effectiveness at supersonic speeds the aircraft was flown to Mach 1.28 at an altitude of 35,000 feet.