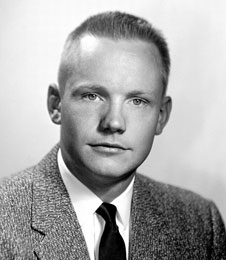 Neil A. Armstrong
Neil A. Armstrong joined the National Advisory Committee for Aeronautics (NACA) at the Lewis Flight Propulsion Laboratory (later NASA's Lewis Research Center, Cleveland, Ohio, and today the Glenn Research Center) in 1955. Later that year, he transferred to the NACA's High-Speed Flight Station (today, NASA's Dryden Flight Research Center) at Edwards Air Force Base in California as an aeronautical research scientist and then as a pilot, a position he held until becoming an astronaut in 1962. He was one of nine NASA astronauts in the second class to be chosen.

Armstrong was actively engaged in both piloting and engineering aspects of the X-15 program from its inception. He completed the first flight in an X-15 aircraft after it was equipped with a new airflow-direction sensor in its nose, as well as the initial flight in another X-15 equipped with a self-adaptive flight control system. He worked closely with designers and engineers in development of the adaptive system, and made seven flights in the rocket plane from December 1960 until July 1962. During those fights he reached a peak altitude of 207,500 feet in the X-15-3, and a speed of 3,989 mph (Mach 5.74) in the X-15-1.

Armstrong has a total of 8 days and 14 hours in space, including 2 hours and 48 minutes walking on the Moon. In March 1966 he was commander of the Gemini 8 orbital space flight with David Scott as pilot of the first successful docking of two vehicles in orbit. On July 20, 1969, during the Apollo 11 lunar mission, he became the first human to set foot on the Moon.

From 1969 to 1971 he was Deputy Associate Administrator for Aeronautics at NASA Headquarters, and resigned from NASA in August 1971 to become Professor of Engineering at the University of Cincinnati, a post he held until 1979. He became Chairman of the Board of Cardwell International, Ltd., in Lebanon, Ohio, in 1980 and served in that capacity until 1982. During the years 1982-1992, Armstrong was chairman of Computing Technologies for Aviation, Inc., in Charlottesville, Virginia. From 1981 to 1999, he served on the board of directors for Eaton Corp. He served as chairman of the board of AIL Systems, Inc. of Deer Park, New York, until 1999 and in 2000 was elected chairman of the board of EDO Corp., a manufacturer of electronic and mechanical systems for the aerospace, defense and industrial markets, based in New York City.

From 1985 to 1986, Armstrong served on the National Commission on Space, a presidential committee to develop goals for a national space program into the 21st century. He was also Vice Chairman of the committee investigating the Space Shuttle Challenger disaster in 1986. During the early 1990s he hosted an aviation documentary series for television entitled First Flights.

Armstrong has been the recipient of numerous awards, including the Presidential Medal for Freedom and the Robert J. Collier Trophy in 1969; the Robert H. Goddard Memorial Trophy in 1970; the Congressional Space Medal of Honor in 1978; and many medals from other countries.

Armstrong died on Aug. 25, 2012 at the age of 82 due to complications relating to recent cardiovascular bypass procedures.

For more information on Armstrong's career as an astronaut click on the following link: http://www.hq.nasa.gov/office/pao/History/ap11ann/astrobios.htm