Ramjets operate by subsonic combustion of fuel in a stream of air compressed by the forward speed of the aircraft itself, as opposed to conventional turbojet engines, in which the compressor section (the fan blades) compresses the air. In comparison to turbojets, ramjets have no moving parts.

Scramjets (supersonic-combustion ramjets) are ramjet engines in which the airflow through the whole engine remains supersonic. Scramjet technology is challenging because only limited testing can be performed in ground facilities. Long duration, full-scale testing requires flight test speeds above Mach 8. Hyper-X will build knowledge, confidence and a technology bridge to very high Mach number flight. 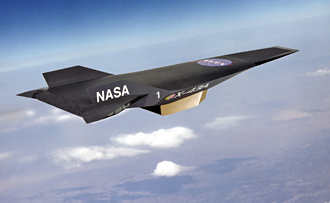 The fuel for X-43 will be hydrogen. Rockets carry their own oxygen for combustion; an air-breathing scramjet engine burns oxygen scooped from the atmosphere. Scramjets, therefore, get their oxygen in the same manner as normal jet engines do. Utilizing conventional turbojet technology, air-breathing hypersonic vehicles should carry more cargo/payload than equivalent rocket-powered systems, due simply to having more weight and payload space available because of not having to carry oxidizer on-board.