Handling Qualities and Agility Research on the F-18 HARV 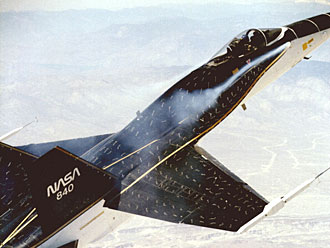 The F-18 High Angle-of-Attack Research Vehicle (HARV) is currently evaluating advanced control laws, handling qualities criteria and agility in the high angle-of-attack flight regime. The HARV was modified to include thrust vectoring and a research flight control system. The thrust vectoring system allows the HARV to maneuver up to 65 deg angle of attack, and trim (steady-state) to 70 degree angle of attack. 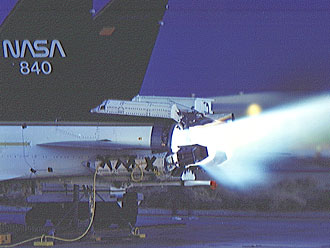 Until recently, high angle of attack investigations were mainly concerned with prevention of post-stall departure, providing spin resistance, or developing spin recovery procedures. With the advent of aircraft equipped with thrust vectoring systems, post-stall departure is controlled, and aggressive maneuvering at elevated angle of attack is a reality. The flight test objectives for the F-18 HARV include qualitative and quantitative evaluation of advanced control laws, improved maneuvering capability (agility), and handling qualities in the high angle-of-attack flight regime.

The examples below illustrate two flight maneuvers, unique to post-stall maneuvering, that were flown at the Dryden Flight Research Center during the handling qualities evaluation. 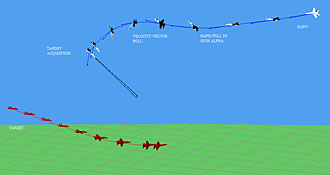 The figure above is a reconstruction, from flight data, of a post-stall reversal (also known as a Herbst Turn or J-Turn). The black and white vehicle is the HARV, while the red vehicle is a NASA chase F/A-18. The velocity vector of the HARV clearly shows the rapid onset of angle of attack (maximum alpha is approximately 60°) just before the velocity vector roll and target acquisition (shown by the projected square). The overall maneuver takes about 17 seconds. Click here for a transcript of pilot comments 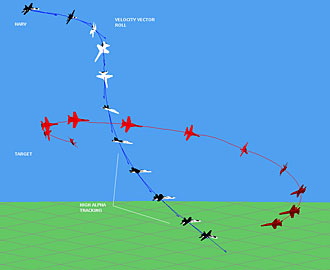 The second figure shows a flight reconstruction of an offensive spiral (also known as a helicopter gun attack) where the HARV acquired the target at the end of a high alpha reversal, and continued to track the target for about 10 seconds in the 50 deg-60 deg angle of attack range. Notice that the HARV stays essentially at the center of the loaded turn being flown by the target (top-view Figure 3). 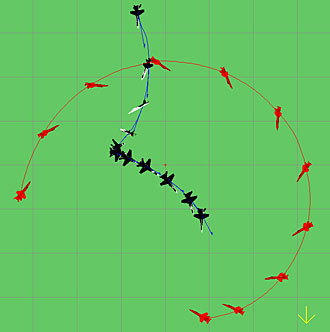 Although the HARV began the maneuver with about 5000-ft altitude advantage, the HARV is actually below the target by the end of the maneuver. This maneuver illustrates the significant energy loss associated with sustained high angle of attack maneuvering. Click here to view flight data [XPLOT ONLY]. A brief description of the signals available in the flight data is listed here.

Flying qualities investigations are being conducted to evaluate high-alpha criteria for gross-acquisition and fine-tracking. These maneuvers have also been used to point out deficiencies in control laws designs.