Two other steam turbines, called auxiliary power units, each furnished hydraulic pressure and the electrical power for the X-15. Their propellant also was decomposed hydrogen peroxide. Liquid nitrogen was used for cooling the payload bay, cockpit, windshields, and nose. Steam rockets in the nose and wings provided altitude control when out of the atmosphere.

(SLIDE 5) is a view of the cockpit. Outlined are three flight controllers. The center stick provided conventional pitch and roll control, and was intended for use after engine burnout. Mechanically linked to the center stick was a right hand controller used during the boost. When the pilot was using the side controller, the back of his right elbow was braced to not allow aft movement; this prevented the mass of the pilot's forearm and hand from causing spurious pitch inputs in the acceleration field existing during boost. On the left side of the cockpit was a three-axis ballistic controller, which was mechanically linked to steam rockets in the nose and wings. 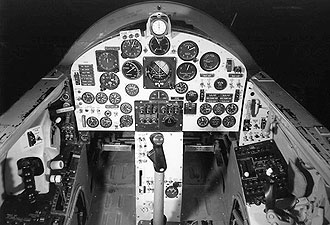 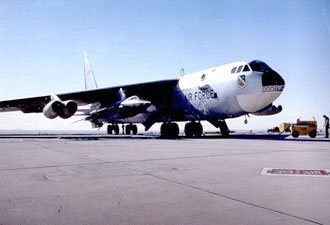 
On the instrument panel was an attitude indicator whose source was inertially derived. Also provided were inertial velocity, altitude, and rate-of-climb. Barometric instruments included an altimeter and a combined Mach-airspeed indicator; these instruments were usable only below about 75,000 feet and were used mainly in the traffic pattern. An angle of attack and a sideslip indicator were provided; the source of these two instruments was selectable, inertial for high altitude flight and barometric for the end of the mission.

The X-15 was actually the second stage of a two-stage system (SLIDE 6) The first stage was a B-52 bomber, specially modified for the program, which carried the X-15 uprange into Nevada, pointed it towards Edwards, and launched it at 45,000 feet and 0.8 Mach number.

The next slide (SLIDE 7) shows a typical X-15 mission, in which the X-15 was launched about 200 miles from Edwards. The engine was lit immediately after launch and burned for about 85 seconds. During that period, it would boost the X-15 to an altitude of 160,000 feel and a Mach Number of 5.4. The X-15 would then coast to 250,000 feet, reenter, and glide to a landing on the dry lake at Edwards. A typical X-15 flight lasted eleven minutes, including about four minutes in the traffic pattern. 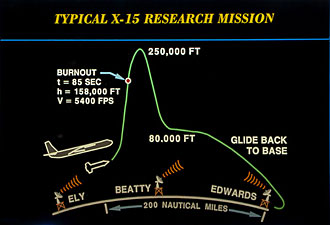 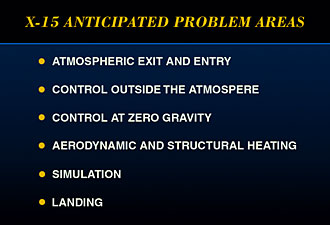 
The X-15 first flew on June 8, 1959, and within four years had completed all the objectives of the original research program. It reached a Mach number of 6.06, which due to weight growth was less than the Mach 6.6 design speed, but it also reached an altitude of 354,000 feet, some 40 percent higher than the program goal of 250,000 feet. The altitude capability was made possible by the blended aerodynamic and reaction controls of the self-adaptive flight control system in the X-15 No. 3. (Only X-15 No. 3 flew significantly above 250,000 feet.)

The next slide (SLIDE 8) lists some of the problems anticipated for the X-15 prior to the first flight and the next few minutes will describe how the X-15 fared in these areas.