Part of the Charles A. Lindbergh Lecture at the National Air and Space Museum, Smithsonian Institution by X-15 pilot Bill Dana

The X-15 flew to an altitude of 354,000 feet and reached a Mach number of 6.70. It flew its last flight over thirty years ago, but to this day, except for the Space Shuttle no aircraft has flown half as high nor half as fast. The late Dr. Hugh L. Dryden termed it "the most successful research airplane in history." 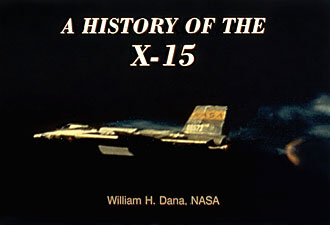 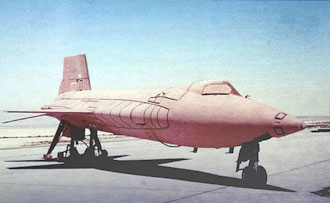 
(SLIDE 2) The X-15's beginnings were in 1952. It was the year of the first flight of the YB-52, and the aeronautical community was struggling to advance aircraft speeds from Mach 1.5 to Mach 2. Men of vision, however, already were looking to the higher speeds and altitudes that would eventually take us to orbital flight. For it was that year that the NACA Committee on Aeronautics recommended an increase in research dealing with flight to speeds of Mach 10 or 12 and to altitudes from 12 to 50 miles.

The ultimate winner of the contract was North American Aviation, and the result was the X-15. The X-15 program called for the production of three aircraft designed for a speed of Mach 6.6 and an altitude of 250,000 feet. The Mach 6.6 represented the maximum speed that state of the art structures could support; the 250,000 foot altitude was an arbitrary design point which would force adequate attention to exo-atmospheric control and to reentry techniques.

The X-15 was 50 feet long and had a wingspan of 22 feet. It (SLIDE 3) weighed 33,000 pounds at launch and 15,000 pounds empty. Its flight control surfaces were hydraulically actuated and included all-moveable elevators, all-moveable upper and lower rudders (the lower rudder extended below the landing gear; it had to be jettisoned before landing), speed brakes on the aft end of the fixed portion of the vertical fins, and landing flaps on the trailing edge of the wing. There were no ailerons; roll control was achieved by differential deflection of the horizontal tail.

All three X-15's were delivered with simple rate-feedback damping in all axes. The number three X-15, however, was extensively damaged during a ground engine run before it ever flew; when it was rebuilt it was fitted with a self-adaptive flight control system which included command augmentation, self-adaptive damper gains, several autopilot modes, and blended aerodynamic and ballistic controls. 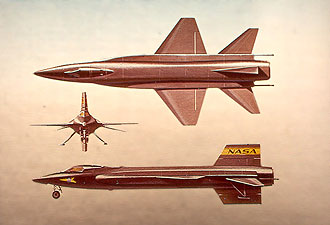 X-15 Illustration of the top, side and end view (Slide 3) 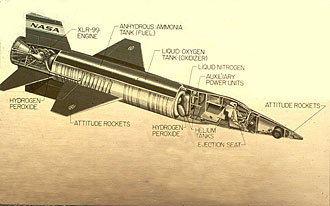 The X-15 was designed as a "hot structure," that is, the structure served as a heat sink for aerodynamic heat loads. These loads could have been reduced by insulation or by cooling, but the hot structure offered a more attractive concept in terms of knowledge to be gained in the areas of aerodynamic heating and elastic behavior. The structural material was Inconel X, a nickel-chromium alloy slightly heavier than steel, selected for its load-carrying capability at high temperature. The exterior surface of the aircraft was painted black for better re-radiation of aerodynamic heat loads.

(SLIDE 4)The X-15 engine was an XLR-99 single chamber rocket. It produced 60,000 pounds of thrust and it burned 18,000 pounds of liquid oxygen and anhydrous ammonia in 85 seconds. The propellants were fed by a steam driven turbopump; the source of the steam was hydrogen peroxide decomposed by passing through a silver screen catalyst bed.