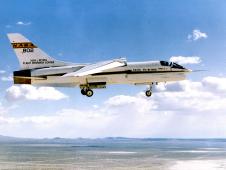 Skies around the world are being filled with a new generation of military and commercial aircraft, and the majority of them are beneficiaries of one of the most significant and successful research programs conducted by NASA's Dryden Flight Research Center -- the Digital Fly-By-Wire flight control system.

The Dryden DFBW program has changed the way commercial and military aircraft are designed and flown. Aircraft with fly-by-wire systems are safer, more reliable, easier to fly, more maneuverable and fuel efficient, and maintenance costs are reduced.

Flight control systems link pilots in their cockpits with moveable control surfaces out on the wings and tails. These control surfaces give aircraft directional movement to climb, bank, turn, and descend. Since the beginning of controlled flight in the early 1900s, wires, cables, bellcranks, and pushrods were the traditional means of connecting the control surfaces to the control sticks and rudder pedals in the cockpits. As aircraft grew in weight and size, hydraulic mechanisms were added as boosters because more power was needed to move the controls.

The Digital Fly-By-Wire (DFBW) program, flown from 1972 to 1985, proved that an electronic flight control system, teamed with a digital computer, could successfully replace mechanical control systems. Electric wires are the linkage between the cockpit and control surfaces on a DFBW aircraft. Command signals from the cockpit are processed by the digital flight control computer and transmitted to actuators that move control surfaces correspondingly.

Nearly every new military and commercial aircraft in the world, from high performance fighters to jetliners circling the world -- and NASA's fleet of space shuttles -- incorporate DFBW flight control systems.

The heart of the DFBW system tested by NASA was a digital guidance and navigation computer, and an inertial sensing unit, both developed for the Apollo moon-landing program. Flight control systems on Apollo command and lunar landing modules were fly-by-wire and this rugged computer, with its proven reliability and broad programming capabilities, made it an excellent unit to help demonstrate DFBW on an aircraft for the first time. The test aircraft was an F-8C Crusader obtained from the U.S. Navy and modified for the program. 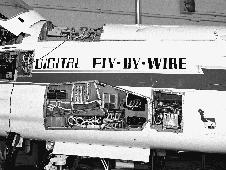 The Apollo hardware jammed into the F-8C. The computer is partially visible in the avionics bay at the top of the fuselage behind the cockpit. Note the display and keyboard unit in the gun bay. To carry the computers and other equipment, the F-8 DFBW team removed the aircraft's guns and ammunition boxes. The Design Benefits of DFBW

One of the most far-reaching contributions to come out of the DFBW program has been the concept's impact in aircraft design, from total configuration to internal engineering features.

Until augmented flight control systems were introduced, aircraft were designed to be naturally stable. But naturally stable aircraft do not possess the agility demanded of modern military aircraft and even some commercial designs.

DFBW harnesses the speed and processing capabilities of digital computers to compensate for inherent instability. Computer software containing complex control laws is tailored to the aircraft's design and flight characteristics. The computerized flight control system silently and swiftly senses deviations from the desired flight path and automatically compensates -- as many as 40 commands a second -- to keep the aircraft in a stable environment. When the pilot wants to move the aircraft, control commands from the stick briefly "unlock" the artificial stability and the aircraft moves to a new course.

This concept of controlled or artificial stability gives aircraft designers' greater freedom to select designs, configurations, and performance levels that had not been possible before.

Departures from traditional military designs are evident in two of the first U.S. military aircraft to be developed with DFBW, the F-18 used by the U.S. Navy and Marine Corps and the Air Force F-16. Both designs have evolved into extremely versatile, agile, and successful aircraft.

The F-117 fighter, B-2 bomber, the F-22 advanced tactical fighter and the F-35 Joint Strike Fighter are the latest examples of even more evolutionary designs of U.S. military aircraft to utilize DFBW. Each aircraft is inherently unstable, but they all display individual design, maneuverability, and flight characteristics that could not have been achieved without the benefits of DFBW.

DFBW systems are ideal on military aircraft because the electrical circuits are much less vulnerable to battle damage and they can be repaired easier and faster.

From 1979 to 1983, a pair of remotely piloted vehicles featuring DFBW flight control systems was flown to study high-performance fighter design and construction technologies. The program was called HiMAT -- Highly Maneuverable Aircraft Technology. The DFBW systems in the two sub-scale research vehicles were instrumental in the program's success and helped influence development of future military, commercial, and business aircraft.

Many new-generation transport aircraft have been developed with DFBW flight control systems. Among them are the Boeing MD-11 and 777 jetliners, the Boeing C-17 military transport, and the A-300 series of passenger and cargo carriers built by Airbus Industries in Europe.

Passengers on any one of these aircraft may notice an unseen benefit of DFBW -- the ride. Computerized flight control systems are greatly advanced beyond autopilot systems used on air carriers in past decades. They sense turbulence-induced deviations and make control corrections before they are hardly noticed by flight crews and passengers. This makes the ride much smoother than one controlled by human hands alone, or augmented by autopilots of yesterday.

The capability of DFBW systems to maintain constant flight speeds and altitudes over long distances is another way of increasing fuel efficiency. The system acts much like cruise controls on automobiles: less fuel is needed if throttles are untouched over long distances.

A fly-by-wire system is more reliable than a mechanical system because of fewer parts to break or malfunction. DFBW is also easier to install, which reduces assembly time and costs. DFBW maintenance costs are lower because they are easier to maintain and troubleshoot, and need fewer replacement parts.

Using thin electrical wires for a flight control system takes up less space inside fuselages, wings, and tail components. This gives designers several options. Wings and tail components can be designed thinner to help increase speed and make them aerodynamically cleaner, and also to reduce weight. Space once used by mechanical linkages can also be used to increase fuel capacities to give the aircraft greater range or payload.

By providing constant integrated control corrections in all axis of pitch, yaw, and roll, DFBW lets designers eliminate tail components altogether as a way of improving aerodynamics, reducing weight, and creating an aircraft that is developed to be mission-specific. An example of this configuration is the Air Force B-2 bomber, a total wing platform that was developed with a minimal radar signature to evade detection.

Each of NASA's space shuttle's have a DFBW flight control system that operates the orbiter flight control surfaces -- inboard and outboard elevons, speed brake and rudder assembly, and the body flap -- during the reentry and landing phases of the missions.

The same flight control system also integrates data from guidance and navigation components on the orbiters to guide them through the other phases of a shuttle mission -- launch, ascent, orbit, and deorbit -- by operating the reaction control system, which uses pressurized gas to control pitch, yaw, and roll in space.

The DFBW system used on the Space Shuttles was flight tested on the prototype orbiter Enterprise during the Approach and Landing Test (ALT) program conducted at Dryden in 1977. Enterprise was carried into the air atop a NASA 747 shuttle carrier aircraft and released to test the glide and landing characteristics of the orbiter. The landing tests simulated the final phase of powerless flight from a space mission and evaluated the handling qualities of the shuttle and its DFBW system.

During the fifth and final ALT flight, a pilot-induced oscillation (PIO) developed just as the vehicle settled onto the Edwards AFB runway, causing the vehicle to roll to the left slightly and bounce twice before beginning its final rollout. The problem was duplicated with the DFBW F-8 test aircraft and a PIO suppression filter for the flight control computer software was developed and tested at Dryden to eliminate the potentially dangerous problem on future flights. 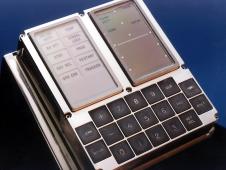 During the lifetime of the DFBW program, several other important electronic concepts were tested and evaluated on the NASA F-8 aircraft.

The Air Force's F-16 fighter features a side-stick controller mounted in an arm-level console next to the pilot's seat. During the aircraft's development the side-stick concept was evaluated in the DFBW F-8 to determine if the location was acceptable to pilots. Test flights showed it was easier to use during high G-force maneuvering than a controller in the conventional center location.

A series of successful tests of a software backup system, when the aircraft had been modified to fly with three computers, demonstrated a way to survive common software faults, which could cause all units to fail. Called the Resident Backup System (REBUS), the concept has been used on other experiment aircraft and in production systems.

A team effort with the British Royal Aircraft Establishment used the F-8 to produce ground-based software for researchers investigating flight controls in high-risk flight environments. The software allows pilots, during emergencies, to disengage ground control software and use an on-board backup system.

The F-8 was used as the testbed for the first in-flight evaluations of an angle-of-attack limiter and maneuver-driven flaps, features now found on most all-military and commercial aircraft.

The final flight experiment during the DFBW program was development of a concept called Analytic Redundancy Management, in which dynamic and kinematic relations between dissimilar sensors and measurements are used to detect and isolate sensor failures.

Aeronautical engineers in the 1960s began looking hard at the idea of electronic flight control systems in aircraft. The aviation industry had already used the fundamentals of fly-by-wire in autopilots and in World War II bombsights, but these systems just supplemented primary mechanical flight control systems.

Dryden had already developed the Lunar Landing Research Vehicle (LLRV), with its analog fly-by-wire system, to help Apollo astronauts train for their moon landings. By the end of the decade, the Apollo program was sending astronauts on roundtrips to the moon in space capsules, which had digital computers and fly-by-wire control systems to operate thrusters.

Engineers were now ready to apply these principles to an aircraft's flight control system.

In late 1969, after the proposal to develop a DFBW research aircraft arrived at NASA headquarters, it picked up the full support of Neil Armstrong, who had been assigned to NASA's Office of Aeronautical Research and Technology after his history-making Apollo 11 mission. A former X-15 research pilot at Dryden, Armstrong helped obtain the F-8 from the Navy and also the digital Apollo computer and inertial sensing unit that became the core units of the DFBW system.

The program was carried out in two phases. Phase 1 validated the basic concept of DFBW and demonstrated to the aerospace industry that it could be applied safely to most any aircraft. A backup fly-by-wire system had been installed in case the Apollo computer failed, but it never had to be used. Phase 2 was a joint effort involving the NASA Langley Research Center in which the original Apollo computer unit in the F-8 was replaced by a triple-redundant digital system.

The program ended on Apr. 2, 1985, with a total of 210 flights. The aircraft is on public display at the Dryden Flight Research Center.

The aircraft's engine was a Pratt and Whitney J-57 turbojet that produced 13,750 lbs of thrust.

LTV received the Collier Trophy for the design and development of the F-8.