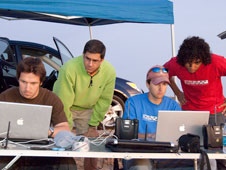 ”This is an outstanding group of students that designed, built, and test flew an autonomous airplane in two and a half months from start to finish,” said Professor Juan J. Alonso, an associate professor in the Department of Aeronautics and Astronautics at Stanford. “Our NASA colleagues were simply wonderful; their willingness to host the students, share their knowledge and expertise, and provide helpful advice from real flight testing is something that none of us will forget," Alonso said.

Alonso formerly served as Director of NASA's Fundamental Aeronautics Program at NASA Headquarters in Washington from 2006-2008. 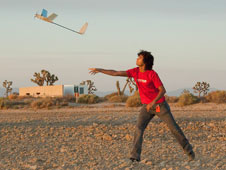 Zouhair Mahboubi of Stanford University launches the team's battery-powered AA241X UAV on a record altitude flight attempt just after dawn. (NASA photo / Tom Tschida) The team-built balsa and foam aircraft, with a nearly four-foot wingspan and weighing less than a pound, was powered by a small battery-driven electric motor up to altitude, then glided to landing without any human intervention.

An observer from the National Aeronautic Association was on-hand to collect data in order to certify the record-establishing attempt, a requirement for the verification of aeronautical records in the United States.

"This was a great opportunity for Dryden to host a top rate university like Stanford," said Starla Carroll, NASA Dryden's project manager for the effort.

"Regardless of where these graduate students work after graduation, be it industry, academia or even NASA, they know first hand that Dryden is the place to go for aeronautical flight tests," said Carroll. "The Stanford team considered their endeavors here a terrific learning experience and a successful flight day, which was topped off with the timely opportunity to see space shuttle Discovery land here at Edwards."