Neil Armstrong: 'We have lost a humble giant, but his legacy is forever' 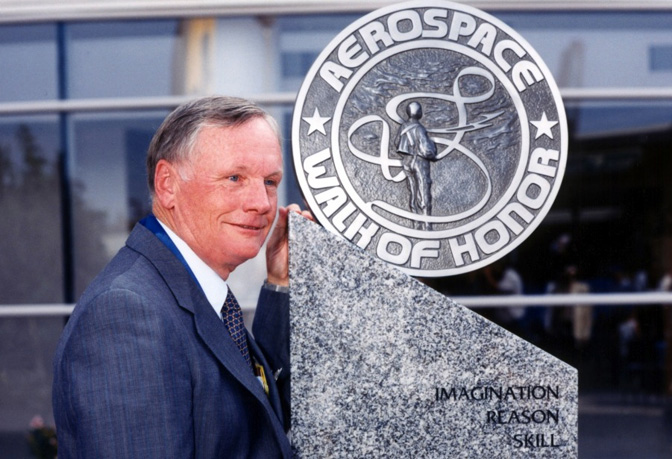 Armstrong was honored in 1991 by the City of Lancaster, Calif., with a monument about his achievements as a pilot and astronaut in the Aerospace Walk of Honor. (NASA Dryden photo)

Neil Armstrong, the first man to walk on the moon during the 1969 Apollo 11 mission, has died, following complications resulting from cardiovascular procedures. He was 82.

Armstrong's words "That is one small step for (a) man, one giant leap for mankind," spoken on July 20, 1969, as he became the first person ever to step onto another planetary body, instantly became a part of history. 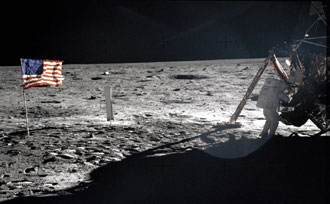 One of the few photos that show Armstrong during the Apollo 11 moonwalk. (NASA photo)
+ View Larger Photo Those few words from the Sea of Tranquillity were the climactic fulfillment of the efforts and hopes of millions of people and the expenditure of billions of dollars. A plaque on one of the lander's legs that concluded "We came in peace for all mankind," further emphasized that Armstrong and fellow astronaut Edwin "Buzz" Aldrin were there as representatives of all humans.

In a 2001 oral history interview, Armstrong credited those behind the scenes for the mission's success: "when you have hundreds of thousands of people all doing their job a little better than they have to, you get an improvement in performance. And that's the only reason we could have pulled this whole thing off." › View Full Oral History (907 KB PDF)

Armstrong is survived by his wife, two sons, a stepson, a stepdaughter, 10 grandchildren, and a brother and sister.

"Neil Armstrong was a hero not just of his time, but of all time," President Barack Obama said via Twitter. "Thank you, Neil, for showing us the power of one small step." › Read the full statement from the President.

"Neil Armstrong was also a reluctant American hero who always believed he was just doing his job. He served his Nation proudly, as a navy fighter pilot, test pilot, and astronaut. He also found success back home in his native Ohio in business and academia, and became a community leader in Cincinnati.

"While we mourn the loss of a very good man, we also celebrate his remarkable life and hope that it serves as an example to young people around the world to work hard to make their dreams come true, to be willing to explore and push the limits, and to selflessly serve a cause greater than themselves." › Read Full Family Statement

The family will be providing further updates at www.neilarmstronginfo.com .

"As long as there are history books, Neil Armstrong will be included in them, remembered for taking humankind's first small step on a world beyond our own," said NASA Administrator Charles Bolden. 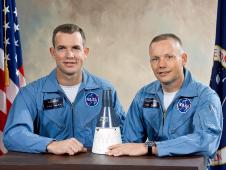 Armstrong, right, joined astronaut Dave Scott on the Gemini VIII mission in March of 1966. (NASA photo)
+ View Larger Photo
“Besides being one of America’s greatest explorers," Bolden added, "Neil carried himself with a grace and humility that was an example to us all." › See Administrator Bolden's Full Statement

Apollo 11 lunar module pilot and fellow moonwalker Buzz Aldrin on Armstrong's passing: “I am very saddened to learn of the passing of Neil Armstrong today. Neil and I trained together as technical partners but were also good friends who will always be connected through our participation in the Apollo 11 mission. Whenever I look at the moon it reminds me of the moment over four decades ago when I realized that even though we were farther away from earth than two humans had ever been, we were not alone."

Apollo 11 command module pilot Michael Collins said simply, “He was the best, and I will miss him terribly.”

As news of Armstrong's death became widely known, many NASA officials offered their thoughts on the agency's best-known representative:

"The passing of Neil Armstrong has shocked all of us at the Johnson Space Center," said Center Director Michael Coats. The whole world knew Neil as the first man to step foot on the Moon, but to us he was a co-worker, a friend, and an outstanding spokesman for the Human Space Program. His quiet confidence and ability to perform under pressure set an example for all subsequent astronauts. Our role model will be missed."

"Neil Armstrong was a very personal inspiration to all of us within the astronaut office," said Bob Behnken, Chief of NASA's Astronaut Office. "His historic step onto the Moon's surface was the foundation for many of our personal dreams to become astronauts. The only thing that outshone his accomplishments was his humility about those accomplishments. We will miss him as a friend, mentor, explorer and ambassador for the American spirit of ingenuity."

Former Ohio senator John Glenn, who made America's first orbital spaceflight in 1962, expressed his admiration for Armstrong upon hearing of his death.

"When I think of Neil, I think of someone who for our country was dedicated enough to dare greatly," said Glenn.

Armstrong's single sentence, though it was focused above the national divisions and quarrels of Earth, still signified unquestionably the U.S. victory in the desperate space race with the Soviet Union.

Neil A. Armstrong was born Aug. 5, 1930, in Wapakoneta, Ohio. He earned an aeronautical engineering degree from Purdue University and a master's in aerospace engineering from the University of Southern California.

In 1955 he joined the National Advisory Committee for Aeronautics (NACA), NASA's predecessor, as a research pilot at Lewis Laboratory in Cleveland. 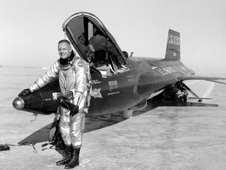 Before becoming an astronaut, Armstrong flew the rocket-powered X-15 as a research test pilot at the NACA High-Speed Flight Station, now NASA's Dryden Flight Research Center. (NASA photo) + View Larger Photo Armstrong later transferred to NACA's High Speed Flight Research Station at Edwards AFB, Calif., now NASA's Dryden Flight Research Center. As a research project test pilot over the course of seven years at the center from 1955 through 1962, he was in the forefront of the development of many high-speed aircraft. He was one of only 12 pilots to fly the hypersonic X-15 as well as the first of 12 men to later walk on the moon. In all, he flew more than 200 different types of aircraft.

Long-time NASA Dryden engineer Glenn Bever recalled that Armstrong last visited Dryden in 2011 as part of the National Research Council (NRC) committee that reviewed the flight content of our NASA Aeronautics portfolio. He flew the X-48 simulator while touring Dryden during that visit.

"His love of flying never diminished, and I believe he was happier discussing flying as ‘one of the boys’ than he was in his role of the icon that first walked on the moon," Bever reflected. "We have lost a humble giant, but his legacy is forever."

Armstrong was selected as an astronaut in 1962.

His first space flight was Gemini 8, which he commanded. He was the first civilian to fly a U.S. spacecraft. With fellow astronaut David R. Scott, Armstrong performed the first docking in space, with an Agena target satellite.

Less than an hour later their spacecraft began an unplanned rolling motion. After undocking, it increased to one revolution per second. One of the Gemini's 16 thrusters had stuck open because of an electrical short circuit.

Armstrong used re-entry thrusters to control the capsule, and after a 30-minute struggle, it was stabilized. Flight rules required a return to Earth after use of the re-entry thrusters, so the crewmembers fired retrorockets that sent Gemini 8 to a contingency landing zone in the Western Pacific. The eventful flight on March 16, 1966, had taken just over 10 hours, 41 minutes.

Apollo 11 lifted off on July 16, 1969, with Armstrong, Aldrin and Mike Collins aboard. Collins remained in lunar orbit in the command module while Armstrong and Aldrin descended in the lunar module they had named Eagle to their historic landing on the moon's surface.

"Houston, Tranquillity Base here. The Eagle has landed," Armstrong said, telling a tense and waiting Earth that men had finally reached the lunar surface.

He and Aldrin spent about two hours exploring, gathering more than 50 pounds of moon rocks and setting up three scientific experiments. The next day, after 21 hours and 37 minutes on the moon, they fired Eagle's engine to begin the return to Collins and the command module.

The crew returned to Earth, landing near the USS Hornet in the Pacific after a mission of just over eight days. President Richard M. Nixon was on the aircraft carrier's deck to welcome them.

"This is the greatest week in the history of the world since the creation," Nixon told the three.

After 16 days in quarantine to protect Earth from any returned moon germs, the crew went on U.S. and international tours. Millions greeted them as heroes.

Armstrong later served as deputy associate administrator for aeronautics in the Office of Advanced Research and technology at NASA Headquarters. He resigned from the space agency in 1971. As a professor at the University of Cincinnati from 1971 to 1979, he was involved in both teaching and research.

He later went into the business world. Among other positions, he served for 10 years as chairman of Computing Technologies for Aviation Inc. of Charlottesville, Va. and later as chairman of AIL Systems Inc., an electronic systems company based in Deer Park, N.Y. 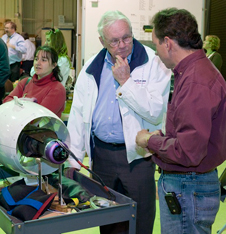 He was a member of the National Academy of Engineering. He served as a member of the National Commission on Space in 1985 and 1986, and in 1985 was vice chairman of the Presidential Commission on the Space Shuttle Challenger Accident. He also was chairman of the Presidential Advisory Committee for the Peace Corps from 1971 to 1973.

Armstrong's family will hold a private, closed memorial service for Neil Armstrong on Friday, Aug. 31, in Cincinnati. Planning is under way for a public memorial observance at a later date.

Additional information about Armstrong is available on the Web at: Neil Armstrong's Dryden Pilot Biography, http://www.nasa.gov and at http://www.neilarmstronginfo.com

More photos of Neil Armstrong's life as a NASA astronaut, research pilot and American icon can be found at: http://www.nasa.gov/topics/people/galleries/armstrong.html
Find this article at:http://www.nasa.gov/centers/dryden/Features/neil_armstrong_passing.html