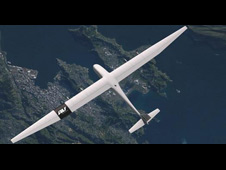 NASA Dryden's current work for the program centers on structural loads testing of a test article wing of a Global Observer-1. The test will be conducted in Dryden's Flight Loads Laboratory. Dryden is providing expertise for the loads testing, ground vibration (modal survey) testing and structural mode interaction testing. In addition, the center is providing the test fixture design, test planning, technical and design reviews, range safety support and feedback to DoD and AeroVironment representatives.

Global Observer is being developed to provide stratospheric global persistence with no latitude restrictions. Endurance of the liquid-hydrogen powered aircraft is expected to be up to one week, carrying a payload of up 400 lbs. for the initial aircraft. The aircraft is optimized to operate at an altitude between 55,000 and 65,000 feet.

In addition to defense and homeland security missions, civil and commercial applications may include communications relay and remote sensing payloads, hurricane/storm tracking and other weather monitoring, and aerial imaging and mapping for commercial and environmental monitoring.