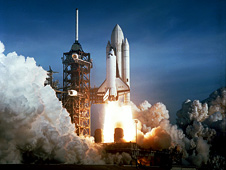 Often called 'the boldest test flight in history,' Space Shuttle Columbia launches on mission STS-1 on April 12, 1981. (NASA/KSC) On April 12, 1981, after more than a decade of development and billions of dollars, space shuttle Columbia roared aloft from the Kennedy Space Center in Florida on STS-1, the first orbital test mission of the Space Shuttle program. Fifty-four hours later on April 14, shuttle commander John Young and pilot Robert Crippen brought Columbia back from space to a perfect landing on the bed of Rogers Dry Lake at Edwards Air Force Base in Southern California's high desert, before an estimated 320,000 persons who gathered at Edwards to witness the historic first shuttle landing.

On April 15, 2011, those heady days 30 years earlier were recalled by STS-1 astronaut Robert Crippen at a colloquium at NASA's Dryden Flight Research Center at Edwards during the afternoon and at an evening program in nearby Lancaster, Calif.

The retired U.S. Navy captain explained that early on, there was debate about leaving the crew off of the first flight in favor of an automated mission. However, upon Young's and other astronauts' urging, officials agreed that the shuttle system’s complexity required an onboard crew capable of reacting to an emergency, he said.

Although there were ejection seats on the first four shuttle flights – acquired from the high-altitude, Mach 3-plus SR-71 – they were “primarily a placebo,” Crippen said.

“There was a ton of flame from the solid rocket boosters. If you ejected, you would have to go through that and you would get very toasty,” he added. 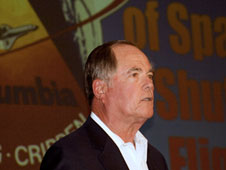 STS-1 astronaut Bob Crippen shares his recollections of the first space shuttle mission 30 years ago at a NASA Dryden colloquium on April 15, 2011. (NASA Photo / Jay Levine) On launch day, he said only after the clock started ticking down under one minute did he believe the STS-1 mission would really begin. The computers had not been communicating with each other a few days earlier, and he was expecting a scrub.

But all systems were go and it was “quite a ride” as the shuttle stack accelerated to orbital velocity of 17,500 miles per hour. The solid rocket boosters shook Columbia, a feeling he likened to “driving my pickup fast over a washboard country road.”

The Columbia was initially “well above our trajectory,“ he said, and he watched as the solid rocket boosters jettisoned from the orbiter and passed in front of the vehicle’s windshield. Then the acceleration began to tail off and it was quiet.

“I thought we had lost the main engines,” he said. Everything was fine, however, and the mission was on its way.

Once Columbia was in orbit, Crippen released himself from the confines of his seat and began to make his way around the shuttle. “It’s topsy-turvy without gravity,” he said. “‘Up’ was whatever direction I was pointed.”

He floated over to the control panel facing the payload bay doors to open them, standard practice when an orbiter gets to space as a means of releasing heat from the radiators. Once the doors opened, he said, “John, look at that,” as he pointed to some areas on the Orbital Maneuvering System pods where there were dozens of missing thermal protection tiles. 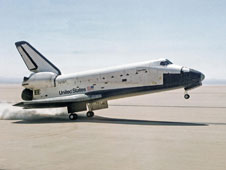 Space Shuttle Columbia touches down on lakebed runway 23 at Edwards Air Force Base, Calif., to conclude STS-1, the first orbital shuttle mission on April 14, 1981. (NASA Photo) The missing tiles were not essential, but the two men were concerned about what might be missing on the hottest areas of Columbia’s underside. The two astronauts were fairly confident they would land safely.

Two days later, the OMS rockets were fired for the de-orbit burn halfway around the world from the landing site; hot plasma from the shuttle's re-entry into the atmosphere glowed pink as it streamed past the flight deck windows, and it felt like “flying through a neon tube,” he said.

As Columbia approached the landing site at Edwards, Crippen said he could see the huge mass of vehicles and people gathered on the east shore of the dry lakebed to welcome them back to Earth.

As the final flight in the shuttle program nears, much is being said about the achievements of the shuttle program and the inspiration it created. However, it’s the crew of two – Young and Crippen – who completed what is considered one of the boldest test flights in history that ushered in a new era in human space flight.