Tweeting, posting, clicking and texting were the order of the day for fans of NASA's social media accounts during the NASA Social held in connection with the stopover of space shuttle Endeavour atop NASA's Shuttle Carrier Aircraft at NASA's Dryden Flight Research Center Sept. 19-21. (NASA / Tom Tschida) + View Larger Photo

It's hard to stage an event for millions of your closest friends. For that reason, NASA Socials are designed to give participants a behind-the-scenes look at how the agency works to share with their followers and reach audiences that ordinarily would not have the same access. 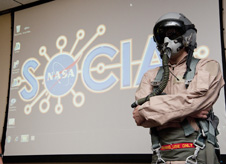 NASA Social attendee Andrew Rechenberg of Cincinnati, Ohio, was ready to do some stick-and-rudder flying after getting garbed in a partial pressure suit, helmet and oxygen mask worn by NASA pilots when flying high-performance aircraft. (NASA / Tom Tschida)
› View Larger Image For 38 attendees of the "NASA Social" at the Dryden Flight Research Center Sept. 19-21, the sense of awe and wonder of the space shuttle program was experienced first hand. Social media fans shared rare access to the landing of Endeavour atop its host 747 on Sept. 20 and the departure of the final leg of its ferry flight Sept. 21 over key California landmarks before landing at the Los Angeles International Airport.

NASA Social participants had the opportunity to learn about Dryden's historic role in the shuttle program. For example, the Approach and Landing Tests at Dryden with the shuttle prototype Enterprise in 1977 validated that the shuttle could land unpowered. All but one of the early shuttle landings were at Edwards Air Force Base and the shuttles returned from space to a California welcome 54 times during the operational shuttle program.

More than 2,300 social media followers who have accounts on Twitter, Facebook and Google+, signed up for one of the limited number of slots at the Dryden event.

NASA social media lead John Yembrick, moderator of the event, said attendees were given a number of unique opportunities to learn about NASA. 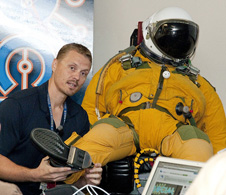 NASA Dryden life support technician John Takas demonstrates how a pilot's boots are clamped onto a full pressure suit used by pilots of high-altitude aircraft for attendees of the NASA Social at the Dryden Flight Research Center. (NASA / Tom Tschida)
› View Larger Image "The level of enthusiasm of the participants shows the benefits of doing these events in person with on-line engagement. We have had 30 NASA Socials and they are all unique, but this was one of the finest we have hosted," Yembrick said. "These events make NASA more accessible and communicates our story to a more general audience that perhaps has not heard it before," he added.

Social media followers came from all over the United States. They included educators, social media strategists and videographers and numerous other vocations /avocations.

The social had meaning for Kaci Heins, a teacher from Flagstaff, Ariz.

"It (Endeavour) was the first shuttle I saw up close. It was very emotional and I teared up," she said.

Participants such as Andy Rechenberg appreciated the special access.

"I know a lot about NASA, but I didn't know how many aircraft and space projects flew here," said Rechenberg, who hails from Cincinnati, Ohio. "I was speechless when we were able to tour the NASA 747 with Endeavour on top. It was off the charts to be inside the SCA. You couldn't ask for more. Expectations started high and stayed there," he said.

"It was an enthusiastic group," she said. "When the social media event was extended to three days, attendees were happy that they had an extra ‘bonus' day to learn about Dryden. 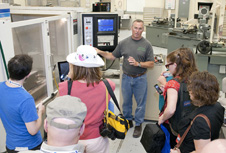 NASA Dryden senior machinist Keith Day describes the functions of a vertical milling center in the center's experimental fabrication shop to followers of NASA'ssocial media accounts during the NASA Social at the Dryden Flight Research Center. (NASA / Tom Tschida)
› View Larger Image "It is important to present these opportunities to social media to get NASA's messages out to a wide range of people," Mattox added. "Some participants have as many as 43,000 followers and there is a multiplier factor for people who receive the messages and send them to their followers."

"We also had an opportunity to show participants what's next for NASA," said Mattox. "Yes, it's sad the shuttle program has come to an end, but NASA still is in the business of space and aeronautics research."

Cindy Chin, a management consultant from New York City, said she was happy to be a part of history.

"The space shuttle means so much to everyone. Its appeal reaches across generations and excites our inner astronaut," she said.

Closer to home, Cariann Higginbatham of Anaheim, Calif., said she likes seeing behind the curtains at NASA.

"We were shown the backstage and how NASA works," Higginbatham commented. "It was special because we saw what other people don't see. NASA is not faceless. We were able to see the other side of NASA – its people," she said. Jay Levine, editor, The X-Press
NASA Dryden Flight Research Center
› Back To Top