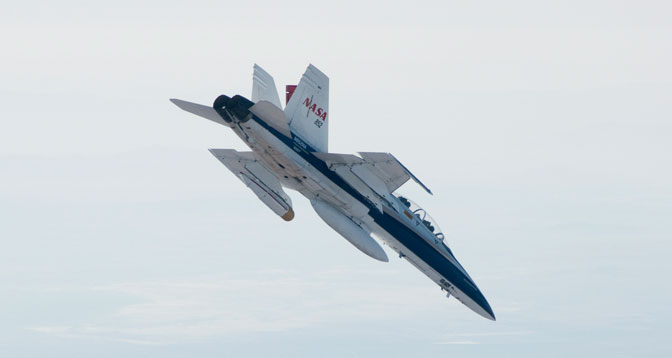 Southern California’s high desert has been a stand-in for Mars for NASA technology testing many times over the years. So it was again as NASA’s Dryden Flight Research Center and Jet Propulsion Laboratory flight-tested the next Mars rover’s landing radar, using an F/A-18 aircraft.

The Mars Science Laboratory, or MSL mission, is following up the grand success of the twin Mars Exploration Rovers, Spirit and Opportunity, which tirelessly explored Mars for the last seven years. The MSL mission is part of NASA's Mars Exploration Program, a long-term robotic exploration effort of the red planet. The mission is managed by JPL in Pasadena, Calif. 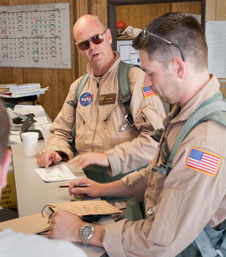 NASA research pilot Nils Larson and flight engineer Mike Holtz review the flight test cards before a research flight in a NASA F/A-18. (NASA / Tom Tschida)
› View Larger Image NASA Dryden’s F/A-18 carried a Quick Test Experimental Pod, or QTEP, that housed the MSL test radar, attached underneath the aircraft’s left wing. The flight profile was designed to have the F/A-18 climb to 40,000 feet, then make a series of subsonic, stair-step dives over Rogers Dry Lake at angles of 40 to 90 degrees in order to simulate what the MSL’s radar will see during entry into the Martian atmosphere. The F/A-18 pulled out of each dive at 5,000 feet.

“Not only has the working relationship between Dryden and JPL been exemplary, but we're proving the viability of suborbital flight testing of critical space hardware,” says Mike Holtz, Dryden’s MSL project lead and F/A-18 backseat flight test engineer. “This has been a unique opportunity to test equipment in a representative environment prior to the space flight hardware blasting off to Mars,” Holtz says.

Data collected by these flights will be used to finesse the MSL’s landing radar software to help ensure that it calibrated as accurately as possible.

The current MSL landing radar flight tests with the F/A-18, which concluded June 20, focused on the on-chute acquisition portion of the MSL’s entry into the Martian atmosphere, when the spacecraft is suspended from its parachute. Last June, NASA Dryden supported MSL radar testing aboard a helicopter at Dryden, which focused on the powered descent portion of the MSL flight profile.

Overall, the flight envelope for MSL radar operations is much larger than it was for the Mars Exploration Rovers and Phoenix Lander, due to the MSL radar operating at higher altitudes than either of its predecessors. Those previous Mars missions tested the landing radar with only a helicopter, but testing with both the helicopter and the F/A-18 is required this time around.

The test results will be analyzed to verify the radar performs as expected throughout its flight envelope. If any unexpected performance is uncovered, the JPL team has the ability to modify the parameters and/or software any time leading up to the rover’s scheduled landing in August 2012. 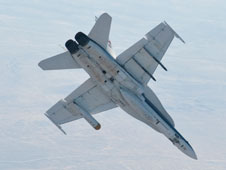 Dryden support during the current flight phase of the project included precision flying of the center’s F/A-18 aircraft. The MSL radar was controlled during flight by Holtz aboard the aircraft. Dryden's mission control rooms have been fully utilized as well, providing monitoring of on-board instrumentation and downlink of in-flight MSL radar operation telemetry and video from chase aircraft and ground-based long-range cameras.

“This cooperative relationship between JPL and Dryden serves as a fine example of inter-center relationships,” Holtz said. “Mutual respect and dedication to the project has fostered a productive work environment and has allowed us to work through some challenging problems and set-backs.”

The MSL rover, named Curiosity, is scheduled for shipment from JPL to NASA’s Kennedy Space Center in Florida in late June where it will be readied for a launch window between Nov. 25 and Dec. 18, 2011. The rover should arrive at Mars in August 2012. After Curiosity lands on Mars, researchers will use the rover's 10 science instruments during the following two years to investigate whether the landing area has ever offered environmental conditions favorable for microbial life.