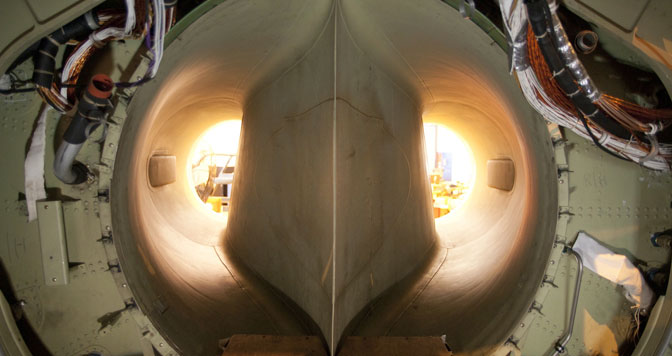 If an F-118 jet engine had eyes, this is what it would see as the twin air inlets on each side of the fuselage of a NASA ER-2 converge at the engine's front fan. › View Larger Image

NASA's ER-2 Earth Resources aircraft No. 809 hasn't taken to the air since June. The aircraft sits in the vast Dryden Aircraft Operations Facility hangar in Palmdale, Calif., literally in pieces, a shell of its former high-flying self.


The aircraft, which has amassed 4,633 flight hours since it was built in 1989, is undergoing what is called modified periodic maintenance. A team of Dryden aircraft mechanics and technicians has removed the tail, the nose, the wings' upper skins and placed the plane on jacks – all to ensure the structural soundness and airworthiness of the 22-year old airframe. The inspection and repair work is taking place in-house by NASA and Computer Sciences Corp. personnel.

NASA operates two ER-2s that undergo routine inspections based on number of flight hours flown. The inspections vary in degrees of complexity. It has been about 10 years since ER-2 809 has been inspected in this amount of detail. Technicians are looking for corrosion, checking for leaks in the fuel tanks and removing wiring from previous science projects that is no longer needed. In addition, some older wiring is being replaced by Teflon-coated wiring to ensure flight viability long into the future.

A number of improvements are planned for the airframe and this inspection offers the opportunity to incorporate upgrades as simple as changing a screw to new type. More complex activities include cutting and removing pieces of metal to be replaced by new, stronger brackets.


Although the wings were not removed, the wing root where the wings attach to the fuselage is being thoroughly inspected. The upper halves of the wing skins were removed for examination of the fuel lines and tanks and replacement of sealant.

Dryden ER-2 pilots are looking forward to putting ER-2 809 through a functional flight check next spring. Scientists will again begin loading the aircraft with instruments that are carried aboard to altitudes of up to 70,000 feet, so high that the pilot can see the curvature of the Earth, for a variety of environmental science and satellite instrument verification missions.

The ER-2s are two of a suite of NASA Airborne Science Program research aircraft operated by NASA Dryden. The other aircraft include a DC-8 flying laboratory, a Gulfstream III and two remotely operated Global Hawks.