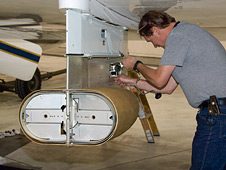 During the missions, the ER-2 flies in various directions over the Pacific Ocean on routine collection flights. When the aircraft reaches an altitude of 65,000 feet, the pilot activates the collectors' doors so that the pads are exposed. As the aircraft begins its descent, the pilot closes the doors, sealing the pads.

The first three missions were flown on April 27 and 29 and May 9; the final flight was tentatively slated for May 14 or 15, atmospheric conditions permitting.

Dr. Mike Zolensky, a space scientist at NASA Johnson, has coordinated the flights of these devices on the ER-2s for more than 20 years. One of the more interesting collections was in 2003 when the ER-2 flew through a dust stream left by comet Grigg-Skjellerup. 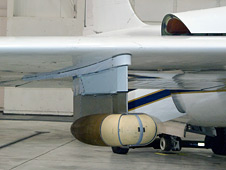 This Large Area Collector cosmic dust sensor is carried under the wing of NASA’s ER-2 high-altitude aircraft. When the aircraft reaches 65,000 feet, the clam shell-like doors open to reveal pads covered with sticky oil that traps microscopic cosmic material. (NASA photo / Tom Tschida) After the flights, the pads are sent to NASA’s Johnson Space Center for analysis where they are opened in a dedicated clean room. Microscopic examination should reveal particles as small as two microns. For comparison, a human hair is from 50 to 100 microns wide.

The Large Area Collectors were developed by NASA's Ames Research Center for Earth science research in the 1980s. The devices are now part of the permanent sensor suite collection of NASA's ER-2s.