The mounting frame and rotating drum that holds the AirMSPI camera are visible in this view of the underside of the ER-2's forward payload bay. (NASA JPL photo)

A team of Jet Propulsion Laboratory researchers and their collaborators at the University of Arizona’s College of Optical Sciences in Tucson are developing a new prototype science instrument for a next-generation space satellite mission that would survey the impacts of aerosols and clouds on global climate change.

The Multiangle SpectroPolarimetric Imager, or MSPI, is a multi-directional, multi-wavelength, high-accuracy polarization camera. It is a candidate instrument for NASA’s Aerosol-Cloud-Ecosystem, or ACE, mission that had been recommended by the National Research Council's Earth Sciences Decadal Survey. ACE mission objectives include characterizing the role of aerosols in climate change, especially their impact on precipitation and cloud formation.

Image at right -- This set of images of the area near Air Force Plant 42 in Palmdale, Calif., was acquired by JPL's AirMSPI camera during its first checkout flight on Oct. 7, 2010. These preliminary results are not yet corrected for the effects of aircraft attitude fluctuations, which cause straight lines (like the airport runway) to appear slightly “wiggly." The top image combines blue, green, and red spectral bands to give a natural color rendering of the reflected intensity. The middle image combines a different set of spectral bands that are highly reflective in the near-infrared, highlighting the presence of vegetation. The bottom image shows the degree of linear polarization in the same spectral bands used in the middle image. The different appearance of the scene illustrates how polarization provides additional information for distinguishing light scattered by the atmosphere from light reflected by the surface. Each image covers an area about 6.8 miles wide. (JPL AirMSPI image)

An airborne prototype version of the instrument, the AirMSPI, was checked out recently on one of NASA's high-altitude ER-2 Earth Resources aircraft during a two-hour flight piloted by NASA Dryden research pilot Tom Ryan from NASA's Dryden Aircraft Operations Facility in Palmdale, Calif. According to JPL's MSPI principal investigator David J. Diner, the maiden checkout flight of the AirMSPI instrument Oct. 7 was very successful. A follow-up checkout flight is slated to occur soon. 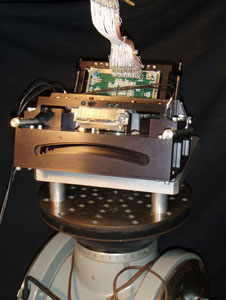 A laboratory test version of the new AirMSPI camera, called GroundMSPI, is shown on its test pedestal. The GroundMSPI has the same design and same set of spectral bands and polarization channels as AirMSPI. (NASA JPL photo) The MSPI is a follow-on instrument to the JPL-developed Multi-angle Imaging SpectroRadiometer, or MISR, that is aboard NASA's Terra satellite. An airborne version of that instrument, AirMISR, was previously flown on NASA's ER-2s during missions from Dryden. Some components of AirMISR have been incorporated into the new AirMSPI instrument.

"AirMISR had four spectral bands; AirMSPI has eight, and three of them are polarimetric," Diner explained. "This additional capability will provide greater sensitivity to aerosol optical and microphysical properties.

"The addition of more spectral bands and polarimetry helps pin down the particle properties better," he said. "Intensity and polarization imagery from the checkout flight look very good, so all indications are that the camera is working very well.

"The camera is mounted in a rotating drum which orients it at a pre-programmed set of pointing angles using a motor, and the multi-angular views also help in studying aerosols," Diner said, noting that the AirMSPI can also be used to study clouds and the Earth’s surface.

The novel polarimetric imaging technique used by the AirMSPI was developed by JPL as part of NASA’s Instrument Incubator Program, and the instrument was built under NASA’s Airborne Instrument Technology Transition Program.