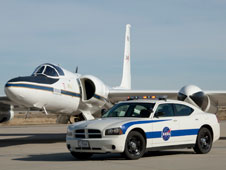 NASA's Dodge Charger safety vehicle is pictured with one of the ER-2 high-altitude Earth science research planes. (NASA/Tony Landis) Employees at Air Force Plant 42 in Palmdale, Calif., must have been surprised last November to see a late-model Dodge Charger chasing a NASA aircraft down the runway. Looking closer, they saw that the white sedan with blue trim was clearly marked as a NASA vehicle equipped with emergency light bar affixed to the roof and NASA logos all around.

The aircraft is a NASA ER-2, a civilian version of the Air Force's high-altitude U-2S. Based at NASA’s Dryden Aircraft Operations Facility in Palmdale, the two ER-2s have flown for the agency since the 1980s, conducting Earth science research.

Landing an ER-2 can be tricky. Its wings give the aircraft glider-like qualities and the aircraft is sensitive to crosswinds. Both the ascent and descent rates are fast and steep. Moreover, even normal operations in the ER-2 are difficult for the pilot encased in a pressure suit.

This is where the white Charger comes in. The 2010-model car, driven by another experienced ER-2 pilot called a mobile pilot, literally "charges" down the runway in high-speed chase of the ER-2. Communicating with the aircraft pilot, the mobile pilot calls out the distance in feet from the landing gear to the runway in an effort to help the pilot make a smooth landing. 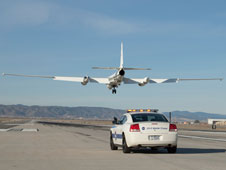 NASA’s ER-2 high-altitude research aircraft is guided to a safe and smooth landing. (NASA/Tony Landis) "The Air Force has used chase vehicles for a number of years," said former Air Force U-2 pilot and current Dryden research pilot Nils Larson. "NASA Dryden only hires experienced U-2 pilots (to fly the ER-2), but the decision was made to follow the military lead in this safety measure."

The Charger allows the mobile pilot to support the ER-2 pilot during all ground operations. His timely calls to the ER-2 pilot can make the difference in avoiding a mishap – whether it is from a ground taxi obstacle, hung pogo (auxiliary wheels) on takeoff, excessive crosswinds, engine malfunction or hydraulic failure.

"A chase vehicle has been historically proven to make the difference between a mishap and no mishap," said NASA ER-2 lead pilot Tim Williams.