Grow Text SizeShrink Text Size
Are These the DROIDs You're Looking For? 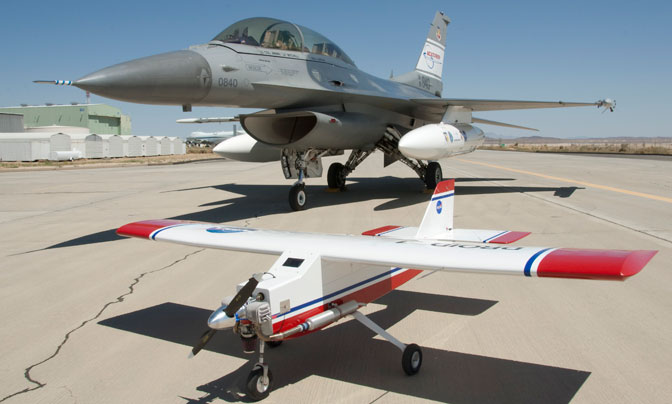 The modified "DROID" small UAV model aircraft in the foreground is being used as a test bed for further development of autonomous ground collision avoidance system software that was successfully flight-tested at NASA Dryden on the F-16D behind it in 2010. (NASA / Tony Landis) 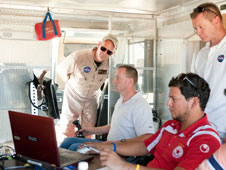 As NASA Dryden's chief pilot Nils Larson and DROID project manager Mike Marston observe, Dryden research pilot Jim Less flies the DROID for pilot proficiency while Victor Loera, a University Student Research Program intern from Cal Poly-Pomona, assists. (NASA / Tom Tschida) Are you a pilot looking for a handy means to help keep you out of trouble -- such as, say, flying into immoveable objects like mountains or the ground? Well, in the future, there may be an app for that!

A small hobby-type radio-controlled model aircraft is being transformed into a high-tech flight research aircraft at NASA's Dryden Flight Research Center and will be used to develop such an application for smart phones.

A second DROID aircraft is already serving as a small, low-cost, reduced-risk trainer for pilots of Dryden's unmanned aircraft systems, or UAS, while a third is used for NASA educational programs.

The flight research DROID aircraft is moving up to the big leagues as Dryden's Automatic Collision Avoidance Technology (ACAT) Ground Collision Avoidance System team installs software architecture on the aircraft in order to demonstrate that even the simplest flight systems may benefit from the ACAT Auto-GCAS software.

"We want to demonstrate that our software will work on a simple, hobby-grade UAS as well as on multi-million-dollar fighter aircraft," said Jack Ryan, chief engineer on Dryden's ACAT, and now DROID Auto-GCAS, projects. 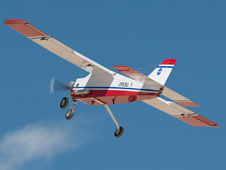 NASA Dryden's remotely operated "DROID-1" small UAV, one of three such model aircraft flown for aeronautical experiments, pilot proficiency and educational purposes at NASA Dryden, takes to the air during a pilot-proficiency flight. (NASA / Tom Tschida) Last year, NASA, the Office of the Secretary of Defense, the U.S. Air Force and Lockheed Martin completed a joint demonstration of the technology aboard an F-16D as pilots hurtled the airplane toward the ground and at mountains while flying hundreds of miles per hour.

Though the little DROID tools along at an easy 70 knots, it makes for an affordable, low-risk and effective way to test the miniaturized Auto-GCAS system before an operational system can be installed on a multi-million-dollar unmanned aircraft like Dryden's Ikhana, one of the project's eventual goals.

"We have several goals for this effort," said Auto-GCAS project manager Mark Skoog. "They include demonstrating the use of a smart phone to execute our Dryden-modified ACAT Auto-GCAS software algorithm, and collecting sufficient data to refine the system's performance.

"We also plan to demonstrate an Auto-GCAS integration approach for UAVs that requires no increase to aircraft weight," he added. "We then intend to transition the ACAT Auto-GCAS to an alternate platform other than a fighter aircraft, and demonstrate its portability onto a large-scale UAV." 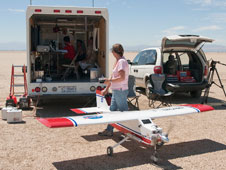 The Piccolo autopilot is a full-function, programmable, autonomous flight-capable autopilot. It includes lost communications capability; if radio communications are lost during a mission, the autopilot directs the plane to enter a loitering flight pattern while it waits to resume the mission. The autopilot provides above-average stability for such a small aircraft, and it also provides pilots with the feel and feedback of a larger aircraft.

New technologies to be tested by the project team include multi-trajectory ground-collision escape predictions, compressed digital terrain elevation data, and hosting of the algorithms, or software formulas, on the smart phone.

The smart phone will eventually be installed to fly aboard the aircraft following initial flights during which the phone will remain on the ground but will be used in the operational loop.

To test the Auto-GCAS software's capability to pull up and sharply turn the airplane to prevent collision, the DROID airplane will be purposefully aimed first at flat ground and then at local hills.

The DROID aircraft is flown remotely from a mobile ground-control-station van fitted with the latest digital flight displays. A safety pilot maintains visual contact with the airplane and can take over control with a handheld radio transmitter.

Mike Marston, Deputy Program Manager for Operations for NASA contractor Jacobs-Tybrin, is the DROID aircraft project lead as well as operations engineer for the Small UAS project, of which DROID is part. He's thrilled with the DROID team's progress so far.

"Supporting the ACAT SUAS Auto-GCAS effort has provided the DROID project team the opportunity to begin flight research with the DROID aircraft," Marston said. "We are very excited to begin this new phase because it introduces DROID as a low-cost, sub-scale solution to flight research opportunities. We see the potential for additional automatic collision-avoidance flight research prospects with the center's Unmanned Aircraft Systems Integration into the National Air Space, or UAS in the NAS, project in the near future as well."

NASA Dryden funds the DROID aircraft project, while the Auto-GCAS project flights are funded by the Office of the Undersecretary of Defense and the U.S. Air Force.