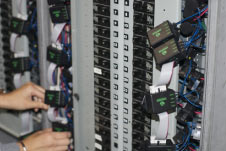 When Mark Chung, founder of Verdigris Technologies, returned from a three-week vacation to find a $500 spike in his electric bill, he was dumbfounded. All he had was a bill from PG&E detailing his aggregate usage for the month. A bevy of questions ran through his head: What was the energy hog? And why was it so hard to figure out?

In 2008, when Mark decided to begin his search for answers, the market only offered smart meters, which detailed aggregate building usage at fifteen minute intervals. That information was a step up from monthly data points, but it still did not provide him with the granular, real-time data he craved about every electrical appliance in the building. Mark realized knowledge was power; if he had known exactly what device had been triggering such high energy bills, he could have adjusted the device and his behavior.

Seeing the answer to the nebulous electric bill as an achievable solution with global impact, Mark envisioned a disruptive technology. Mark wanted more, better information, with easy installation, and at a reasonable cost. He surmised that by getting data from the building control panels rather than attaching to every appliance, he would get the aggregate electrical draws of every appliance in a building.

Along with his NetLogic colleague and friend, Jonathan Chu, Mark set out to tackle these questions based on his knowledge of deep packet inspection, which disaggregates and routes different types of packet data, such as voiceover IP or email. Mark and Jon knew the answers lay in creating specialized algorithms to disaggregate and identify multiple electrical signatures within one current. With an early prototype on a plug-strip, Mark and Jon were able to successfully disaggregate and tag the unique electrical signatures of individual appliances.

Mark and Jon patented their discoveries and officially incorporated Verdigris Technologies in June of 2010. When asked how they chose the name Verdigris, Mark stated, “Verdigris is the natural green patina that forms on copper over time. All over the world, electricity travels via copper wires. Verdigris Technologies is on a mission to “green” our electrical grid, building by building.”

Today, Building.AI is a comprehensive platform with the groundbreaking ability to measure any building’s electricity use down to a specific appliance. From the circuit panel, Building.AI can simultaneously and accurately measure as many as 1,000 different devices from each single sensor node, by sampling data 7,600 times a second. The algorithms are so powerful that they can sense an anomaly in an appliance’s “fingerprint,” indicating an imminent failure. Down the road, the Building.AI platform will add real-time alerts and notifications to optimize building efficiency, integrate with building automation systems, and participate in demand response and ancillary service markets.

As a leader in emerging technologies, NASA has played a pivotal role in engaging Verdigris under the Space Act Agreement and piloting Verdigris’ technology at the LEED-Platinum NASA Sustainability Base. As a federal entity leading the charge in environmental sustainability, NASA sees real potential in a cost-conscious solution to continuously optimize the operation and maintenance of the Sustainability Base.

Verdigris has been largely self-funded by initial founders as well as friends, family, and advisors who share the vision of greening the grid. Verdigris is growing organically by gaining a steadily increasing pipeline of paying customers excited about the technology and its benefits.

Historically, electricity innovation has remained static. With the recent explosion of the Internet and availability of cheap data transmission and storage, a dynamic approach to monitoring is possible. Now, with the development of Verdigris’ brain, Building.AI, the future of electricity monitoring is poised for a major shake-up.