From Star Trek to SCOUT: The Story of a Real-World Medical Tricorder 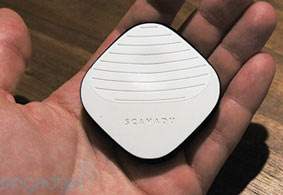 The 1960s TV series Star Trek was as popular for its plots as for its imaginary, futuristic technologies. One of those 23rd century technologies, the tricorder, is becoming a 21st century reality. And it’s being developed—appropriately enough, given its sci-fi space origins—at NASA Ames Research Center in Mountain View, Calif.

Scanadu Inc., founded in January 2011, has developed the Scanadu SCOUT, a medical tricorder inspired by the gadget the fictional Dr. Leonard McCoy on Star Trek used to collect data about crew members’ health. The SCOUT device has the potential to revolutionize medicine, both here and in space, for which it and Scanadu have been earning a lot of attention recently. The Scanadu SCOUT won the 2013 CES Best of Innovations prize for Personal Electronics. Scanadu has also been featured in Forbes’ 2013: The Year of Digital Health; was named Fast Company’s no. 2 on its list of Top 13 Health Stories of 2012; was among VentureBeat’s top 10 “med tech” stories of 2012; and was named the Wireless Health’s 2012 Company of the Year.

Scanadu’s medical tricorder SCOUT is a small handheld device for consumers to use in conjunction with a smartphone. Once the user places the SCOUT against his temple for 10 seconds, the device provides information on pulse transit time, heart rate, heart rate variability, electrical heart activity, temperature, and blood oxygenation. The device is currently awaiting FDA approval and is scheduled to be available later this year for $150.

Beyond Sci-Fi: The SCOUT’s Origins and Goals

Scanadu’s tricorder began its trajectory from sci-fi to real-world in 2007, when cognitive science researcher Dr. Peter Jansen began building tricorder-inspired handheld devices. In March 2012, Jansen showed off his open-source tricorder for the first time to the global press. Jansen’s Tricorder Mark 2 was built around a 180MHz Atmel AT92RM9200 microcontroller; two 2.8 inch 320 x 240 pixel OLED displays and resistive touchscreens; 32MB of RAM; and a microSD, on which the Linux operating system and data were stored. Jansen’s device measured atmospheric temperature and humidity, pressure, magnetic fields, ambient light and colors. His tricorder was a ‘Swiss Army knife’ with many potential uses—except the ability to detect neutron fields or radiation from supernovas, a la the Star Trek gadget.

Also in 2012, Jansen joined Scanadu, a start-up with the specific mission of building the medical version of his open source tricorder. Walter De Brouwer founded Scanadu in 2011 after a family medical emergency. De Brouwer was previously known for founding Starlab, a leading European research institute with such visionaries as Nicholas Negroponte and Stephen Wolfram on board.

Scanadu aims to revolutionize healthcare by putting sophisticated medical diagnostics tools into consumers’ hands. “We want to arm consumers with more information so that when they talk to their doctors, they know exactly what to say,” says De Brouwer, Scanadu’s CEO and founder. “We see this as a Goldilocks tool to better the patient/doctor relationship. It has the potential to be the biggest innovation in home medicine since the thermometer.”

After his hiring, Jansen immediately began work with the Scanadu team on a medical tricorder. The team includes well-known inventors and entrepreneurs such as Aaron Rowe, Ph.D (the hacker behind CheapStat), Dan Sokol (of Homebrew Computer Club fame) and Brandon Woolsey. Other notables at Scanadu include Dr. Alan Greene, author, public speaker and TV personality; ex-NASA British opto-electronics legend Anthony Smart, Ph.D., who heads up Scanadu’s science team; and Belgian übernerd Ivo Clarisse who, at age 18, was a key architect of the European Internet’s backbone.

Scanadu developed the SCOUT at the NRP in NASA Ames Research Center. The company benefited from advice offered by NASA employees and other companies on site with which it has a close relationship, such as Made in Space. By working with the 3D printing company, Scanadu has been able to quickly iterate through hardware designs—a key to the development of all Scanadu products.

Today, patients in the healthcare system are like astronauts on a mission, De Brouwer says. Both are in an unfamiliar environment and are forced to use the knowledge they have to the best of their abilities. Their survival depends on how quickly they can assess their situation. The challenge both face is an informational one. But in the future, healthcare will mutate, becoming a more efficient version of itself in which the patient will be discovered as the most underused resource, says De Brouwer.

“The grand theory of diagnosis will welcome new players next to doctors: machines, algorithms, patient advocacy communities and the crowd,” De Brouwer explains. “The Cambrian Revolution of medical devices and apps is the straw that will break the camel’s back. For centuries, we’ve been reading our health. Now, we will start writing it—changing it in real time, while mobile. Health was born to be mobile and at our fingertips. We will wear it like glasses, in our smart devices and in our bodies. Instead of us watching our health all the time, it will be watching us.”

Future versions of the SCOUT will have an onboard hyper-spectral camera and a microfluidic lab-on-a-chip, enabling the device to analyze rashes and infections and process blood and saliva samples. Based on these and other measurements, the SCOUT could then provide a diagnosis and advise its user on which course of action to take. The SCOUT will be able to instantly transfer patient data to a doctor if medical assistance is needed. If the user’s condition is treatable at home, the SCOUT’s diagnosis could prevent unnecessary trips to the emergency room or doctor’s office.

In 2013, Scanadu plans to bring several products to market in addition to the SCOUT, including diagnostic consumer disposables.

Scanadu’s small-footprint, smart medical devices could also prove critical for long-duration NASA missions. For example, Scanadu devices will be able to capture vital signs, images, and conduct surveillance to identify acute respiratory and urinary illness before a crewmember succumbs to or spreads the illness. By imaging skin or wound progression, the devices will be able to anticipate early degradation in crew performance.

In short, the information Scanadu devices collect will enable the triage and early intervention of conditions that would otherwise seriously compromise crewmembers’ health and fitness in space. Just like in Star Trek.