Built into a converted Boeing 747SP, SOFIA’s 2.5-meter (8.2-foot)-diameter telescope will make it the world’s largest and most sensitive airborne observatory. Flying at 39,000 to 45,000 feet, it will enable scientific observations that are impossible for even the largest and highest of Earth-based telescopes. Peering out through an open cavity in the side of the aircraft, the telescope will allow astronomers to obtain sharper infrared images than ever before. The astronomers, technicians, engineers, educators, and flight crew will work in a comfortable airliner environment during a typical eight-to-nine-hour flight. 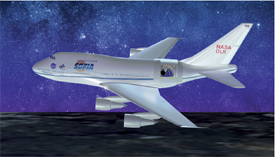 Based at NASA’s Ames Research Center near Mountain View, California, SOFIA is scheduled to make scientific flights two to three times per week. Expected to operate for at least 20 years, it will fly primarily from Ames’ Moffett Field and for one or two months per year from a base in the southern hemisphere; it will occasionally fly from other locations around the world, including Germany.

The Universities Space Research Association (USRA), the SOFIA development prime contractor, will also conduct scientific operations. L-3 Communications Integrated Systems is making the extensive modifications to the aircraft’s structure and control systems, and is also engineering the open cavity and the on-board computer systems for communications and telescope operations. Scientists from NASA’s Ames Research Center, the University of California, and other universities are working with the USRA scientific and engineering team to develop SOFIA’s specialized instruments, conduct observations, and support its scientific programs. SOFIA’s extensive education and public outreach programs are being conducted by an alliance of two well-known astronomy organizations, the SETI Institute and the Astronomical Society of the Pacific. The project is managed by NASA’s Ames Research Center, which is also providing design and fabrication of critical subsystems, along with engineering support.

SOFIA’s telescope was designed and built by a consortium of Germany’s leading aerospace companies — Kayser-Threde GmbH and MAN Technologie. The telescope program is being managed by DLR, the German Aerospace Center, which is supplying the telescope and 20% operational support in return for that portion of SOFIA’s valuable observing time.

Historical Background
Airborne astronomy began in 1966, when Dr. Gerard Kuiper, a prominent planetary scientist, flew a 30-cm (12-inch) telescope pointed out the window of a Convair 990. Having proven that airborne astronomy was feasible, scientists were soon flying an infrared telescope aboard a Learjet.

From 1974 to 1995, NASA operated the Kuiper Airborne Observatory (KAO), named after Dr. Kuiper, which carried a 91-cm (36-inch) reflecting telescope in a converted C-141 military cargo plane. KAO science findings, focusing on solar system, galactic and extragalactic astronomy, included discovery of the rings of Uranus, a ring of dust around the center of the Milky Way, ultra-luminous infrared galaxies, complex organic molecules in space and water in comets.

Featuring three times better image quality and greater than an order of magnitude higher sensitivity than its predecessor the KAO, SOFIA is the world’s largest mobile astronomical observatory, traveling to the right place at the right time to observe celestial events.

SOFIA Research
Many of the most interesting objects in the universe emit much of their energy in the infrared region of the electromagnetic spectrum. Yet ground-based telescopes can detect only limited portions of the infrared spectrum since most of it is absorbed by the water vapor in the Earth’s atmosphere. From its operating altitude of about 41,000 feet and above, SOFIA will avoid more than 99% of the obscuring water vapor, enabling it to make observations which are impossible for even the largest and highest ground-based telescopes.

Furthermore, vast reaches of the universe contain huge dust clouds which block visible light. However, they don’t block infrared radiation. As a result, infrared detectors can, in effect, “see through” these dust clouds to observe otherwise invisible objects inside and behind the clouds.

A key component of NASA’s Origins Program to explore fundamental questions about the universe, SOFIA will help astronomers learn more about the birth of stars, the formation of solar systems, the origin of complex molecules in space, the nature and evolution of comets, how galaxies form and change, and even the nature of the mysterious black holes lying at the centers of some galaxies, including our own.

SOFIA Instrumentation
An early suite of instruments planned for SOFIA:

HIPO is a special-purpose science instrument for SOFIA designed to provide simultaneous high-speed time resolved imaging photometry at two optical wavelengths. It will be possible to mount HIPO and FLITECAM (see below) on the SOFIA telescope simultaneously to allow observation at two optical wavelengths and one near-infrared wavelength. HIPO will be used for the first critical tests of the completed SOFIA Observatory. (P.I. Ted Dunham, Lowell Observatory)

FLITECAM is a facility-class multi-purpose near-infrared camera operating from 1-5.5 µm. FLITECAM will also perform moderate resolution spectroscopy to detect gas, dust, ices, and organic matter in space. FLITECAM is also designed to provide a tool for testing the image quality of the SOFIA telescope in an optional pupil-viewing mode. In its spectroscopic mode it can be used to study aircraft exhaust plumes and provide a calibration of the SOFIA water vapor monitor. (P.I. Ian MacLean, UCLA)

HAWC is a far-infrared camera designed to cover the 40-300 µm spectral region at the highest possible angular resolution. HAWC's goal is to provide a sensitive, versatile, and reliable far-infrared imaging capability for the astronomical community during SOFIA's first years of operation (P.I. Al Harper, U. Chicago).

FORCAST is a facility-class, mid-infrared camera for SOFIA. FORCAST has two channels with selectable filters for narrowband and broadband imaging in the 5-8, 17-25, and/or 25-40 µm regions. Simultaneous imaging in the two channels (wavelengths less than and greater than 25µm, respectively) is possible (P.I. Terry Herter, Cornell).

GREAT, a first-generation three-channel heterodyne instrument for high-resolution spectroscopy aboard SOFIA, is being developed by a consortium of German research institutes. High-spectral resolution is required to address a wide range of topics of modern astrophysics, from questions about planetary atmospheres and the interstellar medium in the Galaxy to investigations about the early Universe (P.I. Rolf Güsten, U. Köln).