The TRIPS concept has direct relevance to the Crew Exploration Vehicle (CEV) planned in the Exploration vision. TRIPS can be upgraded for increasingly more severe aerothermal entry environments.

For vehicles that are required to perform an atmospheric entry (Figs 1, 2), the vehicle is covered with an outer thermal protection system (TPS) which protects the vehicle from the intense heating environment. The TPS can also represent the first line of defense from the space radiation environment, if the materials making up the TPS are chosen wisely. Materials made from low atomic weight elements, such as hydrogen and carbon, are generally regarded as good candidates for radiation shielding, since less secondary radiation is produced during the collision process with high-speed cosmic rays and solar event particles. 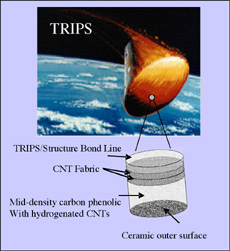 Polyethylene is one such material used in radiation shield designs. While polyethylene is not used in thermal protection systems, carbonaceous ablators like carbon phenolic and PICA (phenolic impregnated carbonaceous ablator), which have already flown on the Galileo and Stardust missions respectively, should have good radiation-shielding characteristics since they are comprised mostly of carbon and hydrogen. Other TPS materials, such as the ceramic tiles and blankets on the Space Shuttle, silicon based ablators, and metallic systems, are likely to have a reduced radiation shielding capability, based on the low atomic weight rule-of-thumb.

The development process starts with an evaluation of candidate thermal protection system materials (both existing and those under development) for their radiation shielding effectiveness. This evaluation will be both computational-- using radiation transport codes-- and experimental, using accelerators like the NASA Space Radiation Laboratory (NSRL) at Brookhaven. This will enable designers of vehicles such as the proposed crew exploration vehicle (CEV) or the manned Mars entry vehicle to make informed, multifunctional TPS materials choices. In addition to addressing aeroheating and radiation, we also plan to use the high strength and impact resistance of carbon nanotube composites to develop protective materials with a third element of multi-functionality-- MMOD impact protection-- using Whipple-shield approaches of the kind shown in cross section in Figure 1.

The concept of one protective shield for the triple threat is called TRIPS, ( T hermal, R adiation, I mpact P rotection S hield). We feel Ames is uniquely positioned within NASA to develop this concept because of our 40 + year history in conducting arc-jet testing and qualifying TPS materials, in conjunction with our strong expertise in nanotechnology. 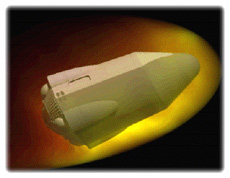 Our plans for TRIPS development include MMOD impact testing of TRIPS in the Ames Ballistic Range facility. This will provide end-to- end ground testing of TRIPS in the simulated space environment, guided by computational simulations for aeroheating, TPS performance, radiation and MMOD impact resistance, as illustrated in Fig. 2. This effort will also involve the NASA Goddard Space Flight Center.

The president's vision for space exploration calls for implementation of a sustained and affordable human and robotic program for the exploration of space beyond low Earth orbit. The goals of this vision are crewed return to the Moon by 2020 in preparation for human exploration of Mars and other destinations in the solar system. A significant technical obstacle that must be overcome to implement this vision is the development of an improved capability to reduce astronaut exposure to the space radiation environment. Given the additional need for vehicle weight reduction (affordability), there is an urgent need for multi-functional materials that perform structural or other roles, and also provide good radiation shielding capability. Ames is ready to implement a new approach for developing a single protective shield addressing three serious hazards present in deep space missions.