A standardized plasma diagnostic reactor, known as the "GEC Cell" is equipped with a wide range of diagnostics for measuring and understanding plasma physics and chemistry for a variety of low temperature plasmas.

We possess the capability to perform extensive analysis of plasma systems of relevance to space exploration. This system has been used to study a variety of plasma systems, and may be applied to studies of a variety of other processes, including etch processes for sensors, plasma enhanced deposition processes of novel materials, and plasma sterilization/treatment of surfaces for flight hardware and mission diagnostics.

The reactor used is a standardized reactor known as the "GEC Cell." The system was designed by the plasma research community with flexibility to utilize different diagnostics and to allow for comparison of results across different platforms. 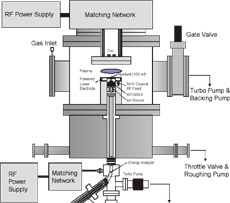 Figure 1. Schematic of the GEC Cell and various diagnostics, including mass spectrometer capable of mass and energy-selecting ions that pass through an orifice on the bottom electrode.

Chambers of this sort are located throughout many laboratories at various universities and national laboratories worldwide. The system at NASA Ames is equipped with seven separate diagnostic capabilities.

Present diagnostic capabilities of the reactor include:

A number of the processes involved in fabricating nanoscale devices rely on the use of plasma at some point in the fabrication scheme. Plasmas can also be used for a variety of exploration applications ranging from propulsion to decontamination. Plasma is a non-thermal chemical reactor, where reactions are driven by electron impact processes. 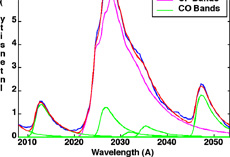 Figure 3. Sample optical emission data from a CF4/02/Ar mixture plasma. The data is fit by in-house models to predict emission bands from CF and CO and extract a neutral temperature for the plasma.

Because of their non-thermal nature, plasmas present very rich physical and chemical behaviors that are often difficult to predict. In production, a plasma process will produce many unknown variables that will need to be known and characterized to fully harness the capabilities of the plasma. Neutral chemistry and reactivity is determined by the density and energy of electrons created by the plasma, creating transient radical species that may contribute to deposition, etch and/or surface modification. Ion bombardment of surfaces in contact with the plasma may cause damage, chemically activate the surface, or remove unwanted materials and heat the surface. The plasma also produces electromagnetic radiation at wavelengths ranging from Microwave to the UV. Ultraviolet radiation from the plasma may contribute to materials modification. All of these processes act in synergy and impact each other. Basic plasma diagnostics coupled with modeling are required to unravel this interdependence. 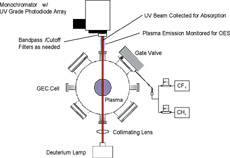 However, diagnostics of plasma is not always a straightforward exercise in and of itself. Means for extracting meaningful conclusions from collected data must be developed and applied. In addition to making measurements on these systems, we are furthering measurement science by identifying and removing artifacts and creating models to relate measured characteristics to meaningful data.