Approaching the limits in miniaturization for ultra-high density, low power consumption media, this capability may enable orders of magnitude increases in on-board data storage capabilities that are compatible with space exploration system resource limitations of mass, power and volume.

The increasing needs for on-board electronic memory will grow rapidly in order to keep pace with the requirements for subsystems involved in flight demonstration projects and deep space operations. Examples are Integrated Systems Health Management, in-situ mission management and scientific data analysis. At the same time, mass, volume and power must be minimized for mission affordability. Nonvolatile molecular memory is a very promising candidate to fill this need.

Our first target is to design and fabricate nonvolatile molecular memory on a semiconductor device platform (" hybrid integration "). An example is to assemble a functional molecular monolayer on the channel surface of a semiconductor nanowire FET. The redox molecule is used as a charge storage medium. Depending on whether electronic charges are stored in these molecules, the memory can be in either a "1" or "0" state, measured by the cell resistance. The basic operation of "programming" or "erasing" is implemented by applying appropriate electric bias on the memory device. The memory can be implemented with a variety of cell and array architectures (see Figure 1). 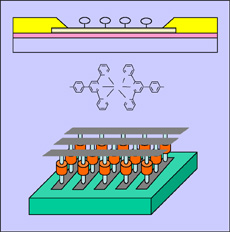 We use chemical approaches such as synthesis and self-assembly to construct molecules and molecule-semiconductor interfaces that can be integrated into existing semiconductor platforms to achieve new/improved device functions. One of our focuses is to translate the chemical and electrochemical properties of various classes of molecules into desired device characteristics through surface chemistry engineering. For example, we prepared a class of molecules that has a core structure that readily exchanges electrons, a peripheral structure ("linker") that modifies electron tunneling barrier and an end group that anchors the molecule onto a semiconductor/metal surface to create a robust contact.

With proper molecular engineering, data retention of over 600 hours has been achieved so far (see Figure 2). This extraordinary nature has also enabled us to prepare the first multilevel molecular memory (in collaboration with USC). The operation of molecules accepting or giving electrons adjusts the nanowire's electrical conductance to eight discrete levels. These levels represent the eight possible combinations of three bits: 000, 001, 010, 011, 100, 101, 110 and 111. The ability to store multiple bits of information on the same cell represents a powerful step towards high-density memory storage devices.

Our current focus is to push this molecular memory technology forward to create more robust and reliable devices that are suitable for space applications. To achieve this goal, we use a chemical approach called "covalent functionalization" that attaches molecules irreversibly onto a silicon surface so the resulting devices are stable and can function properly at above 400 C. This work will create seamless integration with the prevailing silicon technology that is already widely used. 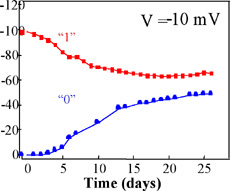 Our next step is to explore further scalability and functionalities that a molecule may offer. A molecule would be used as both conducting wire and charge storage element, enabling ultra-dense data storage systems. Understanding charge transport through molecule and transfer between molecule-semiconductor interfaces would be an emphasis. It is important to ensure fault tolerance and reliability of molecular devices since defects and fluctuations are inherent in these systems, which in turn affect device performance. Our research has shown that controlling interfacial properties and ensuring an ordered packing of the monolayer results in reliable electronic properties. Figure 3 shows an atomic resolution image obtained with a scanning tunneling microscope of one such well ordered molecular wire monolayer self-assembled on gold surface. A good control of interfacial properties is critical for developing manufacturable and reliable molecular devices in the future. 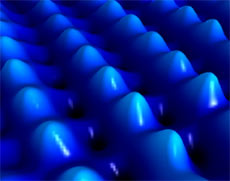 At the NASA Ames Research Center we are exploring next-generation information storage technology based on self-assembly of organic molecules. This novel technology would aim at mass data storage for image/signal processing in space exploration. The capacity would be orders of magnitude greater than the state-of-the-art silicon technology offers.