Mission Simulation Facility (MSF)
The MSF provides a software test bed which includes simulated robotic platforms, sensors, and environments. This simulation capability is applicable from early concept studies through to the evaluation of mature technology. 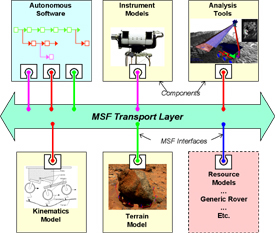 The MSF is a simulation framework that was developed to support the development of autonomy technology for planetary exploration vehicles. MSF can also support human-machine interaction including simulation-based augmented reality during actual missions. Simulation of mission scenarios is an important aspect of technology development. The MSF project is relevant to several programs of the proposed Exploration System, including a multiple robot network, automated assembly on planetary surfaces and in space, space construction, just-in-time-training, virtual robots & virtual humans, technology verification/assessment, and simulation-based acquisition.

Research Overview
NASA Ames’ Mission Simulation Facility (MSF) was designed to meet a development need that is often encountered by researchers in autonomy: how to carry out meaningful testing of autonomy software without a real-world robotic platform. The Mission Simulation Facility offers a simulated testing environment including robotic vehicles, terrain, sensors, and other features. The initial MSF release targets have been users researching autonomy for Mars rovers; however, the MSF technology solution is applicable to any robotic domain. 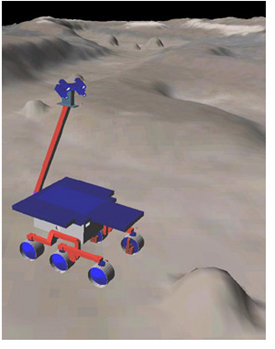 The MSF has been developed using a multi-platform, distributed architecture that is a specialization of the Defense Modeling Simulation Office (DMSO) developed High Level Architecture (HLA), which allows the simulation to be distributed across multiple machines and laboratories. Multi-platform support allows the MSF to easily integrate with existing simulation software developed on Unix, Linux, and Windows platforms. Among other unique qualities, the MSF has been developed with the goal of distributing the software to outside research groups and universities so that it can be applied to other research applications.

Image left: Simulation of a rover.

The MSF is a simulation system that represents a diverse collaboration effort. The core technology of the MSF offers a framework for connectivity among modules provided by users or collaborators. Major components of the synthetic world are the terrain surface, environmental conditions, virtual robot, simulated equipment, and graphical display.

The terrain used in MSF to date comes from collaboration with researchers at NASA’s Jet Propulsion Laboratory (JPL). The SimScape project is a server-based provider of artificial, realistic, or real-world terrain data including both physical and science characteristics.

Simulated robotic vehicles range from the very simple to the very complex. The MSF provides simple vehicle models based on either kinematics or dynamics. Other vehicle simulations, such as the ROAMS project at JPL can be interfaced with the MSF to provide data related to vehicle subsystems, terrain interactions, and power usage.

The MSF also provides a general interface to instruments and sensors that interact with a virtual site model, which has been developed through collaborative work with JPL.

Background
The exploration of remote environments using robotic systems is a very challenging task. The physical robot not only has to withstand the hostile elements of the environment, it also needs to demonstrate high levels of autonomy to accomplish its tasks without continuous human control or intervention. 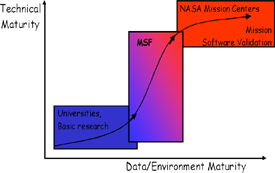 To accomplish critical science missions, a robot needs to be able to explore an unstructured world and make decisions based on information from on-board sensors. In addition, the robot needs to be capable of adapting its mission to unanticipated events in order to maximize the science return and ensure rover safety.

Research in autonomy for robotic platforms used in remote exploration is therefore critical for mission success. However, this research area faces several challenges when it comes to testing new autonomy concepts:

Custom simulators usually provide testbeds for individual algorithms without the context of an integrated robotic mission.

Access to hardware is either very costly or not available at all. Even when hardware is available, time and resource constraints often limit test scenarios to just a few environments. In addition, it can be difficult to control the parameters of the test, making the experiments hard to repeat.

To address these shortcomings the Mission Simulation Facility (MSF) project was initiated in early 2001 to support autonomy research for robotic systems.