Background
The MicroGravity Test Facility (MGTF) was originally developed for testing and validating propulsion, autonomous navigation, and control of the Personal Satellite Assistant (PSA). The MGTF is designed to simulate the microgravity environment on board the International Space Stations (ISS) US Lab Module. Six Degrees of Freedom (DOF) are achieved with a 3 DOF gimbal system, suspended from a 3 DOF translation crane, allowing vehicle motion in all directions. Precision sensors in the x-y-z axes measure vehicle thrust down to a fraction of an ounce. These measurements are then used to actuate external motor controllers in the suspension system, which simulate the vehicle’s motion in a microgravity environment. 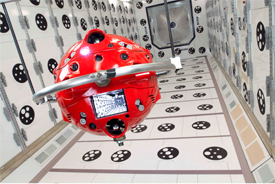 Currently the MGTF is being used to test and validate the PSA’s ability to navigate using a fiducial-based vision system. In addition, the MGTF can simulate disturbances likely to occur on ISS, such as an overheated rack or experiment, or unusual noise from faulty equipment. The PSA then seeks out and identifies these anomalies.

In addition to simulating the US Lab Module, the MGTF could also be configured for external spacecraft simulation, such as autonomous vehicle inspection and autonomous rendezvous.

Relevance to Exploration Systems
The MGTF facility is a state-of-the-art test facility allowing for microgravity simulation of small spacecraft. The technology developed for the MGTF could be scaled to support even larger and more complex simulations such as rendezvous and docking maneuvers for two independently operated vehicles, as well as terrestrial lander studies for various microgravity environments.