The LifeGuard system was developed for monitoring the health of astronauts to ensure their safety during space flight and extravehicular activities and to monitor their physiology during exercise routines. This device will be further developed to support medical emergency contingencies during long duration missions and addresses a number of the Bioastronautics Critical Path Roadmap risk areas.

Research Overview
Human Powered Centrifuge
The LifeGuard I system was tested on the Human Powered Centrifuge at NASA Ames. The Human Powered Centrifuge or “Space Cycle” was developed as a research tool to provide exercise and gravitational forces simultaneously using only human effort to obtain physiological, psychological and human performance data. Test subjects wearing CPOD units were pedaling and their vital signs were transmitted wirelessly to a Blutetooth access point and from there to a Bluetooth-equipped laptop in a nearby monitoring room. The vital signs could be monitored in real-time, but were also locally logged on the CPOD. The capability of the CPOD to measure 3-axis acceleration data proved to be very useful in this study. The data collected was later compared to the data collected by the original centrifuge equipment.

NEEMO
The NASA Extreme Environment Mission Operations, a cooperative project between NASA and the National Oceanic and Atmospheric Administration (NOAA), was the first large-scale NASA deployment of LifeGuard. It was developed by astronaut training specialists to utilize an undersea research habitat off the coast of Key Largo, Florida, as a multi-objective mission analog for long-duration space flight. Each mission is designed to expose astronauts to extreme environments for training purposes and to research crew behavior, habitability, and space analog life sciences. Objectives of the missions are very diverse and contain many of the typical space mission type activities such as extra vehicular activities (EVAs), in-habitat science and research, educational, public outreach, and media events. NEEMO missions are also frequently used to evaluate new equipment for potential use on Shuttle or Station. The LifeGuard system was tested during the “NEEMO V” mission in June 2003. The test protocol included exercise tests, remote diagnostic of recorded data, and a test to determine the range of the Bluetooth link. The astronauts who tested the system provided valuable feedback which was subsequently used to implement a number of improvements.

Mt. St. Helens, Washington
This climb tested the effectiveness of a series of design changes implemented after the Mt. Adams field test. These included a more optimized analog front end circuit, shorter ECG leads, different electrodes, the replacement of the waist belt by an Amphipod fanny pack, and a firmware upgrade. Seven CPODs were tested and 9 hours of good data were obtained from every single unit. 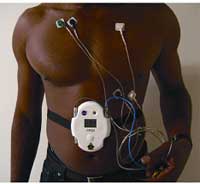 KC-135 Field Test
The goal of this experiment was to demonstrate the feasibility of using a novel wearable, wireless physiological monitoring device (Lifeguard) on subjects during parabolic flight profiles (micro gravity and hyper gravity) onboard the KC-135. The primary objective was to determine whether traditional vital signs (ECG, temperature, heart rate, respiratory rate, O2 saturation, and blood pressure) and activity can be correlated with gravitational and environmental changes to evaluate ease-of-use in an altered gravitational environment. The reliability of the Lifeguard system to assess a range of physiologic parameters during microgravity and hypergravity, and during the transitions to these altered g-force states was successfully demonstrated. The CPOD device reliably logged data of all subjects, and the feasibility of Bluetooth streaming could be validated as well. The Bluetooth link functioned flawlessly over an even greater range than expected for a high-noise, “metal-can” environment like the KC-135. The base station laptop located at the end of the KC-135, near the seats, was able to receive data from a subject near the front of the plane.

Background
LifeGuard I
A state-of-the-art wearable vital signs monitoring system has been developed by the NASA Ames Astrobionics team. This system is capable of logging physiological data as well as wirelessly transmitting it to a portable base station PC for display purposes or further processing. It was developed for astronauts, but has many potential uses in clinical, home-health monitoring, first responder, and military applications as well. 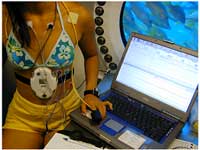 The core component of the system is a small, lightweight, wearable device called "CPOD" that is worn on the body along with several sensors attached to it. These sensors measure ECG (2channels), respiration, activity (3-axis acceleration), temperature (skin or ambient), heart rate, pulse oximetry (SpO2), and diastolic and systolic blood pressure. The wearable device acquires and logs these physiological parameters up to 9 hours and can download or stream them in real time to a base station PC on demand.

LifeGuard II (in development)
A Modular architecture re-establishes the flexibility of the SHMS system while maintaining the robustness of the LifeGuard system: