In-situ resource utilization will enable the affordable establishment of extraterrestrial exploration and operations by minimizing the materials carried from Earth and by developing advanced, autonomous devices to optimize the benefits of available in-situ resources.

The Intelligent Robotics Group (IRG) laboratory at ARC includes multiple rover-style platforms. These have been designed for rapid prototyping and testing of human-robot interaction systems. Autonomous operation, robotic vision, navigation and mobility technologies are tested on the K9 rover at the adjacent Marscape Test Facility, an outdoor 3/4 acre high-fidelity planetary science test yard for testing of remote and autonomous science exploration, explicitly designed to incorporate those aspects of the Martian environment and geology of greatest scientific interest.

Over-the-horizon navigation and single-cycle instrument deployment are key autonomy capabilities needed for future Mars rover missions, such as MSL 2009. Marscape will provide a realistic testbed for the development of both. The topography is sufficiently varied that a FIDO class rover, such as K9, will not be able to observe more than a fraction of the site at any one time.

ARC also operates the Planetary Aeolian Facility in conjunction with Arizona State University. A key element is the the Mars Surface Wind Tunnel. This tunnel is unique because the building in which it is located can be depressurized to a pressure of 7.5 Torr to simulate the Mars atmosphere. 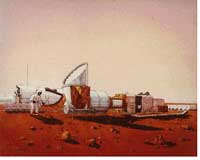 For liquefying both breathable gases and propellants for ISRU, cryocoolers are the key component, and the Cryogenics Laboratory at ARC has several thousand square feet of floor space and roughly a third of this is devoted to the cryocooler testing facility. The flight-like cryocooler developed for NASA by Northrop Grumman was tested in this facility to verify its performance before shipment to Glenn Research Center. ARC has developed coolers from 50 mK up. Recently, ARC developed a flight qualified pulse tube cryocooler in collaboration with DoD, and demonstrated a liquefier for ISRU.

ARC has performed extensive work in rapid prototyping and testing of human-robot interaction systems. Overall resources include the K9 rover built upon a Fido-style JPL rover base, autonomous deep-hole drilling systems, and a variety of autonomous vision-based navigation, diagnosis, planning, and control systems. Visualization tools suitable for field trialing include the Viz software system and associated software, which has been used at Mars Ops in JPL for the Mars Exploration Rover missions.

Other activities include development activities related to ISRU gas separation, purification, storage, and compression processes of gases. Ames was involved in the development of an adsorption compressor for CO2, a Buffer gas generator, and a Methane storage unit for the "PROMISE" flight project.

For liquefying both breathable gases and propellants for ISRU, ARC has been involved in the development of flight cryocoolers and liquefiers.