We are developing thermoelectric power sources that will be able to generate power from even a small temperature gradient, such as temperature variations available internally and externally throughout the human body. This advancement is made possible by recent improvement in the power generation efficiencies of nanoengineered thermoelectric materials and has numerous applications.

Thermoelectrics display promise for powering human support and health monitoring systems on long manned missions, reducing the need for carrying power sources capable of lasting over extended trips, monitoring and therapeutics of human health during space flight, as well as the on-board powering of micro and nanodevices. The materials may be used as implantable devices potentially installed within the spacesuit material.

Thermoelectric materials are semiconductors that generate electric current when a temperature differential is applied across a p- and n-type pair of towers connected electrically in series. This phenomenon is known as the Seebeck Effect and was discovered in the late nineteenth century. Due to the novel properties of nanoengineered materials, the power conversion efficiency of thermoelectric materials has increased significantly in recent years. Some of the most dramatic advances have been made in a category of thin films known as superlattices. The design goal of nanoengineered thermoelectrics is to disrupt phonon paths, thus lowering the thermal conductivity of the material, while leaving intact or enhancing electron paths to facilitate electrical conductivity. Superlattices achieve this through controlled lattice mismatch at the interfacial boundaries of ultra thin thermoelectric semiconductor layers (1-5 nm). 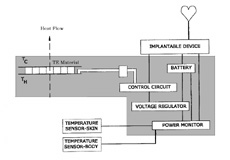 Superlattice materials are very thin layers of semi-conductor material (Bi2Te3, SiGe, SbTe, etc.) with pairs of p- and n-type legs connected electrically in series and thermally in parallel (a unicouple arrangement is also a possibility). Various groups have employed different methods of producing these materials, including metalorganic chemical vapor deposition (MOCVD), sputtering, pulsed laser deposition, hot pressing, and molecular beam epitaxy (MBE). We are constructing an apparatus to produce these films by MOCVD and will optimize the product for these uses. Present research in this direction is being performed under a Space Act agreement with TE Bio LLC.

A highly controlled growth process is needed, coupled with in-situ material measurement methodologies. The ability to truly engineer the interfacial characteristics of the superlattice and manage deposition species and rates is vitally important to creating a material that can eventually live up to the rigorous process control required to provide a truly reliable, long-term solution.

Figure 2. Schematic depicting a thermoelectric device implanted beneath the skin.

The most commonly understood technical risk associated with thermoelectric materials is the necessary improvement in figure of merit, ZT, to establish useful power conversion efficiencies. For implantable thermoelectrics the ZT tradeoff is one of engineering difficulty. The lower the ZT, the larger the aspect ratio of the TE towers required for reduction of contact losses, and the greater the density of towers required to reduce the footprint of the resulting implanted device. By utilizing superlattice thermoelectric material fabrication, the material ZT may be increased to between 1.5 and 2.4 (compared to 0.9 for bulk Bi2Te3), reducing the number of elements required by a factor of three. Superlattices do present another technical challenge in respect to high aspect ratios and potential shear and fracture failures. We are pursuing several mechanisms to increase the strength of the material, including altering growth conditions, surface engineering and introducing ceramic fillers.

As many of the nano-enabled components under development are engineered into miniaturized micro and nano-devices they must be partnered with conventional power sources that greatly limit the realizable size reduction and useful lifecycle. A reliable long-lived power generation component that can be manufactured using common MEMS equipment and that is inherently scalable would be a very useful tool for nano and micro device design. Thermoelectric elements that continuously trickle charge in a miniaturized rechargeable battery or capacitor configuration, generating power from even small temperature variations, could meet this need. There currently exists an important opportunity to employ these devices for the monitoring, diagnostic, and therapeutic missions relating to astronaut healthcare and support systems. For instance, the temperature gradient across space suits in outer space can conceivably autonomously power sensors, backup communication systems, cameras, etc., and reduce the load of power storage equipment. Other external applications include sensors that monitor vital signs embedded in patches applied to the skin. Internal applications take advantage of the gradients within the body between the core and the skin, generally 2-7'C, and include many human performance enhancing devices as well as "smart" microdevices such as drug pumps and other implants that can simultaneously monitor and deliver measured therapeutics dependent on real-time feedback. The same thermoelectric materials and technology being developed and engineered for manned space missions can be employed to enhance the quality of life on earth by being applied to the biomedical industry.