A nanosensor technology has been developed using nanostructures: single walled carbon nanotubes (SWNTs), combined with a silicon-based microfabrication and micromachining process. This technology provides a sensor array that can accommodate different nanostructures for specific applications with the advantages of high sensitivity, low power consumption, compactness, high yield and low cost.

Nanotechnology based chemical sensors can provide high sensitivity, low power and low cost portable tools for in-situ chemical analysis in space and terrestrial applications. Our generic nanosensor platform is suitable for detection of gases and volatile organic compounds. This platform can be used for chemical analysis in gas phases, and can also be extended for use in liquid phases.

A chemical sensing platform-based nanotechnology has been developed. This platform provides an array of sensing elements for chemical detection. Each sensor in the array consists of a nanostructure-- chosen from many different categories of sensing material-- and an interdigitated electrode (IDE) as a transducer. It is one type of electrochemical sensor that implies the transfer of charge from one electrode to another. This means that at least two electrodes constitute an electrochemical cell to form a closed electrical circuit. 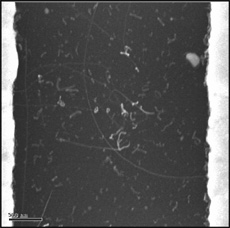 Due to the interaction between nanotube devices and gas molecules, the electron configuration is changed in the nanostructured sensing device, therefore, the changes in the electronic signal such as current or voltage were observed before and during the exposure of gas species (such as NO 2 , NH 3 , etc.). By measuring the conductivity change of the CNT device, the concentration of the chemical species, such as gas molecules, can be measured.

This sensor array with carbon nanotubes (see figure 1) has been exposed to nitrogen dioxide at various concentrations from 10ppm to 400ppb at room temperature (see figure 2) and ammonia at the concentration range of 50ppm to 5ppm at room temperature (see figure 3). With the same sensing materials and same gap size, the sensor array provided very reproducible sensor performance from one sensing element to the other. The sensor can detect NO 2 at the ppb level of concentration as well as for NH 3 from the estimation of the detection limit using a signal to noise ratio. The test results show that the sensor responded to NO 2 via a decrease of its resistance while it responded to NH 3 via an increase of its resistance. This directional change in resistance provides a differentiation of power to this sensor for the detection of NO 2 and NH 3 .

Nano chemical sensors will greatly increase science measurement capability for earth science, space science, life support systems in long duration missions, and planetary exploration. For example, this carbon nanotube sensor has demonstrated higher sensitivity and lower power consumption than the state-of-the-art systems. Combined with MEMS technology, light weight and compact size sensors can be made in wafer scale with low cost. This nanosensor technology can extend its application in civilian areas such as explosives detection,

Nanostructured materials such as carbon nanotubes and metal oxide nanowires promise superior performance over conventional approaches due to the ability to direct the selective uptake of gaseous species based on their controlled pore size and chemical properties, increased adsorptive capacity due to their increased surface area, and the effectiveness of carbon nanotubes as matrix materials for gas and vapor detection. In addition, CNTs can be functionalized, doped with catalysts and mixed with polymers accordingly to achieve the selectivity.

Our current sensor development results have proved that the carbon nanotube sensors can offer very high sensitivity for NO 2 , ammonia, methane, acetone, benzene and toluene detection, with detection limits in the lower ppm to ppb level and response time in seconds to minutes. Each sensor draws the power in micro-watts to milli-watts. The size of the detector is designed to be 5 ´ 5 ´ 1 for 32 sensing elements detection system. The weight of this detector will be less than 2 kg.