NASA Exploration Missions will require new advances in engineering design and optimization.   Evolvable Systems technologies are poised to deliver these advances through the use of algorithms that can automatically design and optimize systems without being explicitly told how to do so.

The benefits of the proposed technologies fall under sustainability, affordability, reliability, and modularity.

In order to realize a sustainable campaign of space exploration, the underlying technologies must enable affordable, reliable, and effective exploration and infrastructure systems.   Evolvable Systems algorithms are highly adaptable, relatively fast, and can be set up to optimize cost, robustness, and performance by embedding these measures directly into the multi-objective utility functions that comprise the algorithms.

Evolvable Systems algorithms are relatively inexpensive to develop and can result in great savings over the life of a mission.   Hence they contribute to affordability .   These algorithms increase reliability in that they can design-in redundancy, fault tolerance, or defect tolerance at design time or in-situ .   Examples include: fault-tolerance to extreme radiation or temperatures that damage programmable logic devices (eg, FPGAs).   Evolvable systems algorithms can automatically design modular subsystems.   Examples include evolving a modular robot made of identical components; evolving a generalized robotic controller algorithm. 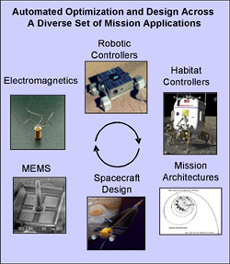 In addition to the automated design of antennas previously mentioned, another successful application area involves fault recovery for field-programmable gate arrays (FPGAs).   An example scenario where such techniques are applied is when a spacecraft flies through an extreme radiation environment and is damaged by ionizing radiation causing a fault in one of its FPGAs.   After the fault is detected, an evolutionary algorithm runs and quickly repetitively rewires the FPGA until the chip becomes functional again.   It does this by exploiting healthy resources on the device, and sometimes even the damaged resources to regain a fully-functional chip. Right:Key application areas for investigation.

Specific objectives of Evolvable Systems research are to develop automated design software that: a) dramatically increases the effectiveness of systems engineers and mission planners as compared to their current tools; b) allows FPGA devices to recover from radiation and temperature-induced faults, both transient and permanent in real-time; c) can automatically design high-precision MEMS gyroscopes for spacecraft navigation systems; d) can automatically design robotic and habitat controllers that operate autonomously; e) are able to design and optimize large-scale structures such as launch vehicles, spacecraft, rovers and habitat modules; f) are able to aid mission planners via automatic exploration and optimization across mission planning tradeoff spaces.

An additional advantage of our automated design algorithms is that they can design structures in-situ .   By this we mean that an object can be designed inside the environment it will be deployed in. For example: antennas are designed to achieve a certain performance in free space, yet when an antenna is affixed to a spacecraft, the performance can be greatly affected by reflections of the signal off of the spacecraft.   In our approach, we can evolve the antenna while it is affixed (in simulation) to the target spacecraft.   By doing so, performance gains may be realized since the algorithm can exploit the physics of the environment it is working within.   Other potential benefits are: smaller size, higher performance, lower cost, greater reliability.

Background Future NASA exploration missions will require advanced spacecraft architectures and hardware systems to achieve sustainability, affordability, and reliability.   Critical to this goal is the need for advanced computer algorithms to manage the design complexity both for static design challenges on the ground (pre-launch) and dynamic design problems in space (post-launch).   Exploration missions will require both hardware and software systems that can respond to and recover from component faults and failures and that can adapt, self-improve, self-repair, and self-reconfigure based on changing mission requirements and unexpected events.

The Evolvable Systems Group at NASA Ames Research Center investigates computer algorithms that automate the design and optimization of complex engineering systems for NASA exploration missions.    The core technologies that we investigate are based on adaptive and evolutionary algorithm methods.   The methods, which include genetic algorithms, genetic programming, artificial neural networks, simulated annealing, and variants thereof, have recently begun to produce human-competitive results in real-world application domains.   As an example, in NASA's Space Technology 5 (ST5) mission requirements-compliant evolved antennas were produced and are scheduled to be flown in 2005 (Figures, page 2, bottom). The evolved antenna will be the first evolved hardware ever flown on a NASA mission.   An initial design was as good as a human-designed model and outperformed it in critical metrics such as mass and cost.   A second design was evolved in less than four weeks after an orbit change, proof that these techniques aid designers in adapting quickly to changing requirements. 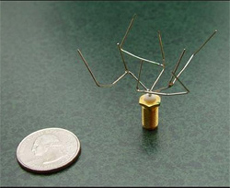 The key application areas we investigate are outlined in the figure on this page and include: electromagnetics, MEMS, electronic controllers, self-repairing reconfigurable chips,