Cryogenic Fluid Management (CFM) technology is an integral part of exploration systems for Earth-to-Orbit Transportation, manned missions to the Moon and Mars, Planetary Exploration, and In-Situ Resource Utilization (ISRU). CFM also plays a key role in infrared and x-ray astronomy, biological sciences, and fundamental investigations into the origins of our universe.

Benefit
The challenges of NASA’s Exploration vision require advanced Cryogenic Fluid Management technology. The Exploration vision requires high performance propulsion systems (high specific impulse, Isp) for both human and robotic missions. The vision includes in-space cryo-propulsion stages, and In-Situ Resource Utilization (ISRU) for cryo-propellant production and liquefaction of breathable gases. Cryogenic propellants such as oxygen, methane, and hydrogen can satisfy this requirement. The current State of the Art (SOA) for cryo-propellant storage is a loss rate of 3%/month in Low Earth Orbit (LEO) using passive technology. Advances in passive thermal control technology might reduce losses to 1%/month, still an unacceptable rate for a 2+ year mission to Mars. By using cryocoolers to balance the entire parasitic and internally generated heat loads in the cryo-tank, no propellant will be lost, resulting in a Zero Boil Off (ZBO) system, and eliminating the need for oversized tanks and extra propellant. Each pound of propellant tank mass saved is directly tradable for payload mass.

Research Overview
Cryocoolers are the key component of ZBO propellant storage systems. New developments are required to significantly improve the performance of coolers for the ZBO storage of liquid hydrogen. For ZBO liquid hydrogen systems, cooling powers of 1 to 20 watts are required at 20 K. These systems require extensive development to achieve the same levels of efficiency that are reached for the higher temperature liquid oxygen (LOx) and methane ZBO coolers. At present, no long-lived 30 K or colder closed-cycle coolers have flown in space. Current commercial, non-flight pulse tube cryocoolers are available for temperatures down to 3 K, however, these machines are not space qualified and are inefficient. 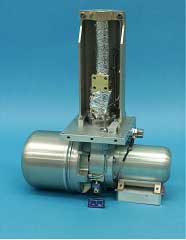 The final development frontier for LH2 coolers is to achieve high efficiency and reliability at lower operating temperatures. Pulse tube and Stirling coolers offer the best opportunity for achieving high efficiency at these temperatures and power levels. The key to such improvements is the design of the regenerator and the selection and forming of the regenerator material. The ARC Cryogenics Group and its partners have been developing high heat capacity rare earth alloys for just this purpose.

Along with advancing the SOA of cryocoolers, system studies are also being conducted with GRC, JPL, and MSFC. One of the major advances in this area is the development of an analytical tool for sizing the ZBO system, including tankage, passive insulation, cryocooler, radiator, and power system mass. This model optimizes cryogenic thermal storage system performance. Tank sizes and configurations for selected mission scenarios can be easily and quickly evaluated. Topologies can be compared and tradeoffs performed to arrive at a concept optimized for specific mission parameters.

Once the system is adequately modeled, the insulation system can be designed appropriately. New materials and integration techniques can be quantitatively analyzed with our SOA transport phenomena test facilities. Our thermal conductivity apparatus features a sample chamber within a vacuum chamber (isothermal). A hot plate is embedded in the sample to minimize alternate heat paths. In this manner, the thermal conductivity can be determined within an accuracy of a few percent. What makes the apparatus truly unique is that the thermal conductivity measurements can be made in the presence of a gas, including planetary analogues.

The Cryogenics Group has also established a database for cryogenic thermal contact conductance down to superfluid helium temperatures, characterized swirl in liquid helium in a rotating Dewar, measured thermal conductivity of cryogenic insulation in the presence of gases, and developed a cryogenic mirror test facility for IR astronomy.

The Cryogenics Group has developed coolers down to 50 mK, including dilution coolers, helium-3 refrigerators, and adiabatic demagnetization coolers. Recently, ARC developed a flight qualified pulse tube cryocooler in collaboration with DoD for demonstrating Zero Boil-Off (ZBO) storage and is working with Atlas Scientific and with the DOE to develop high performance regenerator materials to improve cryocooler efficiency. In addition, ARC has several unique capabilities for measuring the thermal conductivity of insulation materials and moisture absorption in the presence of gases, including planetary analogues within an accuracy of a few percent.