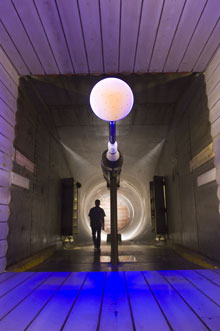 3) CEV Integrated System Health Management (ISHM) project is a NASA project lead by NASA Ames with teams from NASA Johnson; JPL; and NASA Kennedy (KSC), Florida. This project's primary objective is to expedite and reduce the cost of CEV processing and refurbishment if performed at Kennedy and to define requirements and improvements to assess CEV health and status during quiescent periods.

4) NASA Ames is providing expertise and test capabilities to the NASA Johnson team designing the crew interfaces in the CEV.

6) NASA Ames is leading a project that performs a Simulation Assisted Risk Assessment of the CLV. The objective of this work is to provide risk information through the modeling and simulation of critical failure modes of the Crew Launch Vehicle.

7) NASA Ames is providing Integrated System Health Management support to the CLV upper stage and vehicle integration projects through trade studies and requirements generation in the areas of fault detection for crew abort and ground checkout at NASA Kennedy.

For more information and images of the wind tunnel tests, please visit: