NASA Simulates Small Martian 'Dust Devils' and Wind in Vacuum Tower
Befitting the powerful Roman god of war for which Mars was named, the red planet's 'dust devils' can be as lofty as five miles (eight kilometers) tall. A dust devil is a wind-generated vortex, or whirlpool in the atmosphere. Nearly every child has seen small whirlwinds that spin dust or leaves in spirals on Earth.

Besides large 'dust devils,' the martian environment, from time to time, spawns huge dust storms that may cover nearly the entire planet. Both martian winds and dust devils, big and little, are constantly changing the planet's environment. 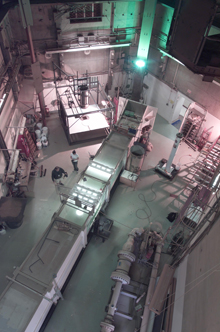 To expand knowledge of dust devils and the red planet's feisty winds, NASA is simulating both of them in a laboratory at NASA Ames Research Center, located in California's Silicon Valley. Scientists are interested in Mars' dust devils because they produce particle motion that may well change Mars' landscape by moving material and causing erosion.

The laboratory has two pieces of equipment that scientists use to study how winds and dust devils may affect the red planet's landscape and environment. 'The Mars Surface Wind Tunnel' simulates normal martian winds, and the 'Vortex Generator' simulates dust devils.

"Sand and dust storms on Mars result from local and regional winds blowing across the surface and from vortexes, called dust devils," explained principal investigator Ronald Greeley, a scientist at Arizona State University, Tempe. The university operates the simulation equipment for NASA. "Active dust devils have been seen from orbiting spacecraft and from the Mars Pathfinder Lander," he said. A former NASA scientist, Greeley, along with a colleague, designed the Mars tunnel, which was built in the mid 1970s.

Dust devils are common in dry and desert landscapes on Earth, as well as on Mars. They form when the ground heats during the day, warming the air just above the surface. As the warmed air nearest the surface rises, the air spins. The spinning column moves across the surface and picks up dust. This dust makes the vortex visible and gives the 'dust devil' its characteristic appearance.

The NASA Mars Surface Wind Tunnel is housed within a 100-foot-tall (30.5-meter) concrete tower's interior space. Scientists decompress the atmosphere within the tower to very low air pressure to simulate Mars' atmosphere at ground level. Originally, NASA built the tower, the 'Structural Dynamics Laboratory,' to test large rockets and simulate their ascent through Earth's atmosphere. Located at NASA Ames, the facility was completed in 1965, and included heaters, shakers and noisemakers to shake, bake and sound-blast rockets. 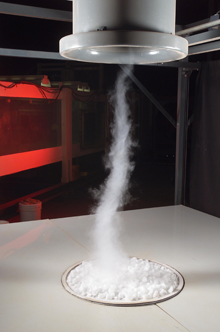 The small Mars Surface Wind Tunnel sits in the center of the six-foot (1.8 meter)-thick concrete floor of the facility. The wind tunnel is about 43 feet (13.1 meters) long and has a test section measuring four feet (1.2 meters) wide and three and a quarter feet (1.1 meters) high. The plywood and Plexiglas tunnel resembles a railroad tunnel through a mountain -- a straight, tube-like formation to allow air to pass freely through it. In contrast, many wind tunnels that engineers use to test airplane models are loop-shaped because air recycles through them.

To mimic wind conditions at normal Earth-like air pressure, a fan generates air speeds of as much as 36 feet (11 meters) per second through the Mars wind tunnel. However, instead of using a fan to simulate martian wind, scientists send high-pressure air out the end of the tunnel, which draws thin air into and through the tunnel.

The simulated martian atmosphere in the wind tunnel is so tenuous that a fan would have to spin at too high a speed to blow thin wind through the test section. The high-pressure air draws thin air through the tunnel like a vacuum cleaner sucks air. Scientists also compare this process to a person sucking water through a straw. The resulting simulated Mars wind moves at about 230 feet (70 meters) per second.

To one side of the wind tunnel is the apparatus that makes simulated Mars dust devils. This 'vortex generator' consists of an eight-foot (2.4-meter) vertical frame supporting a four-foot-tall (1.2-meter) stovepipe-like tube, measuring 1.5 feet (0.5 meters) to three feet (0.9 meters) in diameter. Blades spinning inside the tube push air to its edges, creating a vortex, which simulates a martian dust devil. Simulated dust devils become visible once dust particles are injected into the airflow. The study of simulated martian dust devils has been ongoing for a few years in the Mars wind tunnel facility. Experiments also take place at Arizona State University to simulate dust devils on Earth for comparisons with those of Mars.

During experiments, scientists inject various kinds of particles into the wind flow of both the dust devil generator and the Mars wind tunnel to imitate conditions on Mars. Because of gravitational differences between Mars and Earth, scientists often use walnut shell dust or particles to simulate rock dust on Mars. Scientists also use beach sand, chromium dioxide (similar to sand paper grit) and silica flour - as well as assorted other materials to simulate different martian particle sizes and densities.

"The facility is 100 feet (30.5-meters) tall, and it can be pumped to 4 millibars, which is close to a 'hard' vacuum, but we take it to only 10 millibars of pressure," explained Eric Eddlemon, member of a team conducting Mars dust devil and wind simulations at NASA Ames. "Mars' atmosphere is about 7.5 millibars, or less than one-hundredth the air pressure on Earth's surface," added Eddlemon, who manages the facility for principal investigator Greeley, who is conducting dust devil studies. 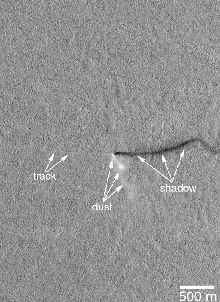 Image right: From the Mars Global Surveyor (MGS) Mars Orbiter Camera (MOC): At The center right of this image (above left) is a dust devil that, on May 21, 2002, was seen climbing the wall of a crater at 4.1°S, 9.5°W. This crater (above right) is in western Terra Meridiani. The dust devil was moving toward the northeast (upper right), leaving behind a dark trail where a thin coating of surficial dust was removed or disrupted as the dust devil advanced. Dust devils most commonly form after noon on days when the martian air is still (that is, when there isn't even a faint breeze). On such days, the ground is better able to heat up the air immediately above the surface. As the warmed near-surface air begins to rise, it also begins to spin, creating a vortex. The spinning column then moves across the surface and picks up loose dust (if any is present). The dust makes the vortex visible and gives it a tornado-like appearance. The dust devil in this image has a very short, dark shadow cast to the right of the bright column; this shadow is short because the sun was nearly overhead. Image courtesy: NASA.

"We know there are dust devils on Mars, because we have seen them in action," said Eddlemon, speaking about pictures various spacecraft have taken of Mars' surface that show evidence of active dust devils. "They leave tracks behind on the martian soil."

Comparing the martian whirlwinds to the four-foot (1.2 meter)-tall ones scientists create in the laboratory, Eddlemon said, "On Mars, dust devils can be thousands of times bigger. Typically, what we are interested in, though, is the diameter of the 'core' (eye) of the dust devil."

There is a difference between Mars wind blowing dust, and 'dust devils' lifting dust. Like a vacuum cleaner, a dust devil has lower pressure in its core, which means that it is easier for dust devils to put dust particles in motion than for wind to do so. 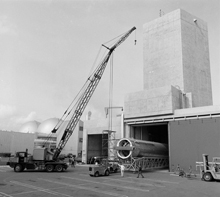 "We've generated thousands of dust devils in both Earth conditions and simulated martian conditions," Eddlemon said. "What we are interested in is the types of material that martian dust devils are able to move."

"Dust on Mars is extremely fine, being about the size of flour used in baking bread," Greeley said. For simulated Mars dust, researchers often use 'Carbondale red clay,' because it is less than 0.0000787 of an inch (two microns, or 2 millionths of a meter) in size.

"In the past, dust devil tests have taken place on a flat, relatively smooth test bed, but now we are introducing rough surfaces to simulate rough terrain," Eddlemon said. "We've put various size pegs on the surface of the test bed to create hill-like conditions."

"We're looking at the atmospheric processes that move material on the surface of Mars," he said. "We are also doing experiments to find out how much material can be suspended in simulated Mars dust devils."

For more information about the Mars Wind Tunnel facility visit: