The Fiery Return of NASA's Space Dust Cargo
This story was originally released on Nov. 11, 2005, before the Stardust capsule successfully returned to Earth on Jan. 15, 2006. - In search of clues about the origin of life on Earth and other secrets, a crew flying on a NASA DC-8 aircraft will study the small, speeding Stardust capsule returning from space early in 2006.

Two years earlier, in January 2004, the Stardust spacecraft flew within 147 miles (236 kilometers) of the comet Wild 2 (VILT-TWO) and survived the high-speed impact of millions of dust particles and small rocks up to nearly two-tenths of an inch (one half centimeter) across. With its tennis-racket-shaped collector extended, Stardust captured thousands of comet particles.

The returning Stardust capsule will strike Earth's atmosphere during the early morning darkness in mid-January 2006, at eight miles (12.8 kilometers) per second – more than 10 times faster than a speeding bullet. That is fast enough to go from San Francisco to Los Angeles in only one minute. The DC-8 crew will face the daunting task of tracking and observing the 101-pound (45.7 kilogram) conical object as it hurtles through the atmosphere and slows before the spacecraft finally parachutes down in a Utah desert.

Scientists aboard the DC-8 also will assess how well the Stardust capsule's heat shield protects its precious cargo of comet dust and interstellar grains.

Though scientists will study this captured space dust for years to come, the separate team of researchers aboard the DC-8 will gather data only during the brief re-entry of the space capsule into Earth's atmosphere.

The mini, Apollo-like capsule will shoot down through the air at the highest spacecraft re-entry speed into Earth's atmosphere ever, generating extremely high temperatures. The capsule's special carbon-based heat shield, developed at NASA Ames Research Center in California's Silicon Valley, will protect the priceless cargo of comet dust and interstellar grains. During this blistering re-entry, the DC-8 crew will take surface-temperature and shock-radiation measurements of the heat shield as part of it burns away. Shock radiation is light emitted from extremely hot air. Scientists will study this light to learn how hot the capsule gets and what chemical reactions are taking place. These chemical reactions will result from of the violent breakup of air molecules that collide with vapor in front of the speeding capsule.

At the same time as the DC-8 crew is flying its mission, amateur astronomers, willing to endure the cold of the bitter winter, may contribute to the study by simply photographing the incoming capsule, noting their global positions and later providing that information to mission scientists.

One of the goals of the researchers aboard the DC-8 is to measure the capsule's re-entry brightness. Scientists expect it to peak at approximately the brilliance of Venus for roughly 90 seconds. The capsule will be brightest 37 miles (60 kilometers) high over the town of Carlin, Nev., as the spacecraft approaches. This will occur in the early morning cold and darkness on Sunday, Jan. 15, 2006, shortly before the spacecraft parachutes to a landing at 3 a.m. MST. The landing zone is a restricted area – the Utah Test and Training Range, located southwest of Salt Lake City.

"As the observer sees the approaching capsule, it will appear as a point of light," said Peter Jenniskens, principal investigator of the Stardust Sample Return Capsule Re-entry Observing Campaign. Jenniskens is a meteor astronomer at the SETI Institute, Mountain View, Calif. "After it passes the observer, the back of the capsule will be less bright, and it will quickly fade. Each observer will have a different experience," Jenniskens added.

The special carbon-based heat shield material designed to protect the Stardust capsule is a candidate for potential inclusion on NASA's next planned spaceship, the Crew Exploration Vehicle (CEV), NASA engineers say. This prospective future use is one reason they plan to study the Stardust capsule as it slams into Earth's atmosphere, and the shield rapidly heats due to friction with the air.

"Our main interest is the performance of the heat shield and the chemistry that takes place in it as it vaporizes and erodes during the descent and re-entry," said Dave Jordan, a NASA Ames engineer and project manager for the capsule observation mission.

The spacecraft will penetrate Earth's atmosphere as if it were a normal meteor, according to Jenniskens.

"The capsule will be an artificial meteor that we can study for clues about how life's molecules may have first formed on Earth," Jenniskens said. "The carbon from the heat shield will react in the shockwave, making new molecules that would have seeded Earth at the time of the origin of life. The carbon in comet dust could have done the same," Jenniskens ventured.

After scientists examine the dust carried within the capsule, they may soon learn what carbon compounds are found in comet dust. The spacecraft flew through comet Wild-2's dust cloud and captured some of it in a very light substance, called 'aerogel.' 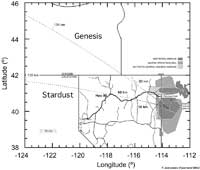 "It's a little bit like collecting BBs by shooting them into Styrofoam," said Scott Sandford, an astrophysicist at NASA Ames and a Stardust mission co-investigator. "Some of the grains are likely to have exotic isotopic ratios that will give us an indication that we're looking at materials that aren't as old as the solar system, but are, in fact, older than the solar system," Sandford asserted.

Another mission objective was to expose the spacecraft to the interstellar dust stream for 150 days to grab interstellar particles. After collecting the particles, the aerogel collector retracted into the capsule. Stardust will be the first mission to capture and return a substantial sample from outside Earth's moon system.

The capsule will approach the landing zone from a westerly direction. The best opportunities for viewing the re-entry will be along Highway 80 between Carlin, Nev., and Elko, Nev., and further east to the Utah border, where the capsule's front side can be observed before it passes over the observer on the ground. The peak brightness will decrease further from Carlin, lessening to about the brightness of Venus (+0 magnitude) when seen from Boise, Idaho, and Salt Lake City. Viewing will not be as good at sites east of Carlin where the craft will be seen from behind.

For certain viewing locations just north of the trajectory line, the capsule will appear to pass by the moon (above it, or below it, depending on the viewer's location). By choosing their positions carefully, some observers will be able to see the capsule pass in front of the moon. As seen by the naked eye, the capsule will disappear in the glare of moonlight, but by looking through telescopes, observers may see a tiny dot, perhaps trailed by a dark wake of dissipating heat shield material and hot air. The trail may form a thin line behind the capsule, especially near the point of peak brightness where ablation (erosion of the heat shield and dissipation of the heat that results from the friction of the heat shield with the atmosphere) is most intense.

"If somebody could see that line, that would be fantastic, because it would tell us how much carbon is being lost by the heat shield at that moment," observed Jenniskens. "It would be better yet if several observers at different locations were to videotape the entry of the capsule appearing in front of the moon because then we could trace the ablation of the carbon along the capsule's trajectory, especially at locations between Carlin and Elko," he added. Videographers should fix the focus of their cameras at 'infinity,' because auto focus may be unreliable for nighttime recording, according to mission technicians.

The best way to see the capsule pass in front of the moon would be with a large telescope at high magnification, according to Jenniskens. Due to the long viewing distances, the tiny capsule will appear as a dark dot, only 1-2 arcseconds across, but darker if the capsule is clearly visible. One arcsecond is 1/3600th of a degree.

Moving at many times the speed of sound, the capsule will take only two to three video frames to appear to pass by the moon.

When the Stardust capsule does not appear to be near the moon, observers should look for 'chemi-luminance,' a faint glow in the wake of the capsule. This glow may be created by chemical reactions between the hot air in the capsule's wake and ozone in the air.

According to scientists, observers using the naked eye will likely see the capsule as a very bright pinpoint of pink-white light. This color is the signature of excited atoms and molecules in the shock wave formed as the capsule strikes the atmosphere, according to George Raiche of NASA Ames.

Light emission is caused by violent breakup of the air molecules that collide with the speeding capsule. For the most part, these molecules are oxygen and nitrogen atoms and ionized nitrogen molecules, Jenniskens noted. Ablation products could cause violet light resulting from chemical reactions between carbon and air.

"What the re-entry of the capsule will tell us is how those carbon compounds might be chemically changed when comet dust enters Earth's atmosphere. Life's molecules need nitrogen and oxygen combined so that they can become useful ingredients for living things," Jenniskens said.

In effect, the capsule will be an artificial meteor that we can study for clues about how life's molecules may have first formed on Earth, according to Jenniskens. "This will be the first time we will have scheduled observation of a manmade object entering the planet's atmosphere at speeds comparable to natural fireballs," he noted.

While most of this chemistry happening at high speed is very quick, complex and elusive, it is possible to recognize the most brightly radiating compounds in this fiery process and to look for clues about what conditions the molecules must endure.

Finally, the conical spacecraft will drop straight down over the restricted zone in Utah, floating down by parachute.

Once the capsule has landed in Utah, researchers will collect debris from the surface of the shield and study how much of the heat shield was lost during re-entry. "This is called an ablative heat shield," said Michael J. Wright of NASA Ames, another scientist working on the project. "By vaporizing some of the material from its surface, the heat shield vapor carries some of the heat from friction away from the capsule, keeping the payload cool," Wright explained.

After they recover the capsule and its precious cargo, scientists will transport the space dust to a laboratory at NASA Johnson Space Center, Houston, for analysis.

"The sample(s) brought back from comet Wild-2 will tell us is what carbon compounds are in cometary dust," Jenniskens observed.

"There'll be a small team of us at Johnson Space Center who will assess what we actually got back from the comet so we can verify we did get a useful sample," Sandford said. "A small portion of the samples will then be used to make a preliminary study of the returned material. After the preliminary examination is complete, all the samples will be made available to the general scientific community for more detailed study. My guess is people will be asking for and working on these samples for decades to come."

Amateur astronomers who wish to submit photographic, video or other data to Jenniskens will find directions and more information about the airborne campaign at:

For more information about the Stardust mission, see:

or view the fact sheet at:

To view a map of the Stardust path, see: