NASA Artificial Intelligence Could Help Astronauts Work More Efficiently in Space
In the vast blackness of space, where Earth appears to be just a small dot, artificial intelligence someday will help astronauts and robots make swift decisions and plan quickly, without much assistance from home.

Even at the speed of light, about 186,000 miles per second, radio messages take at least 11 minutes to reach Mars (depending on its varying distance from Earth.) Because of time delays like this, human and robotic crews exploring deep space must depend less on help radioed from colleagues on Earth. Far away in space, astronauts will not only have to craft complex plans in 10 minutes or less, but they may need to make difficult, split-second decisions on their own.

According to NASA scientists, this vision of the future also includes potential cost reductions, since there would be less need for large teams on Earth to make detailed daily plans for deep space missions.

NASA is developing ever more potent artificial intelligence planning software to make distant missions more practical. In the near term, NASA scientists are creating software to reduce Mars teams' daily planning time and costs for missions that are about to begin. For example, in comparison with the Mars Exploration Rover (MER) missions, scientists hope to reduce planning time by a factor of 10 for missions in the near future. Increasingly streamlined, resource-saving approaches like this will play an important role as early as the Phoenix mission to the red planet's North Pole region, scheduled for launch in 2007.

Phoenix's 2008 landing zone is located in an ice-rich region. The lander's robotic arm will dig into the arctic terrain in search of clues to the geologic history of water on Mars. The spacecraft also will look for evidence of zones that could support microbial life. 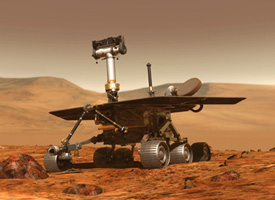 Meanwhile, more than a year after landing on the red planet in January 2004, two Mars Exploration Rovers continued to look for clues that water may have existed in large amounts on the planet. Mars science teams made detailed plans to orchestrate the rovers' moves.

"The Mars Exploration Rover activity planning has taken the human team on Earth about one-and-a-half hours every day for each of the two rovers, " said Alonso Vera, who leads a group developing artificial intelligence software at NASA Ames Research Center, located in California's Silicon Valley. "Our goal is to reduce planning time to about 10 minutes for a typical Mars surface mission, and we are a good part of the way there now," he ventured.

A team of a half dozen scientists at NASA Ames also is improving planning software, which has been used by the Mars rover teams. This software is called the Mixed-initiative Activity Plan Generator (MAPGEN). More than a year after the spacecraft landed on the red planet, scientists continued to use this automated planning and scheduling software to help build and edit science activity plans for the Mars Exploration Rovers based on a 'wish list' of observations and the rovers' available resources.

"MAPGEN is based on 'Europa,' an artificial intelligence planning tool that supported the Deep Space 1 mission before being used on the Mars Exploration Rover (mission)," explained Vera. 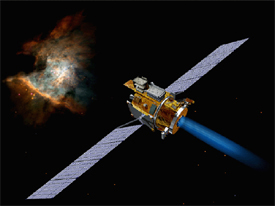 NASA launched the 945-pound Deep Space 1 probe on Oct. 24, 1998, to test 12 advanced technologies, including Remote Agent, an artificial intelligence program, intended to lower the cost and risk to future science-driven missions. Remote Agent's basic goal was to demonstrate that spacecraft could operate and be controlled with minimal human help.

NASA's continuing efforts to evolve artificial intelligence for use in future space mission operations are pushing the development envelope, according to Vera. Currently, new software is under development for daily team use during upcoming Mars surface missions. This software is called the 'Science Planning Interface for Engineering' (SPIFe), pronounced 'spiffy.' Scientists hope it will "dramatically" reduce the number of people needed to achieve mission goals, according to Vera.

"The heritage we're looking at with SPIFe is the Constraint Editor software and the MAPGEN software, used for the two Mars Exploration Rovers," said Mike McCurdy, a member of the SPIFe software development team at NASA Ames.

Constraint Editor has allowed Mars Exploration Rover mission scientists to make direct, single changes in their daily rover activity plans. The software also adjusts entire plans to take into account individual changes that scientists make. Meanwhile, MAPGEN software has made some mission choices, and scientists have made the rest of the mission decisions, according to McCurdy. 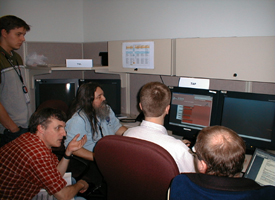 With artificial intelligence software like MAPGEN - 'mixed initiative' systems -- "the human and the computer are equal partners in a dialog that happens around the generation of a plan," Vera asserted. "Each brings different skills to the table. The human can focus on what humans are good at (high-level decisions, for example), while the computer can focus on what computers are good at -- making thousands of smaller decisions -- or automatically enforcing rules and constraints," he explained.

"Before, people have been sitting down and deciding step-by-step what is going to happen during a mission," McCurdy noted.

"Generally, what we are looking at is what kind of information people need when they are planning the rover's work," McCurdy said. "We're looking at how we can make that information readily available."

"A scientist may say, 'Go look at that rock,' and the computer could say, 'in order to look at the rock, you must consider x-y-z.' There is a dialogue between the human beings and the software," McCurdy explained.

"This is a team effort," said McCurdy. "The whole collaboration is called Ensemble, which is shared between the NASA Jet Propulsion Laboratory, Pasadena, Calif., (JPL) and NASA Ames. The JPL component is based on the Mars Exploration Rover Science Activity Planner, now called Maestro," McCurdy explained. 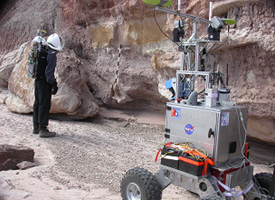 SPIFe software also is vital, because it may well be the forerunner of future software that could help astronauts work independently far from Earth. An important part of the Vision for Space Exploration is to enable crews in spaceships or on the moon to be more self-sufficient. Crews using advanced planning software would not have to depend on people on Earth for plans, according to Vera. Human-robot teams could inspect their vehicles or habitats and make repairs unassisted, Vera ventured.

Image left: Scientists testing software to allow for wireless communication. Humans do not have to dedicate continuous attention to the robot. Image courtesy: NASA.

"A lot of space station time is spent doing repairs," said Vera. "If you are going to provide tools that allow an astronaut to plan a complex sequence of activities for a human-robot team, that astronaut has to be able to plan very quickly in order to adapt to the specific conditions. An hour-and-a-half to plan is excessive," Vera added. "You've got to be able to do it in 10 minutes or less."

One of the capabilities added to SPIFe is multiple timelines for scientists to use instead of the one timeline that MAPGEN provides, according to Vera. Also, SPIFe enables users to view information in many different ways so scientists can better see and grasp problems and processes, said Vera.

"You can view plans in a timeline, or a waterfall-like time link," Vera said. "An activity plan has hundreds of parts. One change can affect all the other activities," he explained.

"We built in a lot of feedback about how a change affects everything else," Vera said. "But in the end, it's the human who is responsible for the plan."