Dreams Are Creating a Future, New NASA Spaceship
"There is nothing like a dream to create the future." -- Victor Hugo, 19th-century author of The Hunchback of Notre Dame and Les Misérables 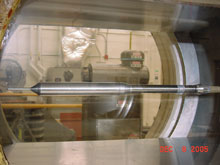 More than a century after they were written, Victor Hugo's words apply to today's dreams of advanced human space travel.

What once was only a dream that envisioned a new spaceship that would fly astronauts back to the moon and beyond is now taking small steps toward reality as NASA's Constellation Program takes shape.

The tests are supporting the initial development of NASA's new spaceship, its hardware and software. Wind tunnels use giant fans or high-pressure airflow to create wind to flow over vehicles, engines, rockets or scale models, to simulate flight performance. Researchers use such wind tunnel 'flights' to assess new geometric configurations before incorporating them into space vehicle designs.

"We think this test will be useful for NASA engineers in making technical decisions regarding possible configurations for the new vehicle," said Don Nickison, a NASA Ames engineer in charge of wind tunnel tests involving the new spaceship. "I would expect, as the design matures, that we will be ready and willing to support validation wind tunnel tests for heat shields, parachutes and other systems associated with this new vehicle."

"It's exciting because it's the kind of work that NASA is stressing now," Nickison added. "We're always very happy to be of support to the rest of the team at NASA, including NASA's Johnson Space Center, Houston and other NASA centers across the country." 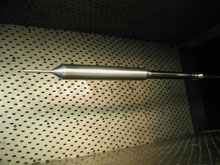 In December, Marshall conducted the first wind tunnel tests on a 16.5-inch scale model of the CEV/CLV in a 48-inch-long, 14-inch-by-14-inch cross section wind tunnel. The tests demonstrated NASA engineers' ability to 'fly' a craft on the ground to assess new geometric configurations before designs are incorporated into more sophisticated models.

"The first series of tests provided the first experimental data on the aerodynamic characteristics of the Crew Launch Vehicle," said Lawrence Huebner, CLV aerodynamics panel chair. "We are using the data to understand launch performance, as well as for comparison with computational analyses during ascent to orbit."

Marshall engineers will continue testing through mid-March. The tests will serve as a foundation for more rigorous testing in the spring and summer of the launch vehicle design. More tests will be conducted on larger models of the vehicle design in larger wind tunnel facilities at NASA's Langley Research Center near Hampton, Va., and at Ames.

For Ames, the tests are among the first steps in a program to assist in developing a new space travel system.

"The NASA field centers are working together like we did in the past to develop the shuttle orbiter aerodynamic and aero heating databases," said Rob Calloway of NASA Langley. "Our analytical methods, used in concert with our wind tunnels, will ensure the fly ability and survivability of the human-rated Crew Exploration Vehicle and the Crew Launch Vehicle."

Langley's tests of a CLV model are tentatively set to begin March 1 and will run about four days.

The Constellation Program at Johnson is responsible for developing the CEV and CLV. The program is also tasked to develop a new Cargo Launch Vehicle and related systems aimed at forming the basis for more ambitious exploration missions to the moon, Mars and destinations beyond. The program combines large and small transportation systems, surface and space-based infrastructures, and communications, science and robotic systems, enabling humans the capability to explore the solar system.