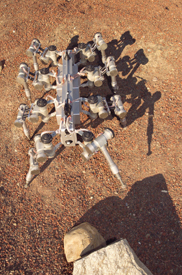 Scientists say descendants of the dog-sized Scorpion robot, able to climb over boulders and rappel on cables down cliffs, may help explore Mars. Scorpion's inventor, Professor Frank Kirchner, is developing a second prototype at the University of Bremen in Germany.

"The most interesting scientific sites on Mars are not on very easy terrains," said Silvano Colombano, a scientist and the NASA collaborator on the Scorpion robot project at NASA Ames. "Very often, the sites that are interesting are on the sides of a cliff, for instance, or very rocky areas. So we need the kind of robot that can go into these areas, look at the geology and pick up samples that are difficult or impossible for a rover, which is about the size of a small car, to go into," Colombano explained.

"If you want to go over rocks, you need large wheels, and you can't go in small spots," said Colombano. "With small wheels, you get stuck in sand. With legs, you can climb over things and negotiate a wide variety of terrains."

Robots with legs are just at the beginning of their development, according to scientists. Engineers who are developing legged robots are turning to biology for inspiration. The Scorpion robot uses a walking pattern inspired by the movement of scorpions coupled with reflexes that will help the robot to free a stuck leg, among other things.

"People at Ames will put a model of the inner ear in the robot to see if it helps the robot maintain its balance," said Colombano. A human inner ear has a cluster of hollow areas that interconnect like a system of tiny caves and helps a person to maintain stability and hear. Colombano said that a NASA Ames scientist, Richard Boyle, is developing the unique inner ear for the robot. Scorpion also has a TV camera and uses ultrasound, like a bat uses echoes, to sense distances to objects.

If scientists command the Scorpion to go straight ahead, its sonar will help the robot sense when to stop before hitting an obstacle. "The robot's feet also can act as sensors, just like we can feel our terrain below us," Colombano added. 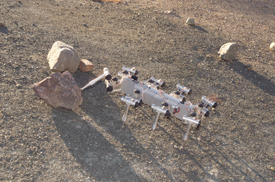 "At this point, the only mind that it has is about the size of that of a cockroach," Colombano said. "It has a set of patterns for moving, and a set of reflexes that allows it to go over small rocks. But it doesn't reason about what to do. It doesn't have any higher planning abilities. Those can be put in a different computer, or they can be programmed on board, and these abilities will be included in the next stage of development for the system," he explained.

"If you see it move now, it looks like it's ready to go, but in addition to higher cognitive levels, we also still have to make sure that the particular martian environment can be coped with in terms of dust and temperature and all of the things that haven't really been taken into account yet," Colombano said.

One of the important problems that engineers need to overcome to improve the Scorpion is to provide it with enough power to complete complex planetary missions. "It needs to be connected to a larger robot that can provide it with power, or recharge it," explained Colombano. Computer 'brains' for the Scorpion could be both inside it and inside another robot or spacecraft, depending upon conditions on the planet and the problems scientists wish to solve, according to Colombano. 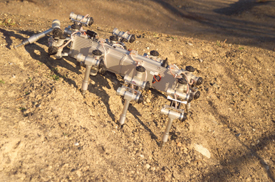 "We would like to make it a lot smarter," Colombano said. "And the ability to learn would be nice to include in the system." Scientists believe a later version of the Scorpion robot could act as a scout for a larger rover, and explore areas where a rover should not venture.

More advanced robotic exploration possibilities include teams of robots capable of supporting each other, Colombano said. Robots could even repair each other, by trading parts and finding other ways to continue working, he added.

A Scorpion robot could help people on Earth, according to scientists. For instance, researchers have proposed that the robot might explore a largely inaccessible mine where extremophile life forms exist. Extremophiles are forms of life that live in extreme conditions, such as in very high or low temperatures or in very acidic environments. "Maybe this robot could also go into rubble in small areas and find survivors of an earthquake," Colombano said.

"Legged robotics is very much at the beginning. Eventually, there will be a convergence of robotics with the skills of biological systems. The robots are always going to be the pioneers, but they'll never be able to completely take the place of humans," Colombano said. "We have to think in terms of developing an exploration strategy that will include robots and people, and this collaboration ultimately will be the way we explore the universe."

For audio file interview segments related to this story, please click on this URL:

For publication sized images, please click on this URL: