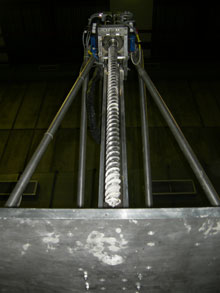 NASA scientists plan to drill someday into the surface of Mars to look for water and signs of possible life. So, scientists are developing an automated, unmanned drill rig that can operate totally on its own, unsupervised for hours at a time.

From July 14 to July 29, 2006, NASA researchers will test an automated prototype Mars drill rig at the Haughton Crater on Devon Island in Canada's Nunavut Territory north of Ontario and Quebec. During the Drilling Automation for Mars Exploration (DAME) Project, artificial intelligence will have complete control of a drill rig for the first time. The main objective of this field exercise is to evaluate DAME's automation software.

An eight-person team, made up of scientists and engineers from NASA Ames Research Center, Moffett Field, Calif., will set up drilling equipment that is a little taller than a human being, and sits in a footprint of about one square yard (one square meter). Earth-based experiments will help scientists learn if synthetic brainpower is able to control a rig on Mars for many hours of drilling without human intervention. Future Mars missions with drills will likely have the ability to communicate with Earth only once or twice a day.

Imagine using a remote control drill press in your garage, and not knowing if the drill were vibrating and about to fail until as many as 20 minutes later. For this reason, NASA Ames scientists are working to develop a combination of three kinds of artificial intelligence that could control a drilling rig on Mars for hours on end without human involvement.

"Drills get stuck all the time… It's still an art form for humans drilling on Earth," said Brian Glass, a scientist at NASA Ames and the DAME Project principal investigator. Glass also explained that the artificial intelligence that controls the prototype Mars drill works like an experienced person who feels and listens to the drill's vibrations that provide clues as to how well drilling is going below the surface of the ground. 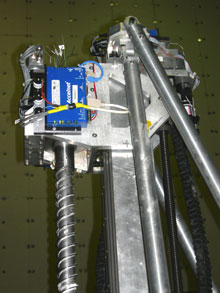 DAME's drilling automation will detect several common types of drilling failures. These include binding, hitting unusually hard material, failure caused by a rock falling into a drilled hole, jamming on cuttings, or the drill being shoved down too hard and jamming. Specific types of telltale vibrations precede and accompany these failures. These vibration categories are one set of clues that helps the drilling automation system to identify precise drilling problems. The DAME drill's vibration- and sensing-detection system is an adaptation of methods engineers use to find aircraft structural defects and cracks.

"We have a combination of three different kinds of intelligent software," Glass said. "One is model-based reasoning, another is a neural network that looks at drill vibrations and the third is rule, or table-based, fault matching." This software will evaluate drill vibrations to help the rig's automation system understand what is happening at the tip of the drill.

"For the first time, we will have fully automated, hands-off, drilling capability," Glass said. "Since we can't see down the hole, we have sensors on the drill. The sensors include laser vibrometers and accelerometers. These are instruments to capture the vibrations of the drill shaft. The sensors feel the vibrations from what's happening toward the tip of the drill."

"We are using neural network software and (other) techniques to automatically diagnose the various encountered drilling conditions like binding, choking, jamming, hard target interfaces and inclusions," said Sathya Hanagud from Georgia Institute of Technology, Atlanta, the DAME vibrations sensing and detection co-investigator. "The neural network software will also learn as the drilling operation proceeds. As additional data are acquired, the software will check the data against the baseline computer model of the system and update the system model and the diagnosis model," Hanagud added.

"In earlier lab testing we have done things to stress the controls and verify them, like throw rocks down the hole or try to freeze it with added ice. In this final test, we're going to put it into virgin rock where we don't know what's down there and let it run," Glass said.

"Just for the sake of completeness after we demonstrate hands-off operation, we will make sure that we also test all the potential major faults there," he said. "We'll have a wireless computer network back to the Devon Island base camp from the drill site and back to NASA for remote technical support to the field."

The DAME project is sponsored by the Mars Instrument Development Project, part of NASA’s Mars Exploration Program. For more information about this project visit:

In addition, the Mars Technology Program partnered with the DAME team. For more information about that program, please visit:

Publication-size images and an on-line video are available on the World Wide Web at: