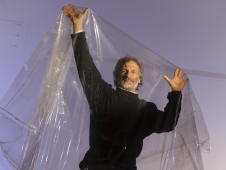 Trent is standing under a forward-osmosis enclosure that he recently patented for ocean deployment of algae.
Photo Credit: NASA Ames Research Center
Click image for full-resolution. After earning his Ph.D. in Biological Oceanography at Scripps Institution of Oceanography, University of California at San Diego, Jonathan Trent spent six years in Europe at the Max Planck Institute for Biochemistry in Germany, the University of Copenhagen in Denmark, and the University of Paris at Orsay in France. He returned to the United States to work at the Boyer Center for Molecular Medicine at Yale Medical School for two years before establishing a biotechnology group at the Department of Energy's Argonne National Laboratory in Illinois.

In 1998, he moved to NASA Ames Research Center, where he established the Protein Nanotechnology Group. These researchers focus on building nanostructures using biomolecules from extremophiles-organisms adapted to extreme environments, such as high temperatures, high or low pH, ionizing radiation, or saturated salts. Using these robust biomolecules, and manipulating molecular recognition and self-assembly with genetic engineering, his team has built patterned nano-particle arrays for data storage and molecular scaffolds for enhancing enzyme activities.

In addition to working at NASA, Trent was appointed Adjunct Professor in the Dept. of Biomolecular Engineering at the University of California at Santa Cruz in 2004. Two years later, he was awarded the prestigious Nano50 award for Innovation in Nanotechnology, and was elected Fellow of the California Academy of Sciences. Since then, Trent has initiated Global Research into Energy and the Environment at NASA (GREEN) with support from Google. Among other projects, Trent and the GREEN team are developing systems for producing a sustainable, carbon-neutral feedstock for the biofuels of the future. Trent's recent research and inventions are focused on methods for obtaining alternative fuels, processing municipal wastewater, and economically producing freshwater by desalination. In April 2009, he organized and led an international conference in Denmark entitled: Wind, Sea, and Algae.