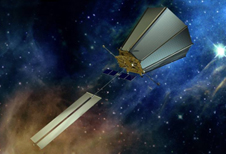 The new optics system will be installed into a telescope similar in appearance to the one shown.
Credit: NASA 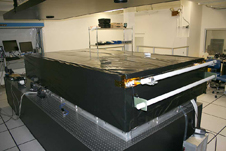 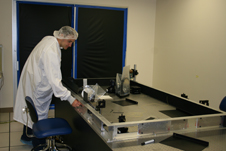 The PIAA lenses, the heart of the system, are reshaping the incoming beam.
Credit: NASA / Michael Connelley 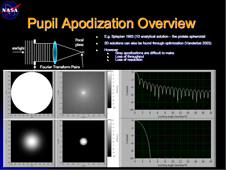 NASA's new coronagraph laboratory is pushing development of a new optics system to enable scientists to observe Earth-like planets that otherwise would be lost in the glare of the stars they orbit.

A coronagraph is a telescope that masks the bright disk of a star, so that faint objects near the star can be studied. The new coronagraphic laboratory is called the Ames Coronagraph Experiment (ACE) Laboratory.

Only 15 years ago, other planets outside our Solar System were unknown. While astronomers expected other stars to have planets, called exoplanets, any discussion of their search seemed unrealistic, say scientists.

Today, scientists generally monitor the changes to a star's motion, but this requires the star's exoplanets to be more massive than Earth. In fact, most recently discovered planets are big gas giants like Jupiter, a mass 300 times that of Earth. In addition, most exoplanets do not fall within the habitable zone; they are either too hot or too cold. A habitable zone, sometimes called the "Goldilocks zone," is the distance from the star where the temperature allows liquid water to exist on the surface of the planet orbiting the star, according to astronomers.

"Conventional space telescope technologies allow too much glare and diffraction from the star, which overwhelms the detection of extrasolar Earths orbiting the star," said Mark McKelvey, the project manager of the ACE Laboratory.

When viewed from Earth, exoplanets are about ten billion times dimmer than their stars. "The technical difficulty is like trying to photograph a firefly that is flying around a high-intensity searchlight ten miles away," explained Ruslan Belikov, an astrophysicist at NASA Ames and the technical lead of the Ames coronagraph laboratory.

Some technologies, although ingenious, have addressed this problem, but are not optimally efficient and require a large expensive telescope. As an alternative method, a new technology, called Phase Induced Amplitude Apodization (PIAA), was recently invented by Dr. Olivier Guyon from the Subaru Telescope in Hawaii of the National Astronomical Observatory of Japan (NAOJ). He was assisted by Robert Vanderbei from Princeton University, New Jersey, and Wesley Traub from NASA's Jet Propulsion Laboratory (JPL), Pasadena, Calif. A high performance prototype of this new design concept is being developed by NASA Ames in collaboration with NASA JPL, the University of Arizona, and the NAOJ.

The PIAA system uses two specially designed non-spherical mirrors to reshape the light in the pupil of the telescope into a new "high-contrast" pupil pattern. This new high-contrast pupil has the special property of confining all diffraction and glare from the star into a small spot, which virtually blocks all the starlight without appreciably affecting the light from the planet.

"This technology can enable imaging of extrasolar Earths within the current NASA budget limitations. It also can enable a future flagship mission, say a four-meter telescope or larger, not only to detect possibly hundreds of Earths, but also to sense the presence of biomarkers such as oxygen, water, and methane on such small worlds. The implications of such a discovery are, of course, staggering," said Belikov.

But will the new technology work in space?

The design concept started in 2006. NASA invited scientists to propose special projects for its Discovery Program. A team of scientists, including NASA Ames scientists, led by Guyon, proposed building a 1.2 meter telescope to discover and characterize giant planets around nearby stars. The project, named Telescope to Observe Planetary Systems (TOPS), introduced PIAA as a coronagraph concept for small telescopes. The goal was to build a telescope that would provide higher resolution and greater contrast, without losing light or using bigger mirrors. If successful, telescopes will be smaller and planet-finding missions will cost less. The proposal evaluators rated the science outstanding, but considered the technology too risky. To be used in space, it required further development.

"We had a one-month deadline. In that time, our team was able to write a proposal that addressed many diversified issues, including management, science and technology," said Julie Mikula, of NASA Ames, who was the project manager for the proposal.

To reach a higher level of technical readiness, the TOPS collaborators have to demonstrate the capability of the optical system. But first they needed funding. Between 2006 and 2007, they submitted three proposals to the NASA Innovative Partnership Program (IPP). Although competitive, they won funding for two years from NASA Headquarters with matching funds from Ames, NAOJ, and Lockheed Martin Space Systems Company, Palo Alto, Calif.

Now with an annual budget, including Ames and IPP funding, Ames scientists prepared their testing requirements. A new clean room testing facility was built at Ames, including the installation of a testbed similar to the testbed used by the Subaru Telescope. NASA Ames awarded procurement contracts to L3 Communications Tinsley Laboratories, Inc., Richmond, Calif. and Boston Micromachines Corp., Cambridge, Mass. for the manufacture of specialized PIAA and deformable mirrors, the most essential parts of the prototype. The University of California at Santa Cruz also is working with Ames in a cooperative agreement on the project.

The ACE Laboratory is a high contrast laboratory that will test the technology development for exoplanet imaging. It will have a high-performance testbed, which includes an optical table, light sources, masks, thermal enclosures, science cameras, computers, and software. The testbed will rapidly prototype optical concepts in air. As planned, the first tests will be a non-stabilized air operation that scientists believe will disturb the rays of light and prevent the test from reaching its goal of detecting an exoplanet near a star in space. These tests will establish the baseline for future tests. The next stage of testing will be a stabilized air operations, in which a temperature control system will be built and tested. Once the temperature is controlled, the contrast will be tested for PIAA lenses in monochromatic light, and later for the PIAA mirrors in broadband light. The final stage will be done on the High Contrast Imaging Testbed at JPL, where the capability of the optical system will be demonstrated under space-like conditions using a vacuum tank.

"We are testing an optics system that is breakthrough technology. The Subaru Telescope testbed showed that the PIAA concept is promising, and the Ames experiments will show whether it works well enough to study the surfaces and atmospheres of exoplanets" said Tom Greene, an astrophysicist at NASA Ames who serves as the project's director.

The testing is currently underway and is expected to start meeting technology requirements for exoplanets imaging in the first half of 2009.