Sensor Being Developed to Check for Life on Mars 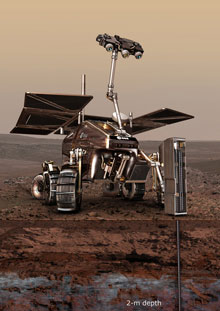 NASA-funded researchers are refining a tool that could not only check for the faintest traces of life's molecular building blocks on Mars, but could also determine whether they have been produced by anything alive.

The instrument, called Urey: Mars Organic and Oxidant Detector, has already shown its capabilities in one of the most barren climes on Earth, the Atacama Desert in Chile. The European Space Agency has chosen this tool from the United States as part of the science payload for the ExoMars rover planned for launch in 2013. Last month, NASA selected Urey for an instrument-development investment of $750,000.

The European Space Agency plans for the ExoMars rover to grind samples of Martian soil to fine powder and deliver them to a suite of analytical instruments, including Urey, that will search for signs of life. Each sample will be a spoonful of material dug from underground by a robotic drill.

"Urey will be able to detect key molecules associated with life at a sensitivity roughly a million times greater than previous instrumentation," said Dr. Jeffrey Bada of Scripps Institution of Oceanography at the University of California, San Diego. Bada is the principal investigator for an international team of scientists and engineers working on various components of the device.

To aid in interpreting that information, part of the tool would assess how rapidly the environmental conditions on Mars erase those molecular clues.

Dr. Pascale Ehrenfreund of the University of Leiden in the Netherlands, said, "The main objective of ExoMars is to search for life. Urey will be a key instrument for that because it is the one with the highest sensitivity for organic chemicals." Ehrenfreund, one of two deputy principal investigators for Urey, coordinates efforts of team members from five other European countries.

Urey can detect several types of organic molecules, such as amino acids, at concentrations as low as a few parts per trillion. 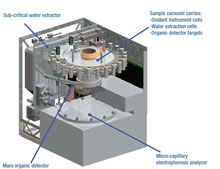 All life on Earth assembles chains of amino acids to make proteins. However, amino acids can be made either by a living organism or by non-biological means. This means it is possible that Mars has amino acids and other chemical precursors of life but has never had life. To distinguish between that situation and evidence for past or present life on Mars, the Urey instrument team will make use of the knowledge that most types of amino acids can exist in two different forms. One form is referred to as "left-handed" and the other as "right-handed." Just as the right hand on a human mirrors the left, these two forms of an amino acid mirror each other.

Amino acids from a non-biological source come in a roughly 50-50 mix of right-handed and left-handed forms. Life on Earth, from the simplest microbes to the largest plants and animals, makes and uses only left-handed amino acids, with rare exceptions. Comparable uniformity -- either all left or all right -- is expected in any extraterrestrial life using building blocks that have mirror-image versions because a mixture would complicate biochemistry.

"The Urey instrument will be able to distinguish between left-handed amino acids and right-handed ones," said Allen Farrington, Urey project manager at NASA's Jet Propulsion Laboratory, which will build the instrument to be sent to Mars.

If Urey were to find an even mix of the mirror-image molecules on Mars, that would suggest life as we know it never began there. All-left or all-right would be strong evidence that life now exists on Mars, with all-right dramatically implying an origin separate from Earth life. Something between 50-50 and uniformity could result if Martian life once existed, because amino acids created biologically gradually change toward an even mixture in the absence of life. 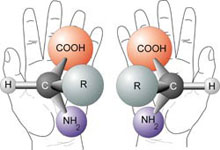 Right: Nature makes hundreds of types of amino acids. Twenty different types are the basic building blocks of proteins. In this illustration of the molecular structure of a generic amino acid, the part labeled "R" is the variable part, which is different for each type of amino acid. Nearly every type of amino acid can exist in two different forms, often referred to as "left-handed" and "right-handed." The two forms have the same component atoms and bonds as each other, but they mirror each other the way a person's two hands mirror each other. Nearly all amino acids produced and used by living organisms on Earth are the form called left-handed. In the illustration, C represents a carbon atom, H a hydrogen atom, NH2 an amine group, and COOH a carboxyl group. The variable R can be anything from a single hydrogen atom to chains or rings of multiple carbon atoms and other atoms. Image credit: NASA/JPL/UCSD

The 1976 NASA Viking mission discovered that strongly oxidizing conditions at the Martian surface complicate experiments to search for life. The Urey instrument has a component, called the Mars oxidant instrument, for examining those conditions.

The oxidant instrument has microsensors coated with various chemical films. "By measuring the reaction of the sensor films with chemicals present in the Martian soil and atmosphere, we can establish if organisms could survive and if evidence of past life would be preserved," said Dr. Richard Quinn, a co-investigator on Urey from the SETI Institute, Mountain View, Calif., who also works at NASA Ames Research Center, Moffett Field, Calif. 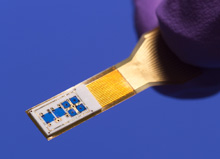 Left: This is an image of the current version of the oxidant sensor instrument to be integrated into the Urey instrument package for use on the European Space Agency's ExoMars rover planned for launch in 2013 to the red planet. The Mars Oxidant Instrument (MOI), was developed at NASA Ames Research Center, Moffett Field, Calif., in collaboration with the SETI Institute, Mountain View, Calif., and NASA's Jet Propulsion Laboratory, Pasadena, Calif. + More Information

"In order to improve our chances of finding chemical evidence of life on Mars, and designing human habitats and other equipment that will function well on Mars' surface, we need to improve our understanding of oxidants in the planet's surface environment," said Dr. Aaron Zent, a Urey co-investigator at NASA Ames.

A Urey component called the sub-critical water extractor handles the task of getting any organic compounds out of each powdered sample the ExoMars rover delivers to the instrument. "It's like an espresso maker," explained JPL's Dr. Frank Grunthaner, a deputy principal investigator for Urey. "We bring the water with us. It is added to the sample, and different types of organic compounds dissolve into the liquid as the temperature increases. We keep it under pressure the whole time."

The dissolved compounds are highly concentrated by stripping away water in a tiny oven.

Then a detector checks for fluorescent glowing, which would indicate the presence of amino acids, some components of DNA and RNA, or other organic compounds that bind to a fluorescing chemical added by the instrument.

A Urey component called the micro-capillary electrophoresis unit has the critical job of separating different types of organic compounds from one another for identification, including separation of mirror-image amino acids from each other. "We have essentially put a laboratory onto a single wafer," said Dr. Richard Mathies of the University of California, Berkeley, a Urey co-investigator. The device for sending to Mars will be a small version incorporating this detection technology, which is already in use for biomedical procedures such as law-enforcement DNA tests and checking for hazardous microbes.

Switzerland will provide electronics design and packaging expertise for Urey. Micro-Cameras and Space Exploration S.A., Neuchatel, will collaborate with JPL and the European Space Agency to accomplish this significant contribution to the heart of the instrument. Dr. Jean-Luc Josset, Urey co-investigator at the University of Neuchatel will coordinate this effort and help provide detector selection and support. JPL is a division of the California Institute of Technology in Pasadena.