Kepler is a NASA 'Discovery' mission that scientists have designed to survey our region of the Milky Way galaxy to detect potentially hundreds of Earth-size and smaller planets in or near habitable zones. A habitable zone is the distance from a star where liquid water could exist on the surface of a planet orbiting that star.

"It's the most important endeavor NASA is undertaking, in my opinion," ventured William Borucki, a space scientist and Kepler's principal investigator who works at NASA's Ames Research Center in California's Silicon Valley, where the mission was conceived and where science operations will be conducted. "We are trying to find man's place in the universe. The first step in doing that is finding Earth-like planets. Ultimately, we'll travel to the stars to see who is there," Borucki predicted.

"Since we first proposed Kepler in 1994, scientists have detected more than 200 extra-solar planets," said astrophysicist David Koch of Ames, Kepler's deputy principal investigator. However, almost all of these are gas-giant planets, and the virtue of Kepler is that it is able to find Earth-size and smaller planets -- that is, planets more than 300 times smaller in mass than Jupiter, Koch observed.

Kepler will be the first space telescope specifically designed to find Earth-size planets in the habitable zones around distant stars. The spacecraft is scheduled to launch in November 2008 on a Delta II rocket from NASA's Kennedy Space Center, Florida. Kepler will look for periodic dimming of stars, or transits, as clues that would reveal the presence of intervening planets along the craft's line of sight.

How did the search for planets beyond our solar system begin? Why did astronomers want to launch a telescope into space to look for 'extra-solar' planets? In the imagination of science fiction writers, the universe teems with planets inhabited by a variety of exotic creatures. But in reality, we did not detect any planets beyond our solar system until recently. Astronomers could not observe these mostly gas-giant planets orbiting stars, but instead used indirect methods to find those distant worlds.

Not many years ago, telescopes observed stars that wobble, a telltale sign that large, Jupiter-size or larger gas planets were orbiting the stars, according to astronomers. Observers then noticed that some of these stars dimmed, then brightened again regularly, providing further evidence that planets are orbiting those far-away suns as well and reducing observed starlight when the planets pass between their home stars and Earth. 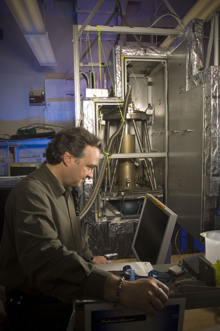 Looking for planets orbiting other stars is difficult with Earth-based telescopes that have to peer through Earth's atmosphere. The starlight is 'polluted' by the nocturnal lights cast by cities, and the smoke and smog of civilization and by other natural distortions created by our atmosphere. Even the Hubble Space Telescope, which orbits Earth, is limited because it is not designed to stare intently for years at just one small section of the Milky Way. To overcome these and other problems encountered by Earth-bound telescopes, astronomers suggested that a new telescope that can detect Earth-size and smaller planets in habitable zones be launched into space. This new telescope would be expressly designed to look for star-dimming 'transits.'

"(The idea for Kepler) started with a paper by Frank Rosenblatt in the late 1970s. He was a neurosurgeon. He wrote a paper and envisioned how one might use transits to find planets. I read this paper, and it inspired me," said Borucki.

Kepler will include a lens, a primary mirror and a charge-coupled device (CCD) array for collecting light. The CCD array is similar, but bigger than, the CCDs that replace film in consumer, digital cameras.

"The Kepler focal plane is made up of 95 megapixels, unlike a digital home camera, which might be five megapixels," Koch explained. As of February 2007, the CCD photometer array was nearing completion, and engineers were planning for spacecraft assembly and testing at Ball Aerospace, Boulder, Colo. The new optics system on Kepler, including its mirror and telescope, will focus pinpoints of light from 100,000 Milky Way stars onto the light-sensitive (CCD) array, according to Koch.

After launch in 2008, Kepler will soar away from the Earth, and in a few days the spacecraft will be past the moon's orbit. Kepler's final orbit will be around the sun, trailing Earth.

Scientists expect the spacecraft to drift slowly until it is about 46.5 million miles (75 million kilometers) behind the Earth in four years. Scientists designed the orbit to give the spacecraft a stable view of the 100,000 stars being examined and to keep Kepler's view of those stars from being blocked by the sun or moon. Researchers planned the Kepler mission to last four years with the potential to extend it an additional two years. 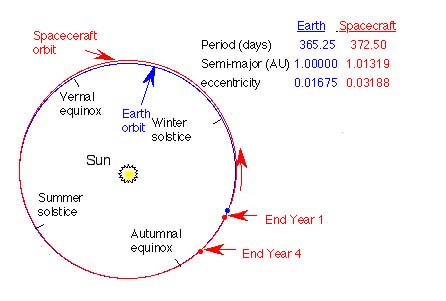 "If you're thinking about the Earth traveling around the sun, Earth goes around once a year. So, you need to observe for at least three years, and preferably four years, to be more certain statistically that a planet has been spotted," Borucki explained. Scientists theorize that the smaller stars will yield useful data first because the planets will be closer to their suns and orbit them in less than an Earth year, according to Borucki.

Like a photographer's light meter, the CCD array will not capture actual images of planets, but instead will look for starlight that dims and brightens again on a regular timetable. This periodic variation of starlight may indicate that planets could orbit these stars. Planets would be passing between their stars and Earth, causing the starlight reaching the Kepler spacecraft to be weakened, once for each planet's 'yearly' orbit. Planets' years will vary in comparison to Earth years, depending on how far away from their home star they orbit, and how fast they orbit.

According to Koch, Kepler would look at the same field of view in space, a region along the Orion arm of the galaxy for at least four years. "We needed to find a region that is never blocked by the sun and has a high density of stars," Koch explained.

"Think of Kepler as a hundred-thousand channel photographic light meter," Koch continued. "We need to count lots of photons. A typical measurement is a billion photons of light per hour for each star that we measure. What we have to look for are changes of 100 parts per million or smaller," Koch observed. Photons are elementary particles that make up all forms of light and other kinds of radiation such as heat or radio waves.

The brightness change that would show the signature of an Earth-size transit across its star would last for two to 16 hours, according to Koch. "Kepler must process 95 million pixels every five seconds, and the spacecraft must measure the brightness of all 100,000 stars once every 30 minutes," he explained. A pixel is derived from two words, 'picture element,' which is the smallest unit or piece of a computer, television or similar image.

"The chances of detecting a planet in the habitable zone of a star are about a half of a percent. Therefore, tens of thousands of stars need to be monitored continuously (at least once every hour) in order to detect hundreds of planets," Koch said.

"We store the data on the spacecraft for a whole month, and we have 16 gigabytes of data storage on Kepler," Koch noted. Kepler will transmit its data to Earth every 30 days via NASA's Deep Space Network.

The network will carry the data to the mission operations center at the University of Colorado, Boulder. There are two kinds of data -- engineering data and science data. The center staff will use the engineering data to monitor the health of the spacecraft and its key component, the CCD photometer. The science data will travel to the Space Telescope Science Institute in Baltimore, Md., where researchers will archive Kepler's raw science information.

Researchers in Baltimore will relay raw science data to the science operations center at Ames for analysis and interpretation. Computers will examine the data from the stars to locate any potential dimming caused by planetary transits.

Koch expects to derive information about the planets' orbits and sizes from the data the Kepler spacecraft will deliver. "The data will also show the frequency of planet formation for inner planets and the distribution of planetary sizes, orbital sizes and co-planetary effects of Jovian type planets," Koch said.

"The Kepler mission will perform an unbiased search for all orbital periods out to a 'martian orbit,’" Koch observed. He said the region around a star extending out to a martian orbit should be explored because models show that "molecular cloud collapse" can be expected to produce, on the average, four inner planets between the orbits of Mercury and Mars. “Two of these are approximately Earth-sized and two are smaller," Koch noted.

"If there are many planets around a star, we should know how many planets there are, how big and how far away from the star they are, and if they are in the habitable zone," Borucki observed. "That happens if all the planets are in the same orbital plane."

According to Borucki, scientists will find out how frequently Earth-size planets form around stars. "From that, one will know whether, potentially, life is widespread or rare," Borucki said.

Scientists hope the Kepler mission will detect Mars-size to Jupiter-size planets in an estimated 700 planetary systems, according to Koch. If Kepler detects hundreds of Earth-size planets on which liquid water could exist, the discovery would be an exciting and very important one, according to astronomers.

"We are in the early stages of looking for Earth-size planets," Borucki said. According to scientists, if Earth-size planets are detected, astronomers might be able to look at them with advanced telescopes not yet developed.

As many as 250 people are working on Kepler across the nation. NASA’s Jet Propulsion Laboratory is responsible for management of the project for NASA Ames Research Center and ensuring the flight system is successfully delivered and performing in orbit. NASA Ames is managing the development of the ground system and will conduct scientific analysis. Ball Aerospace and Technologies Corp. is developing the flight system (spacecraft and photometer) and participating in mission operations. Ames will manage flight operations after commissioning is completed. Commissioning is the period after launch when the spacecraft's systems and the photometer will be checked to ensure they are working properly and ready to begin routine science operations.

For more information about the Kepler mission, please visit:

For images related to this story, please visit: