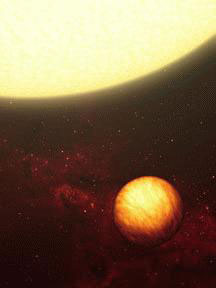 Using images from the Spitzer Space Telescope, astronomers can now estimate the weather of a Jupiter-like exoplanet as it orbits a Sun-like star that is about 60 light-years away.

For the first time, scientists can map the atmosphere of a planet orbiting its parent star, by observing changes in the planet’s infrared brightness over time. The planet is tidally locked to its star like our moon is to Earth, which means that the same side of the planet always faces the star, and it is divided into permanent day and night. However, because the night side is nearly as hot as the day side, scientists say that fierce winds must be redistributing the heat from the starlit side to the dark side. In addition, the hottest part of the planet is shifted from the location that receives the most starlight. The results of this NASA-funded research will appear in the May 10 issue of the journal Nature.

“Now that we have this brightness/temperature map, we can learn a lot about this planet. We now believe that this planet is a very windy place; the speed of the west-to-east winds is probably several kilometers /second. We reached this conclusion because the brightest spot on the planet is not right in the middle of the map. The point in the middle of the map receives the most starlight, but it is not the hottest,” explained Jonathan Fortney, a planetary scientist at the Carl Sagan Center, Mountain View, Calif. who works at NASA Ames Research Center, Moffett Field, Calif. He is also a co-author of this study. ”The hottest (brightest) spot is offset by about 30 degrees, meaning that winds are blowing this hottest spot downstream.”

If there were no winds, the location on the planet that is permanently at high noon, with the blazing star directly overhead, would be hottest, as it constantly receives the most starlight. However, scientists have measured the hottest spot on this exoplanet, and it is 30 degrees to the east of the high noon spot. This means that the winds are so strong that they are blowing this hot gas about 25,000 miles away.

In the past, researchers have been able to detect the presence of planets outside our solar system, called extrasolar planets, and determine their size and location. Today, scientists use observations of infrared light (heat radiation) to determine atmospheric conditions and varying temperatures at different places on these planets.

For this study, scientists focused on a gas giant called HD 189733b, which is more than 30 times closer to its star than the Earth is to the Sun. It is a transiting planet, meaning it eclipses its parent star. Observations spanned slightly more than half of the planet’s orbit. As the day side of the planet rotated into view, scientists detected the increase in brightness and calculated its temperature range.

Right: Scientists discovered that the brightest point in the middle of the map is not the hottest point on the orbiting planet. The hottest spot is offset from the brightest spot by about 30 degrees, meaning fierce winds are blowing it downstream.

To study gas giant planets, atmosphere models are used to understand the contrast between day and night temperatures. Models of atmospheric chemistry help scientists understand where in the planet's atmosphere light is absorbed and emitted. Some important gases are water vapor, carbon monoxide, and atomic sodium and potassium. If estimates are accurate, scientists think that supersonic wind speeds exceeding four times the speed of sound may be necessary to transport the energy to the night side.

This work was made possible through funding by NASA as part of a long-term research program.

This study will appear in the May 10 issue of the journal Nature, 2007.